From the molecular world: a nineteenth century science fantasy 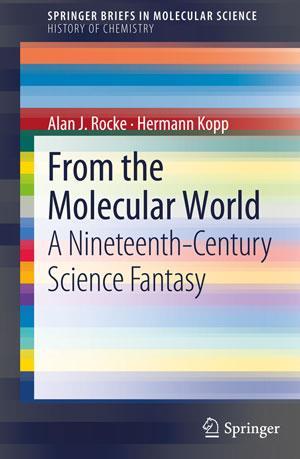 Perhaps only readers of Chemistry World who are historians of chemistry will have come across Hermann Kopp (1817–1892) before. He was the author of a four-volume history of chemistry, published between 1843 and 1847, and a good friend to Robert Bunsen. Both were on the staff of the University of Heidelberg, Germany, with Kopp concentrating on his historical studies and research into what would now be described as physical chemistry. Towards the end of his scientific life, around 1876, he put to paper some musings on the molecular structure of matter and later decided that, if published, the 105 page book would make an acceptable gift to mark Bunsen’s 71st birthday in 1882.

The premise of the book is a tour of an aerarium (a bit like an aquarium) made up of containers into which one could peer to gain visual insights into the world of atoms and molecules. For instance, early on, Kopp describes the coming together of ‘one-handed’ atoms of hydrogen linking up, hand in hand, to form molecules of H2. It’s not a children’s book, however, and soon we are in deep waters looking at the various theories that, in the recent history, had attempted to explain molecular constitution. Readers are not particularly helped by Kopp’s prolix Germanic writing style with its extra-long sentences containing clause after clause, and his continual allusions to earlier non-scientific literature and all-but-forgotten figures of the past.

Historian Alan Rocke has produced a translation of Kopp’s book, detailed its genesis and reception, and included a potted biography of Kopp himself. By means of some 242 footnotes he guides us through Kopp’s allusions and obscure quotations, though he admits that a few, in the end, defeated him. This curiosity is not really for the general reader, but it will appeal to historians of chemistry with a particular interest into what was going on in our subject in the second half of the 19th century.

Purchase this book at Amazon.co.uk.