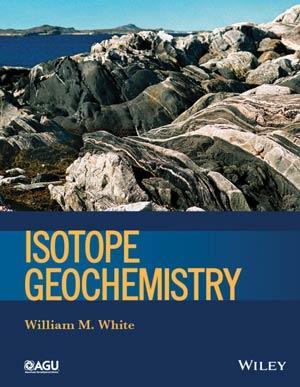 It is little more than a century since the initial discovery of isotopes. Today, scientists exploit the behaviour of a vast array of isotopes across the entire periodic table in a wide range of applications. Many aspects of geological science depend on the interpretation of isotopic effects, including the origin of the Solar System, the Earth’s age and composition, the structure of the mantle, geochemical cycling in the crust, the evolution of life, and climate change. Radiogenic isotopes are the basis of geochronology, as well as being powerful geochemical tracers. Both fields have benefited from recent advances in analysis that have allowed ever more precise measurements of isotope ratios for elements at increasingly lower abundance.

Isotope geochemistry by William White is a comprehensive single volume that encompasses almost every imaginable aspect of both radiogenic and stable isotope geochemistry in remarkable detail. Few other textbooks cover both fields in such depth.

The book has evolved from a course of the same name taught by White at Cornell University, US. It includes an introduction to nuclear physics and nucleosynthesis, fundamental derivations of radioactive decay equations and isochrons, the theory of stable isotope fractionation, and an appendix on mass spectrometric methods for isotope measurement.

Each isotopic system is also treated individually with a historical background, as well as numerous references to recent literature and debates. The thorough treatment of what might be considered as a somewhat dry subject is made accessible by a conversational writing style and clear mathematical derivations. The layout is clean and appealing, with use of a single colour (orange) that allows figures to stand out. Problem sets at the end of each chapter require detailed and quantitative understanding of the material. An associated website, providing downloadable versions of all figures and tables, is a valuable resource for teachers.

Unfortunately, the text is marred by a large number of editing and factual errors. Also, the use of orange in the figures seems to have postdated the figure captions, which can lead to confusion. These errors are a disappointing detraction from what is an otherwise excellent book.

This book is purportedly a textbook for an undergraduate or postgraduate course in isotope geochemistry. I would be wary of adopting this edition as a textbook though due to the number of errors in the text and hope that a second edition will be better. Saying that, it goes far beyond the amount of material that could be covered in a single semester. The text is an invaluable and comprehensive reference for any practicing geoscientist who needs a refresher, or simply an introduction to everything from basic geochronology to exotic isotope systems. I would recommend the book to my colleagues, and commend the author for producing a volume of exceptional breadth and depth.