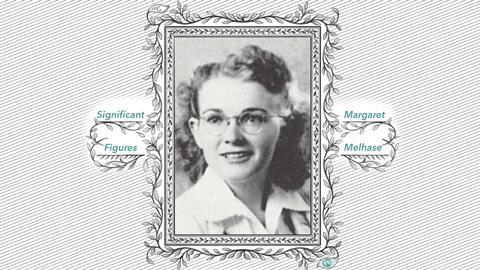 The person who discovered the radioactive isotope caesium-137 – which is today one of the most widely used radionuclides in the world – was Margaret Melhase. What’s more, she did it as an undergraduate chemistry student at the University of California, Berkeley, in the US. Her remarkable finding in 1941 came about because Melhase managed to convince Glenn Seaborg, a rising star in nuclear chemistry, to set her up with a research project and lab space on the top floor of the university’s old chemistry building.

Working in that somewhat decrepit annex, which was dubbed the ‘Rat House’, Melhase was given 100g of a neutron-irradiated uranium compound to study. ‘She spent the next several months extracting the elements of other groups and analysing what was left. Most of the residual activity precipitated out with silicotungstate, identifying it as caesium,’ radiologist and historian Dennis Patton wrote in an April 1999 Journal of Nuclear Medicine article.

The activity was intense enough to measure with an electroscope and after it didn’t appear to diminish over the next two weeks, it became apparent that this isotope of caesium had a very long half-life, which later turned out to be 30 years. Her findings corroborated Seaborg’s theory that fission must produce group 1 elements.

Although the real significance of this discovery was not evident at the time, Patton wrote that it established Melhase as a promising young experimental radiochemist. Because Seaborg had the knowledge of fission and access to fission products through the Berkeley cyclotron, she was situated exactly where she needed to be to make a substantial scientific contribution.

Gilbert Lewis refused to let her pursue a graduate degree

‘While she was doing this science project, in an attic space up above at night people were discovering the plutonium substance that was going to change the world,’ says science historian Kit Chapman, author of Superheavy, which recounts stories behind the periodic table. ‘So, she was just in the right place at the right time,’ he notes.

But the very fact that this work occurred during the second world war meant that it was highly classified, along with all nuclear research, so the findings went unpublished and unrecognised for quite some time.

‘Nuclear fission had only been discovered right at the end of 1938, and immediately there was the second world war, so there were a couple of places doing research but very, very few, and one of those places happened to be UC Berkeley,’ Chapman explains. ‘So when she was given the sample by Art Wahl, who was a graduate student of Glenn Seaborg’s working on plutonium at the time, Seaborg had this inkling that there might be something there – that there might be an isotope – but no one was completely sure.’ He emphasises that it is incredible for somebody to discover a unique isotope as an undergraduate, calling Melhase’s research ‘a phenomenal piece of work.’

Although the breakthrough’s importance didn’t become clear for years, caesium-137 is now used in medical radiotherapy to treat cancer, as well as to measure radiation from accidental releases, and geologists also utilise it to assay rocks.

In the wake of Melhase’s discovery, Seaborg went on to share the 1951 Nobel prize in chemistry, serve as an advisor to at least nine US presidents, and an element was named in his honour in 1997. Melhase, on the other hand, disappeared into virtual obscurity. She graduated from UC Berkeley with an undergraduate degree in chemistry in 1941, and abruptly hit a roadblock when the chair of the university’s chemistry department – Gilbert Lewis – refused to let her pursue a graduate degree.

Apparently, a previous female student of Lewis’s had earned a doctorate and summarily left science to get married and have children. ‘He considered that a waste of a PhD, a waste of his time and the university’s time, and therefore decided to block Melhase purely because of gender,’ Chapman says. ‘Even though Berkeley was considered more liberal, he could get away with that.’

My kids will never get over the thought that Glenn Seaborg had to ask anybody anything about radioisotopes – least of all their mother!

Blockades aside, she was among an elite group of scientists chosen to work on the Manhattan Project – the secret US-led effort to beat Nazi Germany in the race to develop a nuclear weapon. Melhase also worked briefly work for the Philadelphia Quartz Company in California. Then in 1945 she married Robert Fuchs – a maths professor at Berkeley whom she had met at a local folk dance – and soon after ended her career in science and became a stay-at-home mother of three.

‘She said the dean of the chemistry department said what was the point in taking women because they would just get married and have children, which was a pretty common sentiment – it was totally expected,’ Melhase Fuchs’s daughter Margaret Melaney tells Chemistry World. ‘She went on and did other things, and I think she really didn’t look back, I don’t think there was any bitterness,’ says Melaney, who is the oldest of Melhase Fuchs’s children.

‘My dad was working at UC Berkeley too, and he said that he could support her so she could stop working,’ Melaney recalls. They later moved to Los Angeles.

In fact, if it wasn’t for Patton’s interest and publicity, Melhase Fuchs might have remained unknown when she died in August 2006. In the 1990s, he shed light on her contribution to science by, for example, showcasing a 1969 letter that Seaborg wrote to Melhase Fuchs to seek more information about her work separating caesium-137 for one of his talks. In her reply, she commented: ‘My kids will never get over the thought that Glenn Seaborg had to ask anybody anything about radioisotopes – least of all their mother!’

Melaney remembers the letter. ‘At the time, I think she said something like “Somebody wrote me a letter, did you know you had a mother that did this?” We said “That’s nice.”’ She says her mother didn’t become well-known until about 20 years ago when there was more interest in women scientists.

Melhase Fuch’s mother and father – prominent geologist John Melhase – were both very supportive of her research career. In fact, her father built her a chemistry lab in the backyard of their Berkeley home when she was in college. ‘She used it for trials and experiment – by the time I lived there it was locked up,’ Melaney recounts.

The backyard lab was not the only clue to her mother’s past, however. Her former lab colleagues remained close family friends who would visit often. ‘Quite a few of her chemistry co-workers turned out to be folk dancers too,’ Melaney recalls. ‘Glenn Seaborg and his wife Helen were,’ she adds. ‘Many of them, including my mother, were investigated during the McCarthy era – my grandmother once chased an agent out of a tree during a friendly gathering of my mom’s friends at her house.’

Her female contemporaries who were given the opportunity absolutely thrived

Melhase Fuchs’s other two children – both of whom predeceased her – were disabled, and she wondered if her lab work was partly to blame. ‘My mother suspected it was possibly a genetic problem due to her exposure to radiation,’ Melaney says. ‘Back in the day, when they were working with radioactive isotopes, they didn’t wear the sensors and lead shields that are worn today – they just sort of tossed the stuff around the lab and were very casual about their handling of the material.’

It is impossible to know how much more Melhase Fuchs would have contributed to science if she’d had been able to earn her PhD. But Chapman points out that her female contemporaries who had that opportunity – such as nuclear chemist Darleane Hoffman, who became a tenured chemistry professor at UC Berkeley and won the National Medal of Science in 1997 and the Priestley Medal in 2000 – absolutely thrived.

But her legacy endures nonetheless. ‘It is nice when I hear people in radiology say that they use caesium-137 to calibrate their machines – I say “That’s cool, my mother discovered it,”’ Melaney says. But she emphasises that her mother would want to be remembered for her political and humanitarian work rather than her chemistry research.

Her volunteer passions included helping refugees and migrant farm workers in Southern California. Specifically, Melhase Fuchs worked with the Hmong community – Indigenous people from China and Southeast Asia who came to the US as refugees in the late 1970s – and she also organised the annual Los Angeles ‘Crop Walk’ to increase awareness about the situation of migrant workers in the area. ‘That is where she put her energy after she left the sciences: into her political activism,’ Melaney says.

Rebecca Trager is senior US correspondent for Chemistry World