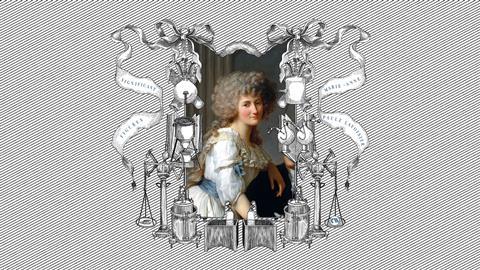 Could her famous husband have played such a key role in ‘the new chemistry’ without her? Hayley Bennett investigates

In the 1780s, French noblewoman Marie-Anne Paulze Lavoisier became embroiled in a scientific dispute that would reshape chemistry for ever. Most chemists believe that anything combustible contained the a fiery substance called phlogiston, which was released during burning, leaving just ‘calx’, a kind of ash. But not her husband.

Antoine Lavoisier was a chemist who opposed the phlogiston theory and other remnants of science that were more akin to alchemy than chemistry. He was a creator of what was called ‘the new chemistry’, based on key principles such as elements and compounds, and had published a new, methodical system for naming chemicals in his book, Méthode de nomenclature chimique. Under this system, the colourless gas that English chemist Joseph Priestly called ‘dephlogisticated air’ had a different name: oxygen. Antoine believed that oxygen together with the ‘inflammable air’ that he called hydrogen formed the compound water, while in the old theory, water was an elementary substance.

While it’s unclear whether Marie-Anne had any input in developing ‘the new chemistry’ or its naming system, as it was credited to her husband and three other (male) chemists, she was certainly instrumental in bringing down the theory of phlogiston. In 1787, Richard Kirwan, an Irish chemist living in London, published his Essay on Phlogiston. As her husband did not read English, it fell to her to translate Kirwan’s essay into French. Without her help, he (or they) would not have been able to critique and refute its contents, and eventually – through much toing and froing in the literature – overturn the flawed phlogiston theory.

Marie-Anne was more than just her husband’s translator. She was an assistant, a scientific illustrator and often the person observing and taking notes on his experiments as he worked. ‘Her handwriting was all over the laboratory notebooks,’ says Patricia Fara, a science historian at the University of Cambridge in the UK. ‘She was ordering in stock, writing out the results of the experiments… and that’s a very important part.’

As a woman in the 18th century, history for a long time assigned the obvious roles to her – wife, hostess, subservient helper. For Fara, though, the Lavoisiers were a team, and if they each had a defined role in that team then, she says, we can’t be too critical of those roles as that was just ‘how life worked’ then.

Born in 1758, Marie-Anne Pierrette Paulze was educated in a convent but only until age 12. In 1771, her father arranged for her to marry 28-year-old Antoine Lavoisier, avoiding a match with another man nearly four times her age. At the time, Antoine and Marie-Anne’s father were both ‘tax farmers’ with the Ferme générale, a tax collection operation that made money by collecting tax for the king. By all accounts, the pair got on very well and though Marie-Anne did apparently have a long-running affair, ‘[s]he conducted it with such discretion that no one seems to have suspected it until after her husband’s death,’ as Madison Smartt Bell wrote in her 2005 book.

Antoine poured his money into science experiments and without the distraction of children (they never had any) Marie-Anne seems to have thrown herself wholeheartedly into learning about and promoting her husband’s work. French society was not averse to scientific partnerships of this type and women were the hostesses of Italian-style ‘salon’ meetings of intellectuals, and so she found her own kind of freedom. She returned to her studies, taking lessons in chemistry – first with her new husband and then a collaborator – as well as English, Latin and, under the tutelage of famous neoclassical artist Jacques-Louis David, drawing.

By the time Marie-Anne was 17, the couple were hosting Monday night dinners for scientific notables at their home at the Paris Arsenal, where Antoine had taken up a post as commissioner for the Royal Gunpowder and Saltpetre Administration. Here they would remain for most of their remaining years together, experimenting and entertaining guests. An invitation dated 24th January 1783 from ‘Mr. et Mde. Lavoisier’ requests Benjamin Franklin’s presence for ‘some music after dinner’. Franklin, one of America’s founding fathers and a scientist himself, was involved in the gunpowder trade and received shipments from the French via Lavoisier.

In the attic at the arsenal, Antoine had set up a large and expensive laboratory where he and Marie-Anne received scientists from all over the world to witness their experiments. Each Saturday was devoted to science. Some decades later, Marie-Anne described this as his ‘day of happiness’. But it was obvious that she too took delight in those days. ‘[A] few young people proud to be granted the honour of cooperating on his experiments, gathered in the morning, in the laboratory,’ she wrote. ‘It was there that we took lunch, we discussed, we worked.’

In March 1785, the Lavoisiers were finishing a series of experiments on the decomposition and recomposition of water – experiments that Antoine viewed as some of the most crucial in bringing down the phlogiston theory. The decomposition experiment was designed so that as water flowed through the barrel of a rifle, it was decomposed by red-hot iron, the hydrogen collecting into glass bell jars. In the synthesis experiment, a jet of hydrogen was set alight as it flowed into a flask of oxygen. Members of the Royal Academy of the Sciences turned up to watch. Le Journal Polytype des Sciences et des Arts reported on the experiments the following year, alongside detailed drawings of the apparatus by Marie-Anne.

According to a 1959 paper, the notes on the 1785 water experiments ‘consist of nine separate sheets written in various hands’ so it’s possible Marie-Anne was one of those ‘hands’. She was credited only for the illustrations, however. In later drawings, of experiments on the chemistry of human respiration, Marie-Anne depicted herself seated at a table in the laboratory, taking notes. Because she was usually credited as a translator or illustrator, these drawings of her at work are some of the best evidence we have of her intimate involvement in her husband’s studies.

By 1787, when Kirwan’s phlogiston essay was published, Marie-Anne was nearly 30. She was by now armed with a formidable education and was quite capable of both translating and critiquing the essay. In fact, she wrote a preface to the French version with the explicit intention of undermining Kirwan’s stance before the reader even got to it – by alleging that the phlogiston theory was ‘always supposing, and sometimes contradicting itself’ rather than being based, like Lavoisier’s new chemistry, only on ‘established facts’.

At one point in this preface, she had the audacity to make what constituted almost a head count of scientists who had deserted the phlogiston hypothesis. The eminent French chemist Louis-Bernard Guyton-Morveau, for example, had been converted to Lavoisier’s way of thinking by his water experiments, alongside other combustion reactions. ‘These experiences, which can be explained in the simplest and most natural way in the new doctrine, seemed to him more than sufficient to make him abandon the phlogiston hypothesis,’ she wrote.

If you look back through history, there are thousands of invisible assistants who are actually making experiments work

As science historian Keiko Kawashima argued in a 2000 paper about her translation, this preface was a brazen attack on Kirwan and his disciples. ‘She refutes without hesitating the doctrine of the great scholars of the time,’ he writes.

Yet more evidence of her zeal for the subject comes from reports of her social engagements. Prior to the translation coming out, political commentator Arthur Young described Marie-Anne as a ‘woman full of life, meaning, knowledge, [who] had prepared an English lunch, with tea and coffee’. However, ‘the best meal’, he wrote, was his conversation with her about Kirwan’s Essay on Phlogiston.

In 1788, Marie-Anne’s famous drawing tutor painted a portrait of the pair that is often compared to his ‘The Loves of Paris and Helen’. But unlike Helen of Troy, who is pictured as submissive to Paris, Marie-Anne stares confidently into the eyes of the beholder. Art historian Mary Vidal suggested that it represented the Lavoisiers as ‘models of constructive social behaviour’, with Marie-Anne’s place ‘clearly in the work area with her husband’. Her art portfolio is also on display and, despite the preened appearance, she has the air of an accomplished woman on equal terms with her husband.

The following year, Marie-Anne contributed 13 illustrations to Antoine’s chemistry textbook, Traité Élémentaire de chimie. They were by now a publishing partnership. However, tensions in France were rising and just five years later, their collaborations came to an end as the Revolution raged. Despite his progressive outlook, Antoine – along with other royal tax collectors including Marie-Anne’s own father – was arrested and eventually guillotined for defrauding the state.

Following Antoine’s death, Marie-Anne continued to promote his legacy even after her remarriage to Benjamin Thompson, the British physicist. Though it’s uncertain if she was ever involved in further science experiments, she arranged the publication of Antoine’s memoirs in 1805 and wrote the preface herself. Yet though Marie-Anne does feature prominently in some accounts of his work she remains entirely absent from others. She is emblematic of the role of an ‘invisible assistant’. According to Fara: ‘If you look back through history, there are thousands of invisible assistants who are actually making experiments work and women are one particular category of invisible assistants. There are so many examples of women who were doing similar work for their husbands.’