Botanists, chemists and historians come together to recreate ancient alchemy of making mercury

Mercury inspired the earliest alchemical philosophers. The metal, commonly known as quicksilver, was thought to be more than an ordinary liquid or solid, but a substance that existed between the two, as well as between life and death, heaven and earth. And the desire to understand its strange nature drove some of the earliest alchemical studies, some of which date back more than 2000 years.

‘These recipes are not really for the production of mercury,’ says Lucia Maini, a chemist at the University of Bologna in Italy. ‘They’re more to grab the secret of its nature.’

Maini and co-authors have been combining modern chemical and historical research into four very early methods for creating mercury from cinnabar – a bright red mineral of mercury sulfide (HgS), once commonly used as a pigment, that’s been mined in Europe for more than 4000 years.

Metallic mercury was also sometimes found in cinnabar deposits, which may have suggested the connection to early alchemists, Maini says.

The study looks at alchemical descriptions of four very early ways of making metallic mercury from cinnabar. One of them is a ‘cold extraction’ method described in the 4th century BC in the writings of the Greek philosopher Theophrastus, the successor of Aristotle at the Lyceum in Athens. 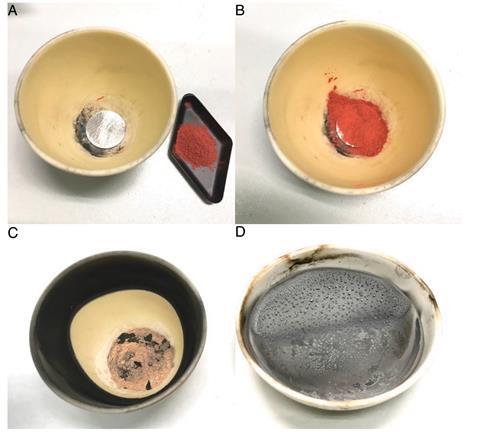 Reaction vessel with iron plate and cinnabar powder before the reaction (A and B) and after 10 minutes of heating using a Bunsen burner (C). The mercury condensed on the lid (D)

It’s taken several years for the group of chemists and historians at the University of Bologna to complete the study, which involved carefully recreating the alchemical recipes with modern chemical methods and determining the various chemical reactions that took place at each stage of each process.

Maini explains that a foundational goal of the group has been to better understand the language used in the ancient recipes. ‘The goal of replication may be described as an attempt to translate the technical lore of ancient alchemy into the modern language of chemistry,’ the researchers write. ‘We try to identify ingredients, understand reactions and measure variables about which ancient sources remain silent.’

In some cases, Maini says, ingredients were added to the methods only because of the alchemical understanding of what they would do: for example, a recipe might call for adding the leaves of a plant that was thought to be important for ‘purification’, but which had no chemical role.

In other cases, crucial reactions could be essentially hidden by the alchemical process: the hot extraction method described by Pliny, Dioscorides and the Leyden papyrus called for heating the cinnabar in an earthen vessel, which suggested it would be oxidised. However, the researchers found instead that the cinnabar reacted with the iron in a shell-like container used to hold it within the vessel, forming ferrous sulfide.

On the other hand, the cold extraction method described obtaining mercury by grinding cinnabar and vinegar with a copper mortar and pestle. The researchers determined that copper was a key reagent, and that while it could be replaced by lead or tin – materials for mortars suggested by later alchemical writers – iron would not work.

These crucial reactions could only be determined by attempting to replicate the alchemical recipes, the researchers found – merely reading them was not enough, because the recipes often gave ‘crucial procedural information in apparently minor textual details’.

They also found that some ingredients were favoured because of the alchemical understanding of substances: for instance, ‘oil of natron’ – apparently sodium carbonate decahydrate (natron) dissolved in a liquid like oil or water – was preferred over readily-available quicklime because alchemists held to Aristotle’s assertion that liquids react more quickly than solids.

‘Maybe the idea is not new, but to do it is really challenging,’ Maini says. ‘We needed to have a lot of people working together: philologists to translate the Latin and other ancient languages, historians, chemists, sometimes botanists … it was very interdisciplinary.’

Mercury was widely used in alchemy. It was essential for ‘purifying’ various substances alchemists devised and it was a crucial ingredient for making the Philosopher’s Stone, which was thought to turn common metals into gold.

‘Mercury itself is magic,’ says Tomislav Friščić, a professor of chemistry at Canada’s McGill University who wasn’t involved in the research. ‘Mercury is a liquid metal, so it’s unique, and it also has the ability to mix with other metals [as an amalgam].’

He describes the research by Maini and her colleagues as ‘really brilliant’ and notes that the cold extraction method they studied may be the earliest-known chemical protocol. The recipe appears in a treatise by Theophrastus titled On Stones, which he wrote in the 4th century BC.

‘You can think of [On Stones] as a prototype of an inorganic chemistry textbook,’ Friščić says. ‘It’s really an attempt to take all the knowledge of minerals and materials and metal extraction from the ancient world, and put it into a book.’