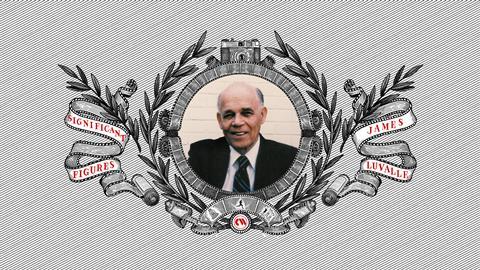 James LuValle, a chemist who broke the colour barrier

Sports or science? There was never really any competition for a Black Olympian who made significant contributions to Kodak’s colour film, as Hayley Bennett discovers

For much of the summer of 1931, James ‘Jimmy’ LuValle lay in a coma at the Los Angeles General Hospital. Penicillin had barely been discovered so all the doctors were giving him to treat his ruptured appendix, stomach infection and gangrene was chlorine water. This inflection point in his life was not just a physical one. LuValle was also at a crossroads in his career.

A promising young track athlete, he had just finished high school at LA Polytechnic and had been offered sports scholarships to two different universities. But in those days, running wasn’t a viable career path and LuValle certainly didn’t consider it one. ‘I never even thought of athletics as a means of making a living,’ he told the UCLA Oral History Program in 1986. ‘Whether I did these things or not depended entirely on whether I thought could do them without interfering with what I thought was important, mainly my academic work.’

Though LuValle could run a lap of the track in under 47 seconds, his heart lay with science. He’d spent his childhood carrying out chemistry experiments on the front porch of his mother’s house in Eastside Los Angeles and devouring science fiction books he’d borrowed from the public library, where he later got a job stacking shelves.

When eventually LuValle left the hospital, his body was weakened by the ordeal, but his mind was set. Realising he wasn’t going to get the education he wanted at either of the universities offering him a sports scholarship, he instead went to enrol at UCLA to major in chemistry. He made a point of staying off the track in his first year whilst he recovered and took a summer job in the chemistry department making up solutions.

In the second year, he got back to his training and by January 1936, LuValle had used up the three years of varsity level sports that were permitted in those days. It was an Olympic year and he had to decide whether he would try to qualify. He spent a few months ‘debating’ the issue with himself, eventually showing up at the Olympic trials in July, at Randalls Island in New York, to run the 400m. Starting in the difficult inside lane, he put in a late burst to snatch third and a place on the boat to Berlin. He was one of 10 black track and field athletes, including Jesse Owens, who qualified that year for the US men’s team – a number that, though small, was higher than for the last five Olympics put together.

I said ‘Do you know that I’m part Negro?’ And then they had to apologise and take the job back

On the boat, LuValle shared a room with race winner, Archie Williams. The two of them gossiped and tucked into pastries, steak and eggs together at breakfast, whilst doing very little training, according to Deborah Draper and Travis Trasher’s book Olympic Pride, American Prejudice. But before disembarking, Ralph Metcalfe, an older athlete now making his second Olympics, gathered the black athletes together for some serious words: ‘We all know where we’re going and what this means,’ he told them. ‘We all know there’s been a lot of talk, a lot of words and rhetoric and vitriol thrown around.’ Just before the trials, the Amateur Athletic Union in the US had voted on whether to boycott the Games over its association with the Nazi’s oppressive regime.

Black athletes were competing in an era of segregation even in their own country. Some sports teams still did not accept black players. What should they expect as they headed for an Olympics that would be opened by Hitler and celebrated only a matter of miles from a concentration camp? LuValle remembered the spectacle of seeing ‘perhaps fifty thousand troops all set to go to war’ as the athletes entered the Maifeld adjacent to the Olympic Stadium, then watching thousands of pigeons being released and listening to a moving rendition of Hallelujah performed by a choir of 5000 Germans. Back at the athlete’s village, there was a warm welcome, an abundance of rich foods and excellent training facilities – it was a real propaganda triumph for the Nazis.

On other matters, LuValle remained quiet, saying that he had an ‘enjoyable time’, while his teammates had only pleasant words for the ‘cordial’ Germans. In two lengthy interviews about his life, LuValle sometimes batted away questions about discrimination directed at his own past, at one point telling the interviewer ‘I’d rather not discuss that one’ when asked whether his skin colour was ever ‘a problem’ at UCLA or when he was growing up. However, he did talk of once losing a job offer after informing his employers of his ethnic background: ‘I said “Do you know that I’m part Negro?” And then they had to apologise and take the job back.’ He was also passionate about race relations issues at universities, calling out ‘ethnic theme houses’ for unnecessarily creating barriers between students of different races.

When LuValle returned from the Olympics, bringing with him a bronze medal, he slipped straight back into university life, completing his master’s degree in chemistry and physics in 1937. Then it was on to Caltech, where he studied for a doctorate under the tutelage of Linus Pauling and became the first African-American ever to earn a PhD from the institution. According to mathematician Edray Goins, ‘his influence on other African-American graduate students at the time was profound. Many who knew him at the time spoke very highly of him.’

Pauling evidently felt he was someone worth investing time in, writing various letters of recommendation for funders and later jobs, despite being himself wrapped up in important work on chemical bonding that would earn him the Nobel Prize. In one, he described LuValle as ‘reliable, industrious and conscientious’. Even after LuValle left, he took time to write him personal letters updating him on progress in the lab.

With Pauling, LuValle worked on the chemical bonding and structures of vinyl ether and oxalyl chloride. However, during his master’s, LuValle had already begun along a path towards a career in photochemistry, completing his thesis on a molecule called crotonaldehyde and, a couple of years later, publishing on its decomposition in light with UCLA photochemist Francis Blacet.

It was in the photographic industry that LuValle found a job in 1941 that would stretch him enough to convince him to stay. (A short stint at Fisk University just prior had left him unimpressed by standards of teaching.) He was a senior research chemist at Eastman Kodak in Rochester, New York – the company’s first black employee – and ended up spending a decade there in total. When he arrived, the research lab was already a bustling $1.9 million a year operation with nearly 400 staff. Initially, he carried out research on the size and distribution of light-sensitive particles suspended in photographic emulsions, which coat the films used in analogue cameras. Later, he worked on colour development and dye formation, making major contributions to colour photographic processes including Kodachrome and Kodacolor, the company’s first colour negative camera film. He received 13 patents at Kodak, though when asked in 1986 whether they were of interest to a lay person he was dismissive, saying they were ‘all extremely technical’.

While it’s true that they were technical, they were certainly not irrelevant. One 1960 patent relates to intensifying the image on a film (including x-ray film) using nitrosodisulfonate ‘latensifier’, a solution applied after exposure and before development. This technique sped up the process by cutting out drying steps required with other chemicals. In the patent, LuValle and his co-worker Gershon Goldberg wrote ‘With this treatment it is possible to reduce the exposure time of patients and x-ray technicians to radiation while still obtaining the same picture. This is very desirable since exposure is dangerous and is a source of increasing concern.’

His time at Kodak was interrupted early on by research for the war effort, first at a government lab and then, after it was blown up (through experimentation), back at Caltech. While it is known he worked on chemical warfare, he never disclosed the details. After returning, he met and married his wife Jean, who worked in production control at Kodak.

In 1953, LuValle left Kodak for good, hopping between New York and Massachusetts and back again to take up senior research positions in different organisations, including at the Fairchild Camera and Instrument Corporation, and then returning to California to work for a company that made typewriters. Some sense of his personality can be gleaned from his papers around this time – in 1972, referring to computer simulations of processes in photocopying machines, he noted: ‘One must always remember that the computer is an idiot. The computer cannot detect errors in the definition and analysis of the problem. It is not a substitute for good rigorous thinking.’

LuValle eventually resumed his academic life at Stanford University in 1975, where he became director of undergraduate chemistry laboratories and helped to establish summer programs for black students. In 1987, six years before his death, he received the Caltech Distinguished Alumni Award, and posthumously, UCLA established the James E. LuValle Fund for Excellence in Chemistry and Biochemistry to support students from underrepresented backgrounds.

LuValle never had the chance to qualify for the Olympics again as, due to the war, the 1940 games were cancelled. He didn’t appear disappointed about this and even kept his sporting background a secret from his children until they were teenagers. ‘Under no circumstances were my kids going to feel any pressure from me to do anything athletically,’ he said in 1988 – and all three of his children went into science and maths. As talented a runner as he was, there was never really any contest for LuValle between the track and the lab. Science came first.