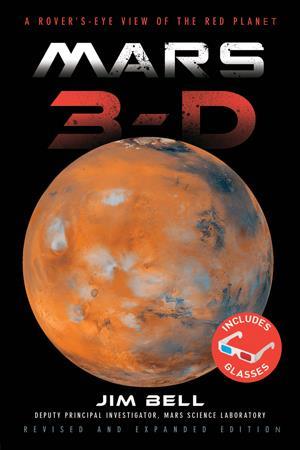 Having previously only had a vague interest in the Mars missions, Nasa investigator Jim Bell’s book certainly got me hooked. While the 3D images seemed gimmicky at first, I was surprised to find out that they were an integral part of the Mars missions, helping to steer the rovers around obstacles and to identify analysis sites.

A large part of the book is dedicated to the 3D  and colour images shot by the three rovers that have been exploring Mars’ surface since 2004. Split into three ‘galleries’, one for each rover, double pages show different surface features and landscapes. In the accompanying text Bell explains why a structure or particular rock was of scientific interest, as well as revealing interesting little snippets like Opportunity’s six-week-long struggle to break free from being stuck in the ‘Purgatory dune’. The complete lack of reference objects makes it difficult to judge distances but Bell consistently indicates the shown structures’ sizes – both in metric and imperial units.

In five introductory chapters Bell describes a typical day in the life of a rover (and of a rover scientist), focuses on the vehicles’ capabilities and surprising longevity, and explains how the missions have changed our understanding of the red planet. Sadly making up only a third of the book, I enjoyed Bell’s writing, which conveys his notable enthusiasm and fascination with exploring an alien planet.