Molecules that amaze us

Paul May and Simon Cotton 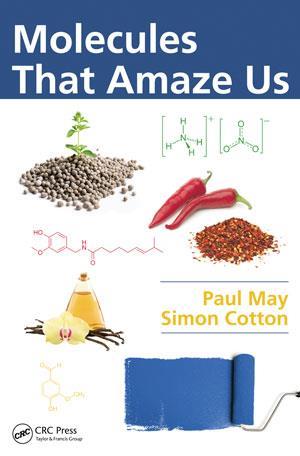 In the mid-1990s researcher Paul May founded the Molecule of the month website. Starting with an article on mauveine, ‘the first industrial organic fine-chemical’, in January 1996, the blog series has been running ever since, and still retains some of its early world wide web flavour today – I’m talking coloured backgrounds and comic sans, with a few broken links. However, the blog article formats varied – a mixture of encyclopaedia-style entries and narrative-driven pieces – an issue addressed in May and Simon Cotton’s book Molecules that amaze us, which is based on the website.

May and Cotton have now collated 67 of the most interesting compounds, dedicating a chapter to each of them. Chapters are presented in an interesting interview style, with questions that range from serious to humourous.

While some chapters discuss well-known compounds such as penicillin or LSD, others chemicals I had never heard of, such as kisspeptin – a hormone inducing puberty – or ebatine, the poison frog compound that once made it into clinical trials as a painkiller, but ended up being too toxic for humans.

The authors strike a good mix in their use of historical content and pop culture references, using famous names to illustrate the compounds’ origin and history. May and Cotton’s enjoyment of modern music is evident – song lyrics are striking and well placed to enhance the narrative around certain molecules. I particularly enjoyed the hilarious images (make sure you don’t miss the flatulent cow in the chapter on methane) that are mixed with the more austere photos and diagrams of chemical structures.

On that point, the chemical structures are significantly less enjoyable than the rest of the book. Though it might be nit-picking for some, the structural drawings kept me seriously distracted while reading. Structures like atorvastatin, featuring a weirdly distorted zigzag chain, certainly don’t satisfy my ideal of beauty and bond angles. I found inconsistencies in bond length and the representation of the methyl group rather cringeworthy.

Chemistry content varies by chapter and readers with little chemistry knowledge might have a hard time following some explanations. Concepts such as enantiomers are only briefly noted, which will certainly make many chemists happy not to read through an introduction to optical activity, but it might make the concept difficult for others to understand. For chemistry-savvy readers, however, the book is an enjoyable, easy-to-digest collection of fascinating molecules to dip in and out of.

Purchase Molecules that amaze us from Amazon.co.uk