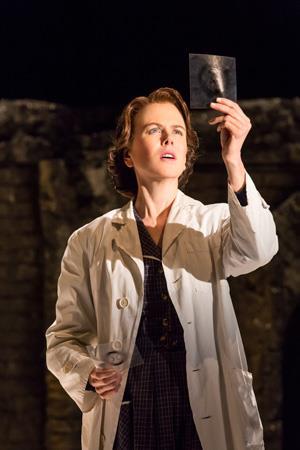 To be fastidious and resolute in scientific inquiry are laudable traits in any modern researcher, but what if they lead to you being marginalised and all but forgotten? It’s an uncomfortable prospect raised in Photograph 51, a new play by Anna Ziegler and starring Nicole Kidman, based on the career of Rosalind Franklin.

Told primarily from the viewpoint of those that directly benefitted from her research, the production focuses on Franklin’s time at King’s College London, where her work on the structure of DNA was conducted, and how one photograph, the titular photograph 51, led to our modern understanding of the nature of life.

This is the tale of a methodical and complicated character who didn’t necessarily get on with her peers, but who had an incredible passion for what she viewed through the microscope. James Watson, Francis Crick and Maurice Wilkins, who would later receive the Nobel prize for their part in the discovery of DNA, act as unreliable narrators in this production. Scenes from Franklin’s career are interspersed with the three scientists discussing why she faded from history and questioning their own, possibly unsavoury, roles in the story.

Ziegler and director Michael Grandage are reticent to tell the audience unequivocally that it was Franklin’s struggle to make headway in a patriarchal society that stopped her from achieving adulation. The nuanced script suggests that the truth, unlike the clarity of Franklin’s x-ray diffraction images, may be rather unclear and it crucially never paints her as a victim.

Kidman portrays Franklin as a dedicated researcher who found nature to be a truly inspiring force and adds a depth of realism I have never really seen in other depictions of eminent scientists. Her supporting cast also produce well-rounded performances – in particular, Patrick Kennedy who plays Franklin’s post-doctoral colleague Don Caspar.

But the on-stage presence of Watson and Crick sits somewhat at odds with the rest of the piece. Both are painted as an almost comedic odd couple who were primarily interested in attention and plaudits. There are also some jarring scenes in which Watson espouses some racist remarks. It seems they’re only included for dramatic irony, given what we know now about his fall from grace, but the words don’t really serve any purpose in the overall narrative.

The narrative is enhanced, however, by Christopher Oram’s wonderful set design. Set in the underground labs underneath the bombed out King’s College quad, the sparse staging is both oppressive and somewhat liberating for the actors, who lift Franklin’s achievement into the public consciousness against a formidable backdrop.

Photograph 51 truly is a wonderful depiction of scientific research and Ziegler’s captivating story ensures that Franklin’s efforts will never be forgotten.

Photograph 51 is being performed at the Noel Coward Theatre in London, UK, until 21 November 2015. Tickets are available from noelcowardtheatre.co.uk.