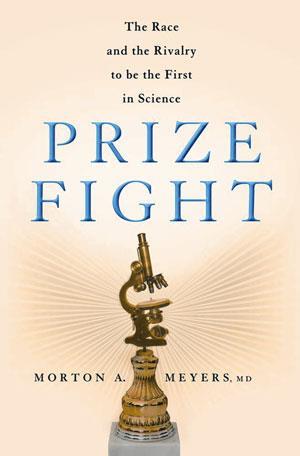 While winners are written into the history books and their names synonymous with success, those in second place are quickly forgotten. This is as true in science as it is in sport. But assigning credit for scientific advances can be a tricky business, whether it is the order of authors on a paper or awarding a Nobel prize.

Meyers starts with several accounts of obvious misbehaviour by scientists aiming for glory, including unrightfully claiming credit or even falsifying data. While some of these cases are rather shocking, they are fairly straightforward and only serve to show the less savoury side of the scientific world.

It is really in the second part that the book gets up to speed. Meyers investigates two high profile cases in medical science, looking at them in depth and showing just how complicated assigning due credit can be.

The first story concerns the discovery of streptomycin by microbiologist Selman Waksman and graduate student Albert Schatz. The second examines the rivalry between magnetic resonance imaging pioneers Raymond Damadian and Paul Lauterbur. In both examples, one party received the Nobel prize while the other was sidelined. Although each case has its own reasons for controversy, there is a running theme of the determined and desperate mindset of a scientist who feels that he is being written out of history.

While the book as a whole is heavily focused on medical research, its stories ring true across all fields. Meyers structures the stories so that the reader will change their opinion throughout the book, showing just how difficult it is to arbitrate on cases like these. As he concludes, awareness of these issues could help to prevent them happening again in the future, but perhaps that’s just wishful thinking.