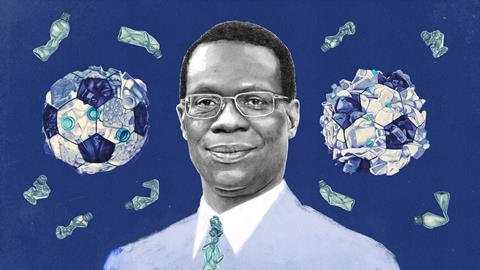 In situ with Robert Mokaya

Robert Mokaya is professor of materials chemistry and pro-vice-chancellor for global engagement at the University of Nottingham, UK, where his group works on the design and synthesis of porous materials for sustainable energy applications. In 2017 he was awarded a Royal Society Wolfson Merit Award and was appointed Officer of the Order of the British Empire (OBE) this year for services to the chemical sciences. He was speaking to Victoria Atkinson.

I was always curious, as far back as I can remember. I always wanted to find out why things happened the way they did, and I had lots of questions. Many of them remained unanswered!

I spent a year working for Unilever. And I’m glad I did, because it absolutely showed me that I didn’t want to work in that environment. So I spent that year trying to figure out what I was going to do and how I was going to get back to academia and research.

I was wandering around the University of Nairobi after I graduated and I saw this advert saying that you could apply for a scholarship to study at Cambridge. I have this policy where I say ‘If it’s going to be just one person who gets it, why can’t that person be me?’ The best way of making sure nothing happens is if you do nothing. But if you do something, something might happen. So I went and put in that application and something happened. I got the scholarship!

I’ve not always had role models who I can model myself on. Who I can look at and say ‘Ah, that person is like me, I am going to be like that person’. In a strange way, it was not something that I battled with, and I’ve had people who have supported me enormously, both in Kenya and in the UK. But actually, it’s only lately that I have realised that my journey could have been very different if I’d had those role models.

As scientists we are not above or below, we are within society. Sometimes we encounter some of the challenges that everybody meets in society, and racism is one of those challenges. We’ve held on too much to systems that we should challenge. Those systems in themselves are not bad, but they can contribute to forming barriers to some people. We have to keep on evolving and changing. If we don’t, then actually we are going backwards.

Chemistry is only a small part of who I am. I do zillions of other things. I know people who don’t even know I’m a chemist! I like to immerse myself in charity work, whatever form that takes. But I also like to do a little bit of sport – I have been known to be found wandering around the streets where I live, pretending to be jogging.

I like making things. And not just in my research as a materials chemist. I like taking a useless thing and turning it into a useful thing. I used to make footballs out of waste plastic when I was little, because nobody would buy me one. All of my friends, we used to get pieces of plastic waste and put it together and tie a string around it. It actually bounced, even if it was a little bit heavy!

The thing that I am proudest of is my family. My wife and my two children. I have grown with them. The day that I want to be 20 metres tall is Father’s Day. I celebrate the achievements of my children 20 times more than I even know how to celebrate my own achievements!

When I come home after a difficult day I will sit down, and although I don’t watch much TV, I will find a programme, particularly natural history, or programmes about nature with David Attenborough. It tells me that there’s a world out there, and chemistry becomes less important.

In my career, I have been lucky to open a lot of doors. If there’s any way I can ensure that all those doors are still open and people are coming through them by the time I stop doing what I’m doing here, that will be a big achievement for me.