Spectrometry for the masses

Mass spectrometers are speeding up and shrinking. Elisabeth Jeffries looks at what’s on the market 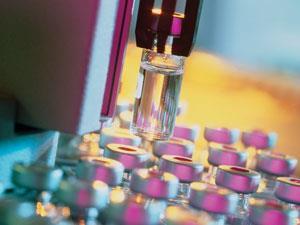 A technique that has sliced weeks out of scientists’ schedules over the last 40 years, mass spectrometry (MS) continues to move forward, shaping new scientific fields in the process. Among the fields that continue to benefit from improvements in MS are drug discovery, neonatal screening, food analysis, biotechnology and air quality control.

A mass spectrometer can be used to describe unknown and quantify known compounds and obtain information about chemical structure. It ionises chemical compounds to generate charged molecules or molecular fragments and allows the measurement of the molecular mass of a sample. Ions in the samples, which may be solid, liquid or gas, are detected and separated according to their mass-to-charge ratio and then processed according to their relative abundance. Ions are used because they are easier to manipulate and detect than neutral molecules. The ions are then identified by comparing observed masses to known masses or through their typical fragmentation pattern.

The technique transformed chemists’ lives from the 1960s onwards. ‘Organic chemistry took off 30–40 years ago partly because of this new analytical tool,’ points out Andy McNally, a synthetic chemist at the University of Cambridge, UK. Previously, tests usually required the use of volatile materials, and compounds had to be isolated and compared using melting point and crystallography techniques. ‘Now, a scientist in a pharmaceutical company, for instance, can take hundreds of structures and know almost instantly what they are,’ says McNally.

Frequently used with gas chromatography (GC) or liquid chromatography (LC) techniques that separate compounds, MS usually consists of three main sections: the ionisation source, analyser and detector. Separated ions are detected, feeding signals into a data system where these m/z ratios are stored, together with their relative abundance, for presentation in the format of a mass-to-charge ratio spectrum. The three MS parts are usually all kept in a high vacuum to give ions a good chance of travelling from one end of the instrument to the other without any obstruction from air molecules.  Tandem mass spectrometry (MS/MS) adds a second round of ion selection after a fragmentation step to get structural data.  Modern mass spectrometers now use software to control and monitor the procedure.

Greater computerisation is, indeed, a growing feature of today’s MS, alongside portability, miniaturisation and speed.  The ideal outcome could perhaps be described as an ‘idiot-proof’ tool that will be applied in many environments by many types of scientists. ‘It used to be a huge machine that could catch fire more easily than now. Nowadays, the hardware is more robust generally and machines are now more accessible to scientists with less training. Graduate students can now collect the data without worrying too much about the technology,’ explains Andrew Tyler, field technical sales leader for manufacturer PerkinElmer.

‘Laboratories are pressured to produce ever more data with fewer human resources, therefore requiring automated solutions to complex sample preparation and analysis challenges,’ Tyler says. Considering these challenges from an instrument manufacturer’s perspective, he says the company’s vision is ‘to produce a range of mass spectrometers that can be used with limited technical training, with applications software tailored to the needs of individual laboratory functions’. 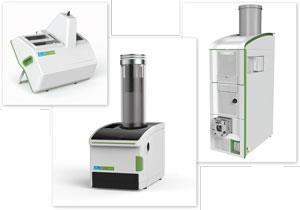 Manufacturers are located in many countries, with the largest based in the US: Agilent Technologies, formerly part of computer company Hewlett-Packard. Practicality, affordability, speed and reliability are among the main qualities they emphasise. Like many of its competitors, PerkinElmer produces a range of tools for different applications, combining MS with GC and LC. Its most recent product, the AxION iQT GC-MS/MS, aims to improve speed, precision and convenience for scientists.

Tyler describes it as ‘a one-of-a-kind technology that generates accurate mass full scan data, facilitating both compound ID and quantitation on a single instrument – easier, faster and with greater accuracy than traditional MS/MS systems’. By comparison, he indicates many rival producers offer specific instruments for compound characterisation, and others for quantitation. Its design means product components may be mailed to users in cases of technical problems.

‘Many designs function very well when analysis is restricted to a targeted list of known compounds, but they are challenged when it comes to samples containing components with unknown structures,’ he says. ‘Our novel design overcomes these challenges, and this is an important development, because modern GC-MS applications in areas like drug abuse, environmental, food safety analysis and the petrochemical industry all require an ability to identify previously unknown components at the trace level.’

For more convenience, modularity is emphasised in another product, the AxION 2 time-of-flight (TOF) mass spectrometer. This uses an electric field to accelerate ions through the same potential and then monitors how long they take to reach the detector. If the particles have the same charge, their kinetic energy is the same, so their speed depends only on their mass: lighter ions reach the detector first.

PerkinElmer’s mass spectrometer can interface with both HPLC and UHPLC (high performance and ultra high performance LC respectively) meaning high resolution and sensitivity and fast analysis. It can also switch between a chromatographic approach and direct sample analysis ionisation in only a few minutes. This is because not all applications require LC.

‘In the past, it would have taken half a day to change from one to the other,’ Tyler says. He describes AxION direct sample analysis, which can be used in place of the LC components, as a ‘breakthrough technology’ that can eliminate many sample preparation steps required by conventional approaches before performing sample analysis. 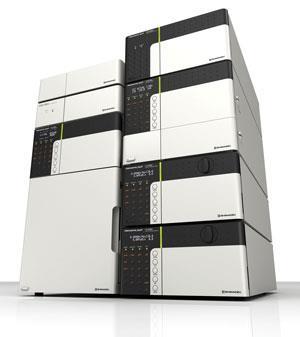 Japanese producer Shimadzu emphasises speed in many of its products. ‘The Nexera UHPLC system is the fastest LC system in its class. It has the highest pressure rating and flow rate and the fastest auto sampler. It has the lowest carryover and one of the smallest delay volumes in its class. All of these are very important to the ultimate speed and sensitivity of our customers’ methods,’ claims Dave Houlker, the company’s UK technical manager.

Houlker says that the company’s newest matrix assisted laser desorption ionisation (MALDI) spectrometer, the MALDI-7090?TOF-TOF, ‘also has a high speed, high throughput autosampler which, coupled with the highest resolution in its class and true high-energy collision induced dissociation [CID] also provides the maximum information per sample’. In CID, molecules are crashed into helium or argon atoms at high energy to fragment them.

One of the challenges is to increase the speed of processing without compromising the quality of sample or sensitivity of detection, and to extract more information out of increasingly complex, tiny samples. Houlker highlights this quality in his description of the company’s LCMS-2020 instrument: ‘Unlike competitive instruments, the LCMS-2020 maintains isotopic integrity when scanning at 15,000 daltons per second and also maintains sensitivity at high masses.’

The MALDI-7090 TOF-TOF is constructed for reliability combined with sophisticated features, which may be particularly useful for research in university laboratories. ‘A huge amount of thought has gone into system reliability. The source uses wide-bore ion optics to provide long term reliability. By designing in source cleanliness through wide-bore optics, source cleaning is reduced even for the most demanding high throughput applications. Should the source become dirty, Shimadzu’s TrueClean UV laser source cleaning technology ensures rapid and effective return to normal use,’ says Houlker. He says this instrument also benefits from high-definition viewing optics, providing a ‘superb image’ of the sample surface, owing to software-controlled variable focus and high resolution sample viewing.

Producers also emphasise service. For instance, while PerkinElmer mails replacement parts to customers, Shimadzu highlights useful software: ‘Outstanding hardware is nothing without the simplicity and power provided by outstanding software. Shimadzu has a unique piece of software in its Open Solution add-on “ToolBox”. This provides automated column and pH screening prior to mass or UV-directed purification steps,’ explains Houlker.

Two trends in MS are noticeable. One is the popularisation of the technique so that it is more user-friendly. The other is sophistication, opening up new research. Most manufacturers are engaged in both. Microsaic is perhaps unusual, aiming for miniaturisation and portability. Listed on the Alternative Investment Market (AIM) at the London Stock Exchange, the company owes its innovation to semiconductor technology. 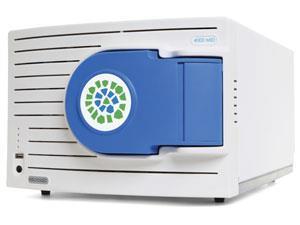 ‘Semiconductor processor techniques precisely define the critical parameters that demonstrate the performance of the MS by etching procedures onto a microchip. Previous MS technology uses conventional machine tooling techniques whereas we use semiconductors,’ explains Richard Moseley
commercial manager at Microsaic.

Moseley says that the company’s latest product, the Microsaic 4000 MiD, launched in March 2013, is the world’s smallest MS system. ‘Computers went from 1970s mainframes to the 1990s PC. We’re doing the same for MS – personalising it and allowing chemists to benefit from the power of MS at their fingertips,’ says Moseley. Nevertheless, it was demand from big pharmaceutical companies that drove the development of the product: ‘Pharmaceutical customers wanted single quadrupole MS to hook up to all HPLCs,’ explains Moseley. The single quadrupole MS is a mass filter for ions and is smaller than triple quadrupole MS systems. The outcome is a PC-sized MS that can be used outdoors as well as in laboratories.

View from the bench

A number of biochemistry fields, such as proteomics, have benefitted particularly from advances in MS, because it breaks up the molecules into peptides, as McNally points out: ‘MS is now routinely used in the analysis of large protein molecules. It relies on the fragmentation of bits of protein, helping to identify the protein and its role. MS has enabled protein analysis to go into phenomenal directions in the last 20 years.’

Shabaz Mohammed, a proteomics expert and senior research fellow at Oxford University’s departments of chemistry and biochemistry, confirms the significant role MS plays in the field: ‘Mass spectrometry may not necessarily be the most sensitive right now but it provides an unparalleled level of specificity and reproducibility,’ he states.

Sensitivity has improved by over a millionfold

Mohammed suggests disease biomarker detection (an indicator of a biological state or past or present existence of a particular type of organism) is one of the most recent functions for which MS is being considered.  ‘There is now a building body of work that suggests that MS can detect proteins related to a specific disease at levels matching existing biochemistry assays that use solid phase enzymes. Although the upfront costs of MS systems are higher, there is a major saving in reagent consumption,’ he points out.

‘MS is the only technology out there that can sequence and quantify peptides to any meaningful degree. In the time I have been performing mass spectrometry orientated proteomics I have observed mass spectrometers improve in every conceivable way. Importantly, sensitivity has improved by over a millionfold and speed of data acquisition has increased by over a hundredfold,’ comments Mohammed. He points out that the technology has also become more versatile, opening up new areas of research: ‘The options for the actual sequencing of peptides have increased from one CID to several, which allows a far larger range of peptide compositions to be analysed,’ he says.

Nevertheless, Mohammed considers that MS tools could still improve in terms of robustness, cleaner software and better instrument control. Technically, new challenges are still emerging. ‘Improvements in sensitivity are always welcome but the main stumbling blocks to comprehensive sample analysis are now a combination of speed and dynamic range,’ he says.

‘Developments in sample ionisation and the subsequent ion manipulation are required. Much work is still needed although current generation systems now provide an exquisite level of performance that provide deep insights into proteomes,’ says Mohammed.

Elisabeth Jeffries is a science writer based in London, UK