The history of chemistry: a very short introduction 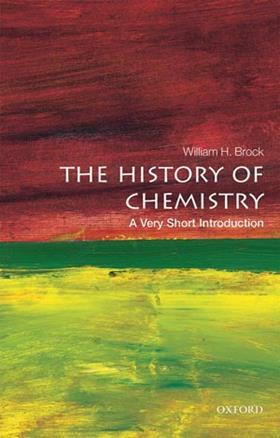 For some, recent history is more interesting and relatable than ancient history, which is why I enjoyed the last chapter of The history of chemistry: a very short introduction. Entitled ‘Synthesis’, it covers the last century when chemical analysis developed apace and industry delivered wonderful polymers. It also dealt us some terrible blows in the form of chemical weapons and spills. But then, every subject’s history has a darker side.

There are now more than 400 books in Oxford University Press’s Very short introduction series, seven of which are about chemistry. William Brock’s book is a worthy addition to this list.

Brock opens his account with a discussion ‘On the nature of stuff’, detailing how the ancient Egyptians and Romans developed various chemistry-based products from pigments and dyes to glasses and ceramics. This is followed by ‘The analysis of stuff’ and the medieval period of alchemy. Chemistry only slowly emerged in the 1700s – thanks in no small part to the discovery of gases and Antoine Lavoisier’s intellect – and came of age in the 1800s when the great Justus von Liebig confidently declared: ‘Alles ist Chemie’, everything is chemistry.

In a history book as short as this one, some things have to be left out or glossed over. One of these is the issue as to who first proposed the cyclical nature of benzene. Its chemical formula, C6H6, puzzled chemists back in the 1860s. Eventually the German chemist August Kekulé received the credit for suggesting it must be cyclic.

He alleged its molecular structure came to him as he was dozing on a London bus in 1855. He didn’t publish this momentous concept till 1865, and his claim went unchallenged until Alfred Bader disputed it this century.

Bader argued that Kekulé was already aware of the cyclic structure of benzene because it had been illustrated as such in the 1861 book Chemische Studien by Josef Loschmidt.

I suspect there may be other historical mysteries of chemistry still to be solved, but meanwhile I can thoroughly recommend this brief tour of our all-embracing science.