The matter factory: a history of the chemistry laboratory 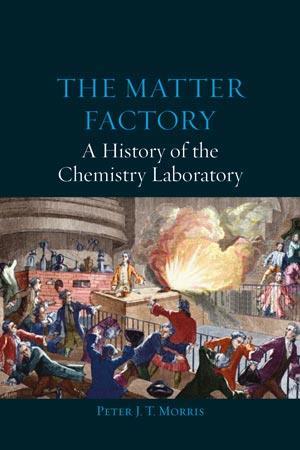 As befits the place where chemistry is carried out, the chemical laboratory represents everyone’s idea of a proper lab space – people in white coats perform experiments, surrounded by racks of reagent bottles and mysterious bubbling flasks. For professional chemists too, it holds importance as the place where we trained and go on to spend the bulk of our careers. But, surprisingly, there has been no comprehensive history of the chemistry laboratory, an omission put right in The matter factory by the distinguished historian, Peter Morris.

In this book, Morris traces the development of the chemistry laboratory from its earliest origins in the 1590s to the present day. The first laboratories emerged from the era of alchemy and did not differ much from artisans’ workshops. They typically contained a furnace and a water bath, as well as a few of those distinctive distillation vessels called alembics.

From this simple beginning, Morris traces the development of the chemistry lab through some of the great names of chemistry, such as Lavoisier, Liebig and Bunsen. Morris does not solely focus his attention on academic laboratories however, and includes a chapter on the Government Chemist’s Laboratory in London. This was designed in the 1890s by the first ‘government chemist’, Thomas Thorpe, later knighted as Sir Edward Thorpe, who was strongly influenced by the design of academic laboratories.

Morris brings us up to date by describing the introduction of the lab coat and modern instrumentation as the 20th century advanced. Finally, he brings us to contemporary developments. Using the Chemical Research Laboratory at Oxford University as his example, Morris describes the construction of a modern research lab where the emphasis is on flexibility, so that individual laboratory units can be allocated to different groups according to need. The design of these units is unconventional too; with less open benches and more fume cupboard space than a traditional laboratory.

The matter factory succeeds in describing the evolution of the chemistry laboratory. It is highly readable and well-illustrated, including numerous references. As such, it should be widely read by all who have had the privilege of studying and working in a chemistry laboratory.

Philip Ball discusses some of the issues raised in The matter factory in this month’s Crucible column.

Purchase The matter factory: a history of the chemical laboratory from Amazon.co.uk