A coat of many colours 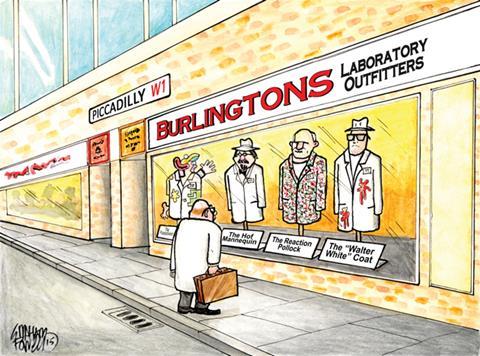 As every school child knows, scientists are men in white coats. Gender issues aside, this stereotyping is arguably less disturbing than it might seem – for don’t all professions, in the eyes of children, require a uniform like that of the firefighter and police officer? And chemists should be less alarmed than most other scientists, because they are far more likely to be found actually white-coated than the physicist (who sits contemplating the universe in tweeds, right?) or the geologist (chipping away with her hammer in hiking gear).

But the image of a white-clad chemist gazing at coloured liquid held aloft (a pose inherited from urine-inspecting medieval physicians) is relatively recent. Those pictures arose in the utopian optimism of the mid-war era, when chemistry was promising to supply the synthetic materials and medicines of the future. In the numerous laboratory scenes that adorn Peter Morris’s splendid new book The matter factory, the researchers are, until at least the first world war, almost always dressed in the everyday fashions of gentlemen (and occasionally gentlewomen) of their respective eras.

You might wonder at the formality of it all: why risk soiling your best clothes at the bench when you could work in the plain shirts, aprons and rolled-up sleeves of the craftsman? But scientists had a social stature to look after, and students to impress. Indeed, society (at least, English society) expected its scientists to look suitably grave and decorous. When Ernest Rutherford posed for Nature’s photographer in his lab at McGill University, Canada, in 1906, the photographer was concerned that Rutherford wasn’t wearing cuffs. So he was forced to borrow those of his young research student Otto Hahn – who, as a German, was au fait with the laboratory dress code of polite Europeans.

These associations of class, status and authority imply that adopting the white coat required greater justification than the merely practical consideration of avoiding stains and burns on one’s best jacket. To change appearance was to change the image of the profession. As Morris says, historians have given curiously little attention to this sartorial shift; and those that have assumed that the chemist just copied the trend set by physicians, for whom the white garments had become an emblem of sanitary practice.

The use of protective aprons goes back a long way – the alchemist’s assistant in Pieter Brueghel’s famous engraving from the mid-16th century is wearing one. But it is precisely this item that marks him out as an assistant: this kind of gear was for the ‘rude mechanicals’, not for the philosopher. Assistants in the labs of Michael Faraday and Justus Liebig are shown similarly attired 300 years later, but not the distinguished scientists themselves. Wilhelm Hofmann was photographed wearing a long, lightly coloured coat as he leant casually on a lab bench in Berlin in 1870, but Morris believes that he had just wandered in wearing his hat and summer raincoat.

Morris speculates that the lab coat might as much have migrated upwards from the factory floor as it moved sideways from the medical fraternity. A photo of workers in the Bayer industrial lab in the 1890s shows them in long, darkly coloured protective coats like those that carpenters and painters would wear. By the early 1920s these coats are mostly white on workers photographed in the BASF lab in Ludwigshafen. But Morris agrees that for the practice to reach chemistry students and academics, the imprimatur of the socially respectable physician might have been necessary. Whatever the case, by the 1930s they were common, and by the 1950s virtually mandatory.

White isn’t an obvious choice of course· it shows stains all the more clearly. But I suspect that became part of the attraction. I could remember the provenance of many of the colourful marks on my old coat worn at Oxford, and when it somehow vanished into the jumble sale of the past I felt that I had lost a part of my short and undistinguished laboratory history with it. I became a physicist, and a theoretical one at that, and no longer needed protection against acids or manganese salts.

The irony is that today a photographer – who would be surprised to see suits in the lab and positively amazed by removable cuffs – is more likely to request that a chemist put on a white coat over the casual gear generally seen in the lab (or as often as not, the computer room). For how else will we know  that we’re looking at a chemist?

Did you enjoy this article? Take our survey and give us your feedback: Click here to start