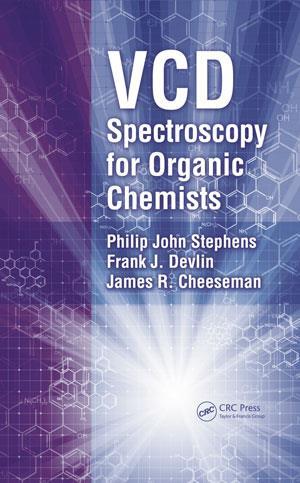 Much of our world is chiral, and certainly key molecules in biological systems are chiral –  their mirror images not being superimposable on the original. It is challenging to determine which of two enantiomers is present in a sample, especially when there is no similar compound to act as a reference.

Circular dichroism – the difference in a sample’s absorbance of left and right circularly polarised light – has been used since the 1960s to identify the handedness of steroids, tris-chelate metal complexes and other small molecules (the signals having one sign for one chiral molecule and an equal and opposite signal for its enantiomer). Yet circular dichroism is in no sense ‘universal’, as it requires both accessible electronic transitions and an understanding of the mechanism that gives rise to the observed signal.

Vibrational circular dichroism (VCD), by contrast, has the potential to be a universal technique since all molecules have vibrations, and chiral molecules vibrate in a manner that produces helical shapes. It is now feasible to calculate the VCD spectrum for pretty much any small molecule.

VCD spectroscopy for organic chemists sets out to instruct the reader in VCD and show how spectra can be measured and calculated for a proposed molecular geometry. It is an extremely well-written book that achieves the authors’ goal of being a comprehensive textbook.

Despite being challenged by the number of acronyms one needed to master to read the introduction, the early chapters contain a lovely outline of what is experimentally possible with small molecules and how to achieve it. A useful discussion of the role of conformation is given (chapter 5), as is how to integrate theory and experiment for conformationally rigid molecules (chapter 6). Once the putative organic chemist has mastered the measuring of samples, probably the most useful part of the book is the wonderful catalogue of spectra given in chapter 7.

However, do not let the title deceive you into thinking the book contains no equations or theory. Whether the target audience of organic chemists will appreciate the chapters on theory and ab initio methods remains to be seen but these sections are well written and rigorous, presented as an essential complement to analysing good quality data.

It is disappointing to me that there is no mention of the challenges of measuring protein spectra in aqueous solution, but then the book never promises that. Also, greyscale figures where lines cannot be distinguished, with a colour version in an inserted section does seem to be a peculiar production method.

However, those points aside, I highly recommend VCD spectroscopy for organic chemists as the textbook of choice on this useful topic. ?