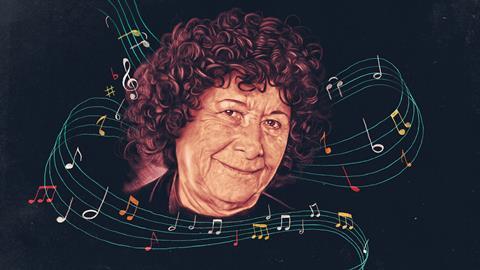 In situ with Zafra Lerman

Zafra Lerman is president of the Malta Conferences Foundation, which brings together scientists from across the Middle East to foster collaboration and promote peace in the region. As well as her work in science diplomacy, she has won many international awards for her innovative methods for teaching science through the arts.

I knew I’d be a scientist from the age of two. Nobody could answer any of my questions. I‘d pose in the mirror and ask, ‘What am I doing there?’ I didn’t know the word scientist, but I knew that I would like to know more about things like that.

I researched secondary isotope effects. One of my discoveries on a temperature dependence of secondary isotope effects started other people working on it. But the world started getting more and more complicated and I thought I could do more good by teaching minorities that would never take science, teaching non-science majors so they would be able to understand scientific articles that appeared in the daily newspaper.

Mike Alexandroff had a vision for a university that would have open admission, so that people in difficult economic situations could have higher education. When he took over Columbia College in Chicago in the 1960s they did not have any science because the people there were very progressive. They said science caused all the problems, why should we teach such a horrible subject? But he wanted somebody that is a good scientist, a good teacher, involved in disarmament and arms control and human rights. My name came up everywhere, and he gave me a completely free hand to do what I wanted, how I wanted.

A lot depends on the teacher you have, therefore I taught chemistry in a completely different way. I used art, music, dance, drama, poetry, animation, anything. One group of theatre students did a play to show their knowledge on chemical bonding. They took Romeo and Juliet and changed everything to sodium and chlorine. Years later I went to a real Shakespeare play and the actor said something with the intonation that in my head sounded like ‘I am sodium’. I went backstage and it was the same student. He said to me, ‘I forgot everything I studied long ago, but the periodic table and the ionic bond I cannot get out of my head because I acted it and I understood it so well’.

It was funny when [former US vice-president] Al Gore produced his video on the environment [An Inconvenient Truth] and he got for that an Oscar and a Nobel peace prize. My students got very angry: ‘Look at our videos that were superior to his! Communicating exactly the same subject! Nobody gave us an Oscar.’ And they did it years before he did it.

I taught homeless kids at night in a dance studio. One year the organisers of the Gordon conference on science visualisation asked me, can you bring 20 of these kids to show us how they understand. And they came and they presented the chemical bond through dance, the depletion of the ozone layers through dance, and the audience all stood up and shouted ‘Bravo, Bravo!’ The audience sadly was lily white and these kids were all African American.

I was telling the kids for a very long time that they are going to spend five days with distinguished scientists, and they will stay together, they will eat with them and interact with them. What I neglected to say is that Gordon conferences are in crammed dormitories. In their mind, they were going to a five star hotel. When they arrived, somebody called me and said ‘there is a mutiny here’. So I came and I said ‘what happened?’ And they said, ‘you said that we will stay with the scientists. Those are dirty dormitories. Why are we not with the scientists?’ So I said to them ‘yes the scientists will be in the rooms next to you. All of them stay here. You can learn from that – the type of the hotel is not important to these scientists, to them it is more important what they do for the world.’ But the dormitories really were bad. It was 100°F at night and there was no air conditioning.

Then I said to the kids there’s a room where there are soft drinks and snacks. Go there, and you will be able to interact with all these scientists as I promised you. So they went, and when I came in later I was very puzzled, because there were at least three scientists around every one of these kids, pouring coke for them. I said this is really weird. Something happened here. So I said to the kids ‘Oh, I see that the scientists are so nice to you’. They said ‘yes – when we came they saw 20-something African American teenagers and they said we didn’t belong here. We said the password, we said “Zafra”’. I told the scientists you just learned that you cannot judge anybody by the colour of their skin.

It was a very good experience both for the scientists and the students. The kids were homeless, but a huge number of them went to university and two continued to a PhD. So this is what chemistry did! But it was taught the way they could understand it.

September 11 happened and I told my subcommittee I think we should concentrate now on the Middle East. Then, at the meeting in 2002, the ACS said we would like to get a big idea from outside the box. I suggested that we organise a conference where we bring scientists from all over the Middle East, they will all stay in the same hotel and eat together, they will not be separated for five days. I said I will bring six Nobel laureates. The Cubans said they thought a bomb fell in the room when I said that. You could hear people breathing – it was such a shock. But the ACS really supported it from the beginning, and we scheduled the first Malta conference for December 2003.

In my subcommittee was Stanley Langer, he worked in the RSC international office. He immediately said, I think we have to involve the RSC, and in the end he persuaded them to be co-sponsors. So then we approached the executive director of the German Chemical Society, and they joined, and we approached IUPAC and IUPAC joined. UNESCO from the beginning was a big sponsor and supporter too.

We had our first Malta conference during the intifada. Always our purpose was to get as much peace and stability in the Middle East because this will help to solve the Israeli–Palestinian conflict. The board asked me, why Malta? And I said it’s so complicated to get there that it would not be worthwhile for terrorists to come. I have to admit we had security throughout the first conference, but only I and the organiser knew that.

My intention was to have one conference to prove that mission impossible can be mission possible. And I proved it. At the end people were crying, hugging, kissing each other, it looked like a family reunion. The participants said, ‘we want to continue, we formed collaborations, we formed friendships’. So we took a vote and they unanimously voted to have a second one.

In December we were supposed to have Malta X, with a huge celebration for the anniversary. But Malta has very strict Covid regulations. People from countries on Malta’s dark red list cannot even dream of entering. Five of our countries were dark red. Then Malta approves only the Pfizer, Moderna, AstraZeneca and J&J vaccines. Countries that had the other vaccines could not enter. So 50 people out of 100 could not attend. We had to make the horrible decision to postpone at the last minute. The people were devastated. But it’s not a conference you can do virtual, and it’s not a conference you can do hybrid. The conference needs the interaction.

My husband and I always had season tickets to the opera, to the symphony, to the ballet and to the theatre. Now, because my husband passed away, I take with me students or former students because I don’t like to go anywhere alone.

I still work on human rights too. Still the education continues, still working on peace. Still trying to make the planet a better place for humankind.