A clash of symbols

Two centuries ago, a Swedish chemist developed a system of symbols that formed the basis of the modern language of chemistry. Mike Sutton finds out more

Two centuries ago, a Swedish chemist developed a system of symbols that formed the basis of the modern language of chemistry. Mike Sutton finds out more

1808 was not a happy year for Sweden. Its unfortunate events included a Russian invasion, heavy military defeats and substantial territorial losses. Many blamed this humiliation on the incompetence of King Gustav IV, and disgruntled army officers deposed him early in 1809. Yet amid the troubles of 1808, a young Swedish professor began a project which was to have a huge impact on the scientific world. While Sweden’s Baltic empire crumbled, J?ns Jacob Berzelius started building a new empire of the mind, ruled from his laboratory in Stockholm. He dominated European chemistry for decades, until eventually his authority - like King Gustav’s - was challenged by impatient young men. But although new discoveries led chemists to modify or abandon many of his theories, his system of chemical symbols survived, and it remains the basis of chemical nomenclature today. 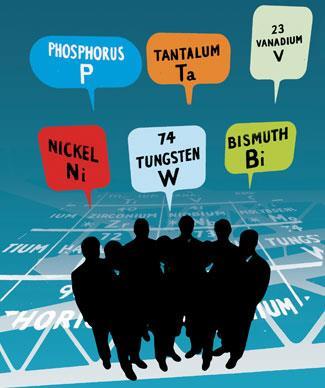 Berzelius was born on 20 August 1779. His father, a provincial schoolmaster, died when the boy was four years old. A few years later his mother also died, after which he was brought up by relatives. He attended high school and university intermittently, taking various jobs to fund his studies. A scholarship enabled him to complete his doctorate at Uppsala in 1802, but he continued to struggle financially. As municipal physician to the poor of Stockholm he earned little, and a failed business partnership (for marketing mineral water) left him in debt. However, his prospects improved in 1807, when he became Professor of Medicine and Pharmacy at Stockholm’s School of Surgery (where he had previously worked as an unpaid assistant). 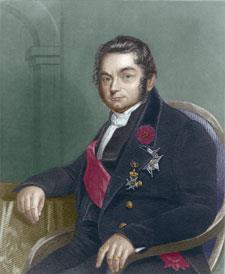 Since no satisfactory Swedish chemistry textbook was available for his students, Berzelius set about writing one. The first volume of his L?rbok i Kemien   appeared in the fateful year of 1808. Later volumes (and revised editions) followed, and were translated into other languages, becoming essential reading for aspiring chemists everywhere. But writing this introductory work seems to have been an educational experience for Berzelius himself, convincing him that chemistry was in a state of confusion which required clarification. In particular, he felt the need for a more helpful method of naming and classifying chemical substances - perhaps resembling the biological system developed by his fellow countryman Linneaus (Carl von Linn?, 1707-78).Despite the limited resources at his disposal, Berzelius was well suited to the task. He had come to science at a time of revolutionary change, and while his older contemporaries had much to unlearn, he started with a clean slate.

When Berzelius and his step-brother began teaching themselves chemistry in the 1790s, they used a German textbook which accepted Antoine Lavoisier’s new oxygen theory of combustion. Berzelius prepared oxygen in his lodgings at Uppsala, and entertained his fellow-students by burning iron wire in it, while the university still taught the outdated phlogiston theory. (Sweden’s Academy of Science rejected one of Berzelius’ earliest research papers because it used anti-phlogistic terminology.) But while his seniors were catching up with the last revolution in chemistry, Berzelius was already exploring new frontiers.

In 1800 Alessandro Volta announced the invention of his electric battery (the ’voltaic pile’), sounding what Humphry Davy described as ’an alarm-bell to experimenters in every part of Europe’. One of those it alerted was Berzelius, who began investigating the medical uses of electricity while a student at Uppsala. After moving to Stockholm, he lodged with Wilhelm Hisinger - a mine-owner, mineralogist and chemical experimenter who had access to Sweden’s largest voltaic pile. Together they performed electrochemical decompositions, and from 1803 they published papers foreshadowing some of Davy’s later achievements. Berzelius soon recognised that electricity would have to feature in any future account of chemical reactions, but the pathway towards a satisfactory theory was still unclear.

One avenue had already been explored by Jeremias Richter, a German scholar who attempted to derive general laws of chemical combination from quantitative studies of specific reactions. Berzelius mistrusted Richter’s calculations, but felt his ideas deserved further consideration. However, the chemical statistics on which any such general laws must be based remained a subject of controversy. While Claude Berthollet asserted that elements combined with each other in continuously variable proportions, Louis Proust maintained that they always did so in fixed ratios. For some time, analytical techniques were not precise enough to settle the issue - indeed, one of the challenges which Berzelius set himself was to determine the exact proportions by weight of the constituent elements in as many compounds as possible. In Britain, John Dalton was undertaking a similar task.

In 1808, Berzelius heard about Dalton’s new chemical atomic theory. Like Richter, Dalton was interested in chemical statistics. But while Richter’s work had made little impact, Berzelius declared that Dalton’s theory - if it proved correct - would be the greatest advance yet made in chemistry. The Berthollet- Proust controversy had highlighted the fact that some pairs of elements can combine to form two or more compounds. A quantitative study of such compounds led Dalton to his ’law of multiple proportions’, stating that whenever two elements combine to form more than one compound, the different weights of one element which combined with a fixed weight of the other are in a simple numerical proportion (often 1:1, 2:1 or 3:1). 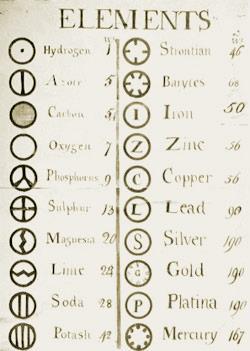 Dalton was already convinced - by physical rather than chemical evidence -that matter was composed of atoms. Now, through the law of multiple proportions, he applied the atomic theory to chemistry. He inferred from the law that atoms of each chemical element had a distinctive weight and that when atoms of one element combined with those of another they did so in fixed numbers with simple ratios. However, Dalton could not determine the actual numbers of combining atoms from these ratios. He therefore assumed that these numbers were the simplest ones possible (unless there were indications to the contrary). On that basis, he proposed that the basic unit of water consisted of one atom of hydrogen plus one of oxygen. This led him, and others, to assign oxygen an atomic weight that was half the true value - an error finally laid to rest half a century later, thanks to Amadeo Avogadro and Stanislao Cannizzaro.

In his publications, Dalton used graphic symbols to represent the atoms, arranging them in patterns to illustrate his ideas about their spatial relationships in compounds. But while chemists generally welcomed Dalton’s law of multiple proportions, many had reservations about his atomic theory -and his symbols. Berzelius’ initial scepticism about the atomic theory was based on his electrochemical experience. In that crucial year of 1808, he learned that Davy had electrolysed molten soda and potash, yielding the previously unknown metals potassium and sodium. Repeating Davy’s experiments, and performing further ones of his own, convinced him that chemical compounds were held together by electrical attraction between oppositely charged components. However, this conclusion led him to regard Dalton’s ’atomic hypothesis’ as being ’attended with great difficulties’.

Berzelius thought that if chemical combination resulted from the attraction between positive and negative atoms, then two-element compounds should be of the type A + B, A + 2B, A + 3B etc. He envisaged a fixed number of similarly charged B atoms distributed around a single oppositely-charged A atom, with the mutual repulsion between the B atoms keeping them as far apart as possible. However, quantitative analysis appeared to show that some compounds had atomic compositions of the 2A + 3B or 3A + 4B type - structures which he thought must be rendered unstable by the mutual repulsion of similarly charged atoms. 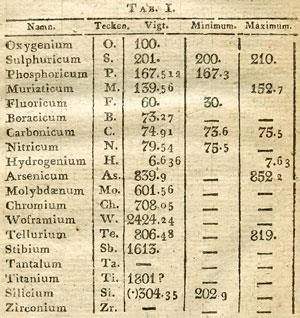 Berzelius’ table of atomic weights based on oxygen=100

Eventually Berzelius accepted that such compounds did exist, though he regarded them as anomalies. Later, his dualistic theory was more seriously shaken by the discovery that negative chlorine could replace positive hydrogen in many hydrocarbons, without destabilising their molecules or significantly changing many of their chemical characteristics. It was not until the 20th century that the electron theory of valency confirmed that Berzelius was on the right track - though the bonding mechanism proved to be far more complex than he, or his critics, imagined. However, we must beware of assessing scientists of past ages in terms of how far their theories were ’right’ or ’wrong’ by present-day standards. A provocative error which stimulates further enquiry may do more for the advancement of knowledge than a banal truth.

Berzelius’ theories - whether right or wrong -contributed massively to the evolution of chemistry as a discipline. This was because he was continually testing them in the laboratory, developing new techniques and pieces of apparatus as he did so. Younger chemists travelled from all over Europe to work under his supervision, and carried his ideas and methods home with them. This network of personal contacts, together with his experimental work and his prolific publications, made him the centre of European chemistry for more than two decades.

Berzelius and his co-workers made many significant discoveries, including several new elements - cerium, selenium, thorium, lithium, vanadium and sundry lanthanides. He also produced the most reliable table of atomic weights then available, by interpreting his own meticulous experimental results in the light of Joseph Gay-Lussac’s law of combining volumes, Eilhard Mitscherlich’s law of isomorphism, and the atomic heat law of Pierre Dulong and Alexis-Th?r?se Petit. But his most enduring contribution was his system of chemical notation. While preparing his 1808 textbook he had encountered considerable confusion over the naming of elements and compounds, and he was determined to do something about it. Having addressed the question in general terms in a French essay of 1811, he explained his system in a series of articles published in a British journal in 1813 and 1814.

Following the precedent set by Linneaus, who assigned a definitive Latin name to every plant and animal, Berzelius adopted - or invented - Latin terms for the elements whenever possible. He took the first letter of this name (capitalised) as its atomic symbol, adding a distinguishing second letter (in lower case) for elements with the same initial. To iron he gave the symbol Fe, from ferrum  - the metal’s name in Latin. The Romans never knew metallic sodium, but they called common soda (sodium carbonate) natron  , and from this Berzelius coined the name natrium  for the element, giving its atom the symbol Na. Having organised the elements, he then tried to create a notation for compounds which revealed their chemical nature, as well as their constituent elements.

This task proved more difficult, and Berzelius (and others) went on adjusting the system for years. At first he indicated the numbers of atoms with superscripts, so that sulfur dioxide was written SO2. Later, he tried denoting oxygen atoms by dots over the symbol of the oxidised element, representing sulfur dioxide as

- though eventually, the numerical subscript version (SO2) became the standard form. At first, many chemists were not impressed by the Berzelian symbols - Dalton himself hated them. For some years even Berzelius did not use the symbols extensively in his publications, but by the mid-century they were generally accepted. Today, they still provide us with the tools for representing elements and compounds unknown to Berzelius and his contemporaries. 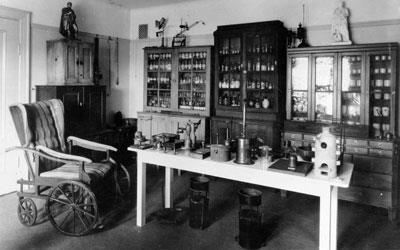 Outside the laboratory, Berzelius’ life was relatively uneventful. He travelled widely in his later years, was honoured by foreign universities and learned societies, and continued to take an interest in research after his retirement in 1832. In 1835 he married Elizabeth Poppius (an old friend’s daughter), and received the title of Baron from the Swedish monarchy. He died in 1848, four decades after being elected to Sweden’s Royal Academy of Science in the eventful year of 1808.

Mike Sutton is a visiting fellow in the School of Arts and Social Sciences at Northumbria University, UK