In 1858, a new theory revolutionised organic chemistry, but its originator was brushed aside. Mike Sutton revives the memory of Archibald Scott Couper

In 1858, a new theory revolutionised organic chemistry, but its originator was brushed aside. Mike Sutton revives the memory of Archibald Scott Couper

Today, we would be surprised to hear of a chemist who began studying science at the age of 24 and started serious research only eighteen months later. If this research produced a significant theoretical advance within two years, we would be astonished. But one hundred and fifty years ago the frontiers of knowledge were closer, and enterprising beginners could rapidly reach uncharted territory. Nevertheless, when Archibald Scott Couper announced his brilliant new idea in the spring of 1858, it was greeted with a cool reception. 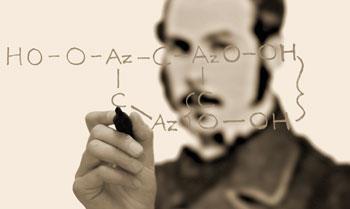 Couper is now regarded as a pioneer of structural chemist

Couper’s story is one of quiet tragedy. Soon after the publication of his groundbreaking paper, his fragile health collapsed, and long before he died, in 1892, his pioneering work was forgotten. But just a few years later he was recognised as the first person to deploy structural chemical formulae in the modern manner.

Couper brought his ideas into a decade when chemistry was in a confused and confrontational state. By the late 1850s, when the young chemist published his structural ideas, chemistry’s senior professionals lacked a theoretical consensus. Between August 1857 and June 1858, he announced three discoveries to the Paris Academy of Sciences. His first paper - an account of the synthesis of bromobenzene and p-dibromobenzene - was uncontroversial. His second, on salicylic acid, initially attracted little attention, though it later caused some debate. But the third, Sur une nouvelle th?orie chimique, proposed the existence of carbon-carbon chains - and that got him into serious trouble.

Couper was born on 31 March 1831, in Kirkintilloch, near Glasgow in the UK. He became a dedicated student, reading classical languages and philosophy at Glasgow and Edinburgh, and from 1851 he spent part of each year in Germany. After mastering the language, Couper attended lectures at Halle and Berlin, but there is no evidence of his studying chemistry before 1855.

Even so, by the summer of that year, he was following the lectures of Karl Rammelsberg and Franz Sonnenschein at Berlin University, and gaining practical experience in Sonnenschein’s laboratory. In August 1856, he moved to Paris, and started serious research under the supervision of Charles-Adolphe Wurtz. It was there that he encountered both triumph and disaster in rapid succession. 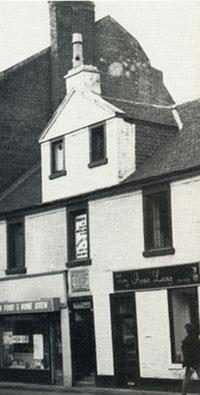 In the 1850s many chemists dismissed atomism as a speculative hypothesis - inferred from numerical regularities in the combining weights of various elements. (The last anti-atomic diehards conceded defeat after Jean Perrin’s work on Brownian motion was published in 1908.) Even those chemists who did believe in atoms, disagreed about their weights, their modes of combination, and their spatial arrangement.

Some accepted the HO formula for water, giving oxygen an atomic weight of 8 units. Others preferred H2O, making oxygen’s atomic weight 16. Carbon might be rated as 6 or 12 - causing disagreement over the representation of organic compounds. Though they generally compare well with modern values, Couper’s formulae were based on O = 8, and consequently had double the correct number of oxygen atoms. (This was soon to be resolved by Stanislao Cannizzaro’s revival of the Avogadro hypothesis, which confirmed O = 16 as correct.)

There was debate about the forces binding atoms together. The Swedish chemist Jacob Berzelius developed a theory of chemical combination based on the attraction between opposite electrical charges on individual atoms (or on stable groups of atoms, called radicals). This dualistic theory explained why many inorganic molecules were split by electrolysis. But it was less successful with organic substances - many of which remained unaffected by electricity.

Crucially, dualism failed to explain how a stable hydrocarbon molecule could exchange one atom of (positive) hydrogen for one atom of (negative) chlorine, resulting in an equally stable chloro-hydrocarbon molecule. Organic chemists like Jean-Baptiste Dumas and Charles Gerhardt preferred a theory of types which sorted similar compounds into family groups, while reserving judgement about the forces holding their constituents together.

There were questions about how atoms and molecules were distributed in space. Berzelius had puzzled over pairs of compounds with the same composition but different properties, introducing the term ’isomerism’ for this phenomenon. Several chemists (including Joseph Gay-Lussac and Michel Chevreul) suggested that the molecules of these pairs of compounds contained the same atoms, arranged in different geometrical patterns. The nature of the patterns, however, remained mysterious.

The significance of Couper’s new theory (which appeared in a fuller English version soon afterwards) resides in two assertions. The first was that the combining power of carbon (later known as its valency) was normally four. However, Couper was aware that carbon could sometimes exhibit a combining power of two, for example in carbon monoxide. He apparently assumed that this also occurred in unsaturated hydrocarbons like ethylene (ethene) - his diagrams contain no carbon-carbon double bonds.

Couper’s second and more radical assertion was that carbon could ’enter into chemical union with itself’ - its atoms joining together in long chains. Examples of this phenomenon which he cited were propyl and butyl alcohols (propanol and butanol). Their formulae are C3H8O and C4H10O in modern notation, but C3H8O2 and C4H9O2 in his, taking 8 rather than 16 as the atomic weight of oxygen. This conveniently explained the existence of numerous series of carbon compounds where each member differs by CH2 from the next one in the sequence. 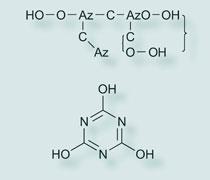 Couper’s drawing of the structure of cyanuric acid (top). The use of brackets alongside the bond lines is confusing, and Couper gives nitrogen as Az in the French manner, while once again doubling the oxygen atoms - but his picture has a recognisable relationship with the structure now accepted for this compound (bottom)

Later in 1858, a revised version of this paper appeared in another French journal. It included another interesting speculation. Couper discussed some carbon-nitrogen compounds, including cyanuric acid (2,4,6-trihydroxy-1,3,5-triazine) to which he gave a ring structure (see below). From here it would have been a short step to the benzene ring - seven years before Kekul? got there - but Couper never made it.

The first version of Couper’s new theory was handed to his supervisor early in 1858. But Wurtz was so slow in submitting it to the Academy that it did not appear in print until 14 June. Meanwhile, on 19 May, the German chemist August Kekul? had published a paper arguing along similar lines. He responded aggressively to Couper’s article, dismissing it as deficient in both clarity and originality, and claiming exclusive priority for himself as the discoverer of carbon-carbon chains. Most historians now believe this was unjustified.

As Kekul? himself later admitted, the concept of valency was still ’in the air’. Earlier in the 1850s William Odling had talked of the ’replaceable value’ of an atom or radical; Edward Frankland and Herman Kolbe used ’atomicity’; and Alexander Williamson ’saturation capacity’, for the same property. (It was not until the mid-1860s that the German word valenz became current - along with valence in French and valency in English.)

But by 1858, many chemists agreed that this quantity - whatever they called it - normally had the value of four for the carbon atom. However, if that was so, then the molecules of many organic compounds seemed to contain more carbon atoms than the available atoms of other kinds were able to ’saturate’.

At this point, Couper and Kekul? independently realised that the discrepancy could be explained by assuming that the carbon atoms could soak up each other’s surplus ’saturation capacity’ by joining together in chains. Couper, by actually providing diagrams of his conjectured molecular arrangements, went a step further than Kekul?. But though he was posthumously acclaimed as the one of the founders of modern structural chemistry, his contribution was brushed aside at the time.

It is not hard to find reasons for this negative response. Couper’s paper made ambitious claims, while expressing scorn for earlier chemical theories (and their adherents). This alone - given the author’s lowly professional status - might explain its unfavourable reception. But other factors may also have been involved. In the spring of 1858 Kekul? was not far above Couper on the career ladder. As a privatdozent at Heidelberg he was licensed to teach but unsalaried, living on the fees paid by any students he could recruit to his classes. Not until later that year did he gain the security of a professorship at the University of Ghent in the Netherlands.

Kekul? might well have seen Couper’s paper as a challenge to the uniqueness of his discovery, and hence a threat to his career. If so, he would naturally want to respond forcefully. In that era, disputes between rival chemists often degenerated into exchanges of personal insults, and Kekul? participated with zest in many such battles of words. A recent biographical study explores several in which he was involved, while also citing examples of Kekul?’s reluctance to acknowledge intellectual debts to others.

Couper did not reply to Kekul?. Instead, he complained to Wurtz about the delay in publishing his paper, and Wurtz responded by expelling him from the laboratory for his insolence. Couper then returned to Edinburgh and worked briefly as an assistant to Professor Lyon Playfair, but within a year he suffered a breakdown. Thereafter he remained an invalid, unable to work and nursed by his devoted mother. Chemistry moved on, and soon forgot him.

In 1860 Kekul? introduced his own structural diagrams - the unwieldy ’sausage formulae’. 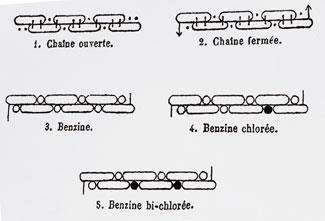 His hexagonal formula for benzene was unveiled in 1865, and thereafter, structural chemistry advanced rapidly, with further notable contributions from Alexander Butlerov and Alexander Crum Brown. In 1874, a third dimension was added to chemical structure by the stereochemical discoveries of Jacobus Van’t Hoff and Joseph Le Bel.

We now take it for granted that the structure of a molecule can be as significant as its composition - particularly if it is a biologically important molecule like DNA or haemoglobin - but in 1858 this required a leap of the imagination. That leap can fairly be described as a revolution, or a paradigm shift, and Couper was certainly one of those who initiated it. If his new theory had received a better reception, his physical and mental decline might have been averted, and he might then have played a larger part in the further development of structural chemistry. Yet one thing was belatedly salvaged from the wreck of Couper’s career - his reputation.

After Kekul? died in 1896, his successor at Bonn University, Richard Ansch?tz, began writing his biography. While doing so, he rediscovered Couper’s long-neglected work and made a successful effort to rehabilitate him, with assistance from Crum Brown. One consequence was that in 1931, the centenary of Couper’s birth, a commemorative plaque was unveiled in Kirkintilloch, in the presence of many leading Scottish chemists. The prophet was at last honoured in his own country.

Michael Sutton is a lecturer in history at Northumbria University, UK.