In 1789 Nicolas Leblanc was lauded for developing an industrial process that turned salt into soda. Then the French revolution stripped him of everything he had worked for.

In 1789 Nicolas Leblanc was lauded for developing an industrial process that turned salt into soda. Then the French revolution stripped him of everything he had worked for.

On 16 January 1806 French chemist and surgeon Nicolas Leblanc committed suicide, after a long struggle to recover control of the valuable chemical process he had developed 15 years earlier - to develop soda from salt. Twenty years later, entrepreneurs were working his process profitably and it became a key component of the booming chemical industry.

The story of Leblanc may seem a straightforward case of a genius who was ahead of his time, but the real story is more complex. It connects scientific knowledge, technical expertise, commercial enterprise and political circumstances, raising issues that remain relevant two centuries later.

Leblanc was born near Orl?ans, France, on 6 December 1742, and by 1751 had lost both parents. His guardian was a doctor, and on reaching adulthood he studied surgery in Paris.

In 1780 he became the medical attendant of Louis Philippe II, duc d’Orl?ans - a radical aristocrat who renounced his title and renamed himself ’Philippe ?galit?’ following the 1789 revolution. He encouraged Leblanc’s chemical experiments, and in 1791 provided funding for his factory at Saint Denis, near Paris. In quieter times they might have grown rich from Leblanc’s process, but the revolution devoured them both.

The opportunity before them was real enough. During the 18th century, demand for soap and glass had increased. John Wesley was not alone in preaching that cleanliness was next to godliness, but while soap remained expensive, the poor (and the not-so-poor) still washed infrequently. And although this was Europe’s ’age of enlightenment,’ literacy and learning spread slowly while the price of window glass kept most houses short of daylight. Efforts to expand production of soap and glass were inhibited by heavy taxation on both commodities and by a shortage of a vital ingredient that both required - alkali.

Coming out in the wash

Soap had been made in Europe since Roman times by heating fats and oils with caustic soda or potash (sodium or potassium hydroxide). This produced a semi-liquid cleansing agent, but by 1600 artisans were adding salt to the mixture, which precipitated a firmer and purer soap.

To make the necessary caustic alkalis, ordinary soda or potash (sodium or potassium carbonate) had to be heated with quicklime (calcium oxide). Heating soda or potash with lime and fine sand (silicon dioxide) produced glass - a technique known to the Egyptians by 2000 BC. For centuries, clear glass was made in small pieces, and with considerable difficulty. Only the wealthy could afford glazed windows. Although output grew during the 18th century, both glass and soap remained expensive. Before the illiterate could be enlightened, or the unwashed cleansed, alkali production had to be increased.

Crystalline soda from the Egyptian desert had been traded since antiquity, but the supply was too small for Europe’s soap boilers and glass makers. They used potash extracted from wood ashes and purified by recrystallisation, or soda produced similarly from the ashes of seaweed and shore plants. As demand for alkali increased, potash was brought from North America, burnt kelp from the Scottish highlands, and barilla from Spain. Soap and glass manufacturers also began extracting residual alkali from their wastes.

Meanwhile, British and French chemists searched for a way of producing alkali cheaply from local sources, and in 1783 the Paris Acad?mie Royale des Sciences offered a prize for the most satisfactory method. Leblanc’s method was eventually acknowledged as the best, although he never received the prize money.

When Leblanc announced his discovery in 1789, several procedures had already been tried in France, Scotland, England and Sweden. They started by heating common salt with oil of vitriol (sulfuric acid) - or sometimes pyrites (ferrous sulfide) or copperas (ferrous sulfate). This liberated marine acid gas (hydrogen chloride), which some manufacturers then used to make bleach. Others simply released it into the atmosphere, enraging their neighbours and devastating local vegetation.

The critical product was Glauber’s salt (sodium sulfate), which was then converted to sodium carbonate by various means.

Chemists already knew that soda, potash and limestone all had the same base (in modern terms, they are all carbonates). Earlier experimenters had therefore tried blending sodium sulfate with limestone or chalk (calcium carbonate), and treating this mixture in various ways with additives like charcoal, iron, or lead oxide. They did make some sodium carbonate, but it was too impure - and too expensive - to persuade most glass and soap manufacturers to abandon traditional sources of alkali.

Late in the 1780s, Leblanc tried heating sodium sulfate in a reverberatory furnace with a mixture of limestone and charcoal. The reaction is complex - it was not fully understood for another century - but can be represented approximately as:

As the carbon monoxide burnt off above the molten mixture, changes in the flames indicated when the process was approaching completion. The melt was poured into moulds to cool, after which the soda was dissolved in water (leaving behind an obnoxious sludge) and purified by recrystallisation. Scaling up this process from a laboratory experiment to an industrial operation required much effort and ingenuity from Leblanc and his assistants. By 1793 they had solved most of the technical problems, but one critical ingredient - sulfuric acid - was becoming unobtainable. Sulfuric acid was usually made by burning sulfur with saltpetre (potassium nitrate). When foreign armies invaded France seeking to restore the monarchy, the republic commandeered saltpetre stocks for making gunpowder. 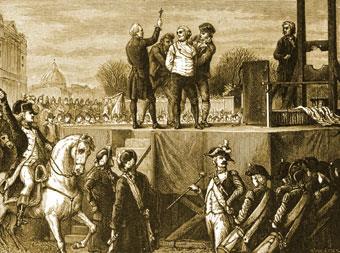 Nicolas Leblanc was funded by the duc d’Orl?ans, who lost his head during the French revolution

Worse was to follow. Leblanc’s financial backer, Philippe ?galit?, was accused of having Royalist sympathies, and guillotined in November 1793. The soda factory was confiscated in January 1794, along with Philippe’s other assets, and to assist the war effort the government made details of Leblanc’s process publicly available.

Leblanc found other work as a chemist, while petitioning ineffectually for the restoration of his exclusive rights to the process. Meanwhile, the Saint Denis factory remained idle. Although Leblanc regained access to his near-derelict factory by 1801, he lacked sufficient capital to get it running again. In November 1805, he finally received some compensation for the assets which France’s Revolutionary government had taken from him. However, the award was too small to re-establish his business, and in desperation Leblanc shot himself.

By the time of his suicide in 1806, entrepreneurs in France and England were just beginning to exploit Leblanc’s process, though with limited commercial success.

England’s first Leblanc soda factory was established on Tyneside by John and William Losh, supported by Archibald Cochrane, Earl of Dundonald. Their coal pit at Walker provided fuel, and contained a brine spring which conveniently supplied them with salt. William had visited Paris, and knew about the French attempts at soda making.

However, in the 1790s the Loshes favoured a Swedish process involving lead oxide (its other saleable product was basic lead chloride, a useful yellow pigment). During the Peace of Amiens (1802-1803), William returned to France and by devious means acquired sufficient technical information to run Leblanc’s process, though only on a small scale. Mass production of Leblanc soda, by Charles Tennant at Glasgow and James Muspratt at Liverpool, did not begin until the 1820s. 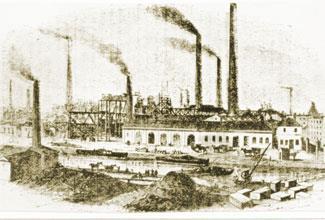 The Loshes had bought in sulfuric acid from Scotland, but later alkali works made their own on site. In 1836, William Gossage invented an absorption tower which dissolved the hydrogen chloride generated by the Leblanc process, and some firms used the resulting hydrochloric acid to make saleable bleaching products. (In 1863, Britain’s Alkali Acts encouraged this shift by penalising the release of noxious fumes.)

By 1890, even the evil-smelling sulfide waste from the Leblanc process was being treated to recover pure sulfur, which was then used to manufacture sulfuric acid.

Solvay lost a lot of money trying to work his process industrially, but during the 1870s further innovations by Ludwig Mond and John Brunner made it economically viable. (The Brunner-Mond company merged with several others in 1926 to create the giant Imperial Chemical Industries corporation.) Eventually both processes were superseded by more efficient electrolytic methods, but for many years manufacturing Leblanc soda was a profitable sector of the chemical industry.

With greater persistence, adequate capital, and a more favourable political climate, Leblanc himself might have seen his brain-child through to maturity, but sadly this was not to be.