Chemical lift-off in the sub-Sahara

For the first time, sub-Saharan Africa’s economic growth rates are outstripping the worldwide average. When considered alongside the region’s undoubted wealth of raw materials, its easy to see why the region is becoming a rich prospecting ground for the chemical industry.

The last six to seven years of above-average growth reveal a dramatic economic turn-around. As recently as the late 1990s - with the exception of South Africa- increases in GDP in the region were so far below world growth levels that it was in danger of being decoupled from the rest of the global economy.

But with its sparse scattering of chemical production, limited mainly to petrochemicals and fertilisers, sub-Sahara remains the last major world region without a viable internationally competitive chemicals sector. Will the revival in the sub-Saharan economies be sufficiently robust to attract investment in chemical projects?

Along with its steady economic growth, sub-Sahara has enjoyed a massive rise in availability of foreign funds - although the chemicals sector is yet to benefit significantly. In the last four years, inflows of foreign direct investment (FDI) in the region have quadrupled, reaching around $40 billion (?27 billion) in 2008, according to a recent report by the International Monetary Fund (IMF). A high proportion of the rise in FDI has come from the Middle East and from Asia, in particular from China and India.

And despite the global economic downturn reducing demand for its exports, the IMF expects the strong interest in investing in the continent to continue; ’in part because rates of return there are high relative to those in mature markets and because sub-Saharan Africa offers unique diversification opportunities,’ it says.

A major impetus behind the increase flow of foreign investment in sub-Saharan Africa has been a greater readiness among governments to ease their tight control on their national economies. The close grip exerted by governments was a major reason for the region’s persistently slow economic growth rates in the 1980s and 1990s, many commentators believe, restricting average African per capita GDP growth to just over 0.8 per cent between 1965 and 1990. During the same period, the seven fastest growing developing countries outside Africa grew 5.8 per cent, and the rest of the developing world grew 1.8 per cent.

Sub-Saharan African governments began to relax their grip in the late 1990s, and over the last five years the average growth rates of real GDP have been over 6 per cent, and of per capita GDP around 4 per cent, according to IMF figures. 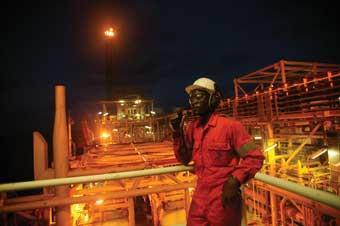 In the oil and gas sector of the region, governments have been opening up their downstream operations to foreign investment, and even to foreign control. ’Until a few years ago, refineries and petrochemicals production was in the hands of the state oil companies, so that even if we wanted to invest in them we couldn’t,’ says an official at one European oil company.

’Under the management of the government EPCL could not do well,’ explains Jossy Nkwocha, EPCL’s head of corporate communications. ’For ten years it could not carry out turnaround maintenance. The plant was run at below 20 per cent capacity and it could not pay for its feedstock supply from NNPC.

’Today, under Indorama, EPCL services about 84 per cent of the domestic market and exports the excess products to various countries in Europe, Asia and other parts of Africa,’ he continues. ’Nigeria is now a net exporter of petrochemical products.’

In Angola - sub-Sahara’s second biggest oil producer with an output of 1.7 million barrels per day in 2007, against Nigeria’s 2.4 barrels per day - the government is pressing ahead with downstream petrochemicals expansion, building a 200,000 barrels per day refinery. The Japanese government may partner with Angola to build the plant, providing funds in return for oil imports. The project, due to come on stream in 2013, will export 80 per cent of its output to regional markets.

Getting the goods to market 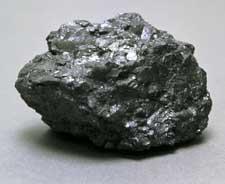 ’Although there will be more sustained economic growth in a whole range of sub-Saharan African countries with oil and gas reserves, they will not necessarily have individual petrochemical sectors, because they take time to develop,’ says Jim Virosco, project manager at Nexant ChemSystems, a New York-based consultancy. ’Meanwhile plastic converters and other users of petrochemical derivatives in the region will have to get their raw materials from North Africa or the Middle East.’

However, despite the recent international investment, there is still very little manufacturing activity in the region. The vast majority of the foreign investment is channelled into extracting the region’s vast mineral resources, with the unprocessed raw materials transported straight out of Africa. This merely reinforces the region’s traditional position in the global economy as a provider of commodities, such as oil, gas, metals and agricultural crops.

China has been particularly active in providing finance for equipment and infrastructure for oil and gas and mineral projects, while India has been concentrating more on funding the modernisation of existing plants, particularly in sectors like fertilisers.

Nonetheless, the growing presence of the Chinese, Indians and other Asian investors is already sparking a rivalry with the Western players who have traditionally been the main exploiters of the region’s resources. This can only help Africa pull in more foreign investment - particularly in downstream sectors - as Asian and Western countries compete to gain a bigger presence in the faster growing sub-Saharan economies.

As a result there are signs that far more foreign money is now going into projects which are providing a platform for manufacturing industry to take a much bigger share of the GDP of many of the sub-Sahara’s 50 countries. One vital means of stimulating this industrialisation is through the establishment of projects for turning raw materials into finished products with the help of locally produced chemicals. But here the opportunities are restricted because of a lack of local markets for downstream products.

’Sub-Saharan Africa’s problem is that it does not have enough domestic industry,’ explains Judith Chegwidden, director of Roskill Information, a London-based market research company specialising in minerals. ’It’s a Catch 22 situation. You get materials like natural soda ash being produced in southern Africa but it does not get processed much locally because of lack of local demand. There’s ilmenite being mined in Kenya, for example, as a raw material for titanium dioxide, but it’s shipped straight out of the country without being processed because of the lack of local demand for TiO2.’

The vast majority of sub-Saharan Africa’s 500 million population work in agriculture. With this strong reliance on farming, one local market that chemicals companies are looking to is fertilisers. But for inorganic fertiliser projects in the sub-Saharan area, the drawback is that, without government subsidies,many farmers have not been able to afford the international market price. This has particularly been the case over the last one to two years, when at one point the cost of some fertiliser blends went up as much as fivefold in some parts of Africa. 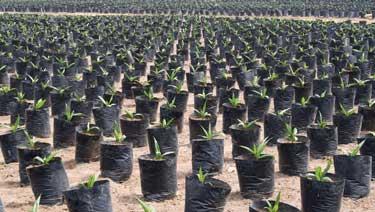 Oil palm is already being planted for biofuel in C?te d’Ivoire

A major stumbling block to producing fertilisers locally in sub-Saharan Africa is that the raw material phosphate rock is scattered across large areas , unlike the concentrated deposits found to the north in Morocco, Algeria and Tunisia.

However, Nexant ChemSystems believes that both North and sub-Saharan Africa has the potential to become a major global source of phosphate fertiliser as existing deposits of raw material become depleted. The region could also be a much bigger supplier of potash (potassium), the other major inorganic fertiliser.

’There are some places in Africa with phosphate rock deposits which look interesting, but are less interesting when the geography is taken into account,’ says Allan Pickett, group manager at CRU, the London-based consultancy in metals, minerals and chemicals.

’In Burkina Faso, for example, there are relatively large phosphate resources of quite good quality but it would be difficult to get them to the international market because of the long distance,’ he adds. ’It doesn’t have the infrastructure compared to that of phosphate resources in Morocco which are only a couple of hundred kilometres from the coast.’

And in Senegal, foreign investors had to come to the rescue of Chemical Industries of Senegal (ISC), the country’s industrial flagship, which makes phosphates and has accounted for 16 per cent of its exports. Two years ago it stopped production because of debts of around $500 million. But the Indian Farmers Fertiliser Co-operative (IFFCO) saw off competition from Groupe Roullier, a French fertiliser and agrochemicals supplier, to reach agreement with the Senegalese government on a $100 million investment in return for an 85 per cent stake in the company.

IFFCO, which was already a minority shareholder in the operation because it has been a major supplier of phosphoric acid fertilisers to India, has been restoring the plant to an optimum annual capacity of 600,000 tonnes.

The agreement with IFFCO should boost Senegalese president Abdoulaye Wade’s plans to make the country self-sufficient in food - an objective which has been met with skepticism among some Senegalese. 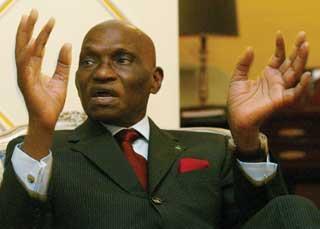 ’President Wade is urging business people to invest in land but the trouble it doesn’t make sense as a business proposition because of the costs of water and electricity,’ says a Senegalese economist. ’Fertilisers are supposed to be free for many farmers but because of unscrupulous middlemen they end up having to pay for them.’

Nonetheless Senegal is now among a growing number of sub-Saharan countries which sees subsidised fertilisers as a major means of boosting agricultural output. This follows the remarkable success of a subsidy programme launched by Malawi, against the opposition of aid agencies like the World Bank, after suffering regular food crises. Now the country is a net exporter of corn to its southern African neighbours.

Malawi, Tanzania and Kenya are among several sub-Saharan countries which have embarked on or are planning schemes to build their own fertiliser plants with the help of funds from Western, Middle Eastern and Asian investors. With the region having to import over 80 per cent of its fertiliser needs, domestic fertiliser production should help to bolster average grain yields which are one quarter of the world average.

Energy is another domestic market with a large unmet need - and for which agriculture could provide the answer. African governments and development agencies have latched on to the prospects for energy crops in their countries as raw materials for biofuels and even chemical feedstocks. Economic planners in the sub-Saharan region are also predicting that its large agricultural sector could be the source of supply for the world’s needs for feedstocks and products based on renewables.

In a recent study on biofuels the department of agriculture and resource economics at the US University of California, Berkeley, estimated that Africa accounted for just under 25 per cent of the world’s combustible bioenergy resources.

Already Western companies are beginning to invest funds into biofuel projects across sub-Saharan Africa by taking advantage of a greater willingness among the region’s governments to allow foreign investment in the agricultural sector and also to enter into public/private sector partnerships.

Fertilisers and other soil nutrients will not only help the production of more food but also the cultivation of crops with an industrial potential such as oilseeds and starch-rich tubers. These can provide a platform for new manufacturing sectors using oleochemicals and modified starches and other renewables-derived products such as biofuels. Chemicals sourced from agriculture could provide the key to the industrial future of the sub-Sahara.

Sean Milmo is a freelance science writer based in Essex, UK