Less than three years after forming, Quotient Bioscience is one of the fastest growing pharmaceutical outsourcing companies in the UK. Matt Wilkinson went to meet them

Less than three years after forming, Quotient Bioscience is one of the fastest growing pharmaceutical outsourcing companies in the UK. Matt Wilkinson went to meet them

In mathematical terms, a quotient is defined as the product of division. But in the contract research arena Quotient Bioscience is one of the fastest growing pharmaceutical outsourcing companies in the UK. 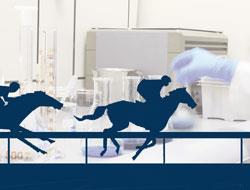 Quotient’s recent purchase of the Amersham Radiolabelling Services business from GE Healthcare is the seventh it has made since the company was formed in 2007 and ties together a series of what, at first glance, could be mistaken for a rather confusing series of acquisitions. However, instead of the purchases creating a company consisting of various disparate threads, the acquisitions have coalesced to form an early stage drug-discovery service provider with the unusual ability to offer fully integrated ’synthesis to clinic’ metabolism services.

While the costs and risks involved in developing new pharmaceuticals have spiralled upwards, the number of new drugs licensed has not. In 2008, the US Food and Drug Administration (FDA) only approved 21 new molecular entities and three biological drugs. This dearth of approvals has reduced the industry’s return on investment, and led to a boom in the amount of research, development and manufacturing outsourced to specialised service providers, reducing the capital investment needed to be made by pharmaceutical companies.

’Our service has been designed to reduce the complexity of the drug development process,’ says Paul Cowan, Quotient’s chief executive. ’We want to simplify the outsourcing process, reduce the time scales involved, and deliver greater value to our clients.’

From doping to drug development

Quotient was formed by a consortium of investors led by Cowan in January 2007, in order to buy Fordham-based HFL (Horseracing Forensics Laboratory) from the UK’s Horseracing Betting Levy Board (HBLB), in a deal worth ?20.25 million.

HFL was started over 40 years ago and has become the world’s largest sports drug surveillance laboratory - publishing over 300 papers and pioneering many bioanalytical techniques along the way. As the HBLB prepared to sell off HFL, it decided to diversify its customer base and use its expertise to provide bioanalytical services to the pharmaceutical industry.

At first the drug surveillance and drug discovery parts of Quotient look to be an uneasy fit. But Cowan believes the company’s understanding of these two areas gives it a unique selling point.

’Drug surveillance for sport is usually about identifying marketed drugs that could offer a competitive advantage. With our expertise in drug discovery we can often spot potential performance-enhancing drugs,’ says Cowan. ’Hand in hand with that, our drug surveillance work has given us a good handle on how you detect the fate of biopharmaceuticals in the body.’

Steve Pleasance, managing director of Quotient’s Bioanalytical Services unit, stressed that while the techniques and methodologies are highly complimentary, there are key differences. ’Drug surveillance is primarily a qualitative look at a sample, where ultimate sensitivity is key - there is zero-tolerance for around 2000 performance enhancing drugs. Each sample is submitted to up to seven different screens,’ says Pleasance.

’However, the pharmaceutical industry is looking for quantitative pharmacokinetic and pharmacodynamic data, they want to know exactly how much is there, where it goes and how it is metabolised. One of the most powerful ways of collecting this data is to use radiolabelled molecules whose presence and fate can be followed as the drug passes through the body.’ 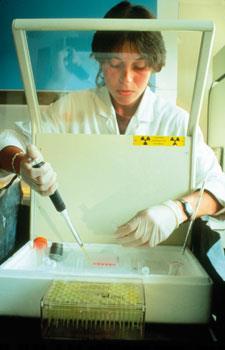 Radiolabelling of drugs is a specialised task

Quotient first moved into radiolabelling with its 2008 purchase of BioDynamics, which bolstered its analytical capabilities and added custom radiolabelling chemistry services for metabolism studies. The addition of the Amersham Radiochemicals business to the group significantly strengthens Quotient’s carbon-14 and tritium labelling capabilities, which will be re-homed in a new ?15 million laboratory in Cardiff, close to the old facility which GE is planning to close after the deal is completed.

’This will be one of the biggest single radiochemistry investments ever and we are gaining over 1000 [person-]years of radiochemistry experience as well as a fantastic client base,’ says Cowan. Amersham previously claimed that it had labelled one third of all approved drugs - and Cowan adds that the combined companies will make over 400 labelled molecules per year.

During the three years since Quotient Bioresearch marked its entry into the pharmaceutical services arena with the acquisition of HFL, the company has made a series of purchases so it can offer a unique combination of preclinical, clinical, analytical, custom synthesis and radiolabelling services. For example, it bought Pharmaceutical Profiles so it could add drug formulation development, manufacturing and clinical testing capabilities to its service offering.

Quotient’s presence in the clinical arena was further strengthened by its May 2009 purchase of Charles River Laboratories’ Edinburgh clinical research facility, which has a particular focus on being able to study the safety and metabolism of both small molecule and biological drugs from first-in-man trials through to Phase IIa.

Despite the recession, the company has continued to attract investment. In September 2008, the original investment team of Cowan, Helical Bar and Dencora were joined by TA Associates, which made a ?35 million minority equity investment in the company. And Quotient has continued creating new jobs on top of those added to the company’s payroll through acquisitions. It has created over 40 jobs in the last 12 months and now has over 600 employees - all of which own an equity stake in the firm.

’Traditionally, AME [absorption, metabolism and excretion] studies are very complicated and a pharmaceutical firm would have to deal with a number of specialist companies and have the headache of coordinating the work themselves,’ says Cowan. ’Quotient brings all the strands needed to conduct these studies together under one roof to minimise the risk factors.’

He says this means that any delays in the manufacture of the radiolabelled compounds can be predicted ahead of schedule and the risks of watching valuable carbon-14 labelled compounds degrading while a new time slot in the clinic is organised minimised (see box).

The short shelf life of carbon-14 labelled compounds initially sounds a little confusing. After all, the isotope has a half life of 5730 years (give or take 40 years) and the kinetic isotope effect suggests that a heavier isotope will react more slowly than the lighter one.

However, the radioactive decay process releases a beta particle [an electron], which can collide with adjacent molecules and create free radicals, explains Grant Johnston, Quotient’s director of chemistry. ’These can then react with other molecules to form a radical decomposition cascade known as radiolysis.’

The radiolabelled molecules can be stabilised by dissolving them in solution or formulating them in a matrix that will scavenge any radicals formed. If a molecule is particularly prone to radiolysis then it can be frozen to minimise decomposition, Johnston adds.

’The big CROs [contract research organisations] tend to be technology followers and only adopt the latest analytical tools after their clients have. In contrast, we try to adopt new technologies as soon as we can verify their benefits,’ says Cowan. He believes this drive to be at the forefront of technology helps to attract new clients - which has helped the company’s bioanalytical and clinical divisions see double digit growth in the last year.

This growth in turn helps the company invest in more new instruments and it currently has three top-of-the range UPLC-MS systems undergoing a head to head trial. ’Because we get to test instruments in head to head shootouts we often get asked by our clients for advice on which technologies they should invest in,’ says Cowan.