As restrictions are tightened on energy consumption within industry, Sean Milmo finds out how the chemical sector is fighting against its image as an energy glutton

As restrictions are tightened on energy consumption within industry, Sean Milmo finds out how the chemical sector is fighting against its image as an energy glutton

For many industries, energy efficiency is becoming as important as profit. Pressure on the chemical industry to improve its efficiency has increased dramatically in recent years. High energy prices are taking their toll, along with the caps on CO2 emissions through systems like the EU’s emissions trading scheme (ETS), which has been in operation since 2005. 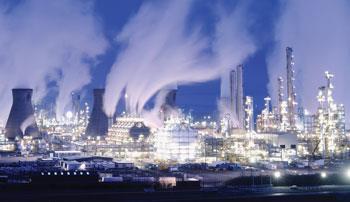 It is now a matter of serious competition between sectors, as consumers become increasingly aware, not only of matters like global warming, but also about concerns around energy security. Retail chains and brand owners in some countries, including the UK, are considering labelling their products to indicate their carbon footprints or the amount of CO2 emitted to manufacture both the products and their packaging.

As a result businesses could soon start competing on carbon footprints just as much as price, according to the Carbon Trust, a UK-based, government-funded organisation promoting the transition to a low-carbon economy. The first signs of this competition are emerging but, with pressure intensifying, the industry is starting to struggle to maintain the pace of its reform.

’Chemical companies are having to think about energy efficiency not only in terms of cutting costs and reducing CO2 emissions but also in respect of their public image,’ says Peter Botschek, director of energy, health, safety and environment at the European Chemical Industry Council (Cefic).

The industry’s strategy in Europe and North America is to continue to concentrate on improving the energy performance of production plants and related infrastructure, while also trying to demonstrate that its products are helping to increase energy efficiency downstream of their production.

More effort is being focused on life cycle analyses (LCAs) of chemicals so their contribution to energy efficiency can be judged not just on the basis of energy consumption during their production but also how much they help customers and end-users conserve energy during their lifetime and through to their disposal.

’Energy use at the production stage can give a false picture with chemicals,’ says Botschek. ’Production processes can appear to absorb a lot of energy but this can be offset by the large amounts of energy which can be saved by their application.’

This is a promising start, but the easiest energy-saving steps have already been taken - the downward curve is beginning to flatten out.

In their process R&D programmes, companies are giving priority to achieving big energy reductions. Bayer Material Science (BMS) has developed a gas-phase phosgenation technology to make toluene diisocyanate (TDI), a starting material for polyurethane foam, which uses 40 per cent less energy than the conventional process. The technology will be introduced for the first time on a commercial scale in a 300,000 tonne-per-year TDI plant being built by the company in Shanghai.

The chlorine needed to run the Shanghai TDI plant and an accompanying unit for diphenyl methane diisocyanate (MDI), another polyurethane raw material, will be supplied by the world’s largest hydrochloric acid recycling plant, which uses a new process similar to that used in fuel cells. This can perform electrolysis into chlorine and water at a much lower voltage, equivalent to a 30 per cent energy saving.

’Our policy is to reduce energy consumption as much as possible through technological innovations while producing polymer materials enabling our customers to be much more energy efficient,’ says a BMS official.

Ciba Specialty Chemicals revealed in August that since 2000 it had reduced energy consumption per tonne of product by 42 per cent through a series of measures - many of which involved improvements in energy management. These included better recovery of heat from processes, improved maintenance programmes, greater use of internal waste streams with high calorific value and purchasing of heat and steam from external cogeneration plants. 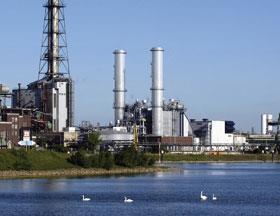 ’Ciba determines the energy to be used by an installation or a piece of equipment at the development and design stage,’ says David Bayne, the company’s group energy manager. ’The systematic checking of all major investment projects by an energy specialist is an integral part of our energy management concept.’

BASF, which runs the world’s biggest chemicals complex at Ludwigshafen, focuses on integrating every stage of manufacturing in what it calls its ’Verbund’ concept.

’Our aim is to use energy sources both as raw materials and for producing electricity and steam as efficiently as possible, to minimise consumption,’ explains Horst-Heinrich Bieling, BASF’s head of energy supply. ’The Verbund system uses the energy generated as excess heat during exothermic chemical processes in the production plants and converts it to steam. This steam is then fed through pipe systems into the BASF steam network.

’Without the Verbund system, the consumption of fuels throughout the BASF group would be up to 56 per cent higher,’ he states.

Running out of options

Many of the big reductions in energy consumption have tended to be achieved by large chemical producers - those that can afford to invest in new processes and energy-saving equipment, and to employ specialists in energy management. But even these large, wealthy businesses are beginning to find that they cannot make more big cuts to the energy they use without radical changes in the way they produce chemicals.

’We’ve been investing a lot of money recently in energy improvement to our large plants,’ says a senior executive at one leading European producer of bulk chemicals. ’But there comes a point when you cannot do much more to cut your energy consumption. Further investment will lead to diminishing returns. The only way to achieve lower consumption will be by having completely new plants.’

Cefic believes that, on an industry level in Europe, more energy efficiencies could be gained among small and medium sized producers (SMEs).

’There are an enormous number of SMEs in Europe and their energy consumption is a big part of the total energy picture for the whole industry,’ says Botschek. ’We suspect that there are more opportunities now for energy savings among SMEs than among the big companies.

’We aim to start a project next year which will involve investigating in different countries what can be done to help SMEs to raise their energy efficiency,’ he adds.

Despite all its effort to diminish energy consumption, the industry still has a voracious appetite. It seems destined to remain the most highly energy intensive of all the major manufacturing sectors. Some key parts of the industry require huge quantities of power. In the European chloralkali sector, electricity makes up around 50 per cent of total manufacturing costs. This high energy use is then passed on to the 60 per cent of EU chemical firms that rely on some form of chlorine supply.

In figures estimated by the International Energy Agency (IEA) - which include the energy content of raw materials as well as the energy used to process them - the chemical industry is by far the world’s biggest consumer. In 2002 its global share of industrial energy consumption was 34 per cent, after including feedstocks. The next largest consumer was non-metallic minerals at 11 per cent, followed by iron and steel at 10 per cent.

But fuels make up a large portion of the raw materials required by chemical industry. In 2004, for example, the European chemical industry consumed around 70 million tonnes of oil equivalent. Of this, only 10 million tonnes was used for fuel and power with the remainder being employed as feedstock. This disproportionately large energy content of its feedstock explains why the chemical industry’s share of industrial CO2 emissions is around half that of its energy consumption at 16 per cent. ’With plastics, for example, much of the energy content remains in the product as it goes through the value chain,’ explains Botschek.

But even when the chemical industry’s energy use is calculated on the basis of its combined input of both power and fuel, it remains top of the league. The US Department of Energy (DoE) calculates that the total annual energy input of its country’s chemical industry is around 5000 trillion British thermal units (Btu) - about a fifth of the total for the whole of the manufacturing sector. The next highest is petroleum refining with an input of around 3800 trillion Btu.

With the chemical and most other industries in the US, as elsewhere, a large proportion of energy input is lost during distribution and conversion. Only around 2200 trillion Btu or 43 per cent of the total input is applied by the US chemical industry in the processing of its products because of a high level of energy loss. With the petroleum refining and steel sectors, around 60 per cent of total energy input is used in processing.

The US chemical industry suffers from a high level of energy waste before its energy supplies reach its sites from outside sources. This waste amounts to around 27 per cent of total input against 10 per cent for petroleum refining, 19 per cent for steel and 30 per cent for glass.

The figures from the DoE, which is currently compiling statistics on energy use during the process stages in different industries, show that there is still scope for large energy savings just by targeting waste in distribution and conversion. Some of these losses within sites could be relatively simply reduced by, for example, more efficient use of pipes, valves and waste heat.

As higher energy costs become even more of a competitive handicap, many chemical companies will be forced to do more to tackle issues like energy loss, which will become economically intolerable. Greater energy efficiency through more effective management and maintenance may turn out to be the easier and cheaper option than investment in new production processes and equipment.

Sean Milmo is a freelance journalist based in Essex

US Department of Energy
Cefic