Two years in a spacecraft is a long time. Human hibernation is being explored as one way to get astronauts to Mars. Andrew West examines the possibilities.

Two years in a spacecraft is a long time. Human hibernation is being explored as one way to get astronauts to Mars. Andrew West examines the possibilities.

If you get bored and numb on long journeys, imagine having to spend years in your vehicle to reach your destination. That is the daunting timeframe currently facing astronauts wanting to travel to Mars.

However, even if such long journeys seem unfeasible, it is not altering the burning desire of space agencies to reach the red planet. US President George W Bush has announced that a manned mission to Mars is part of his plan for ’a new course for America’s space programme’, while the European Space Agency (Esa) is already planning to put a human on the surface of Mars in 2033. 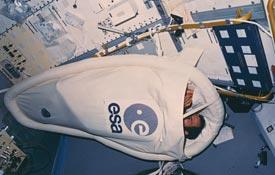 The return journey to Mars would take two years

If thoughts of long space journeys are making you think of regulated sleep and films like Alien or Fifth element, you would not be alone. Esa and Nasa both recently announced that they are funding research into methods that would allow astronauts to spend months or even years in suspended animation.

Aside from the boredom of long periods in a tiny spaceship with nothing to do and nowhere to go, there are very good logistical reasons to place astronauts in hibernation. Esa has estimated that a two-year return mission to Mars would require 30 tonnes of food to sustain six astronauts. Waste generation and oxygen usage during this period would also be significant. Hibernating humans need less food and oxygen and produce less waste than active ones. Overall, this would make the spacecraft lighter and reduce fuel demands.

But can scientists really control human beings’ sleep? This is just one of the ambitions of Esa’s aurora exploration programme, which is setting out a strategy for Europe’s solar system exploration over the next 30 years. Other areas of research include advanced propulsion systems such as ion drives and planetary protection systems to shield the Earth from incoming comets.

So how could scientists trigger human hibernation? Many animals hibernate during the winter months using specific chemicals such as hibernation induction trigger (HIT) to initiate and maintain their suspended animation. During hibernation, chemicals in the dormant creature’s body carefully control its metabolism and maintain its immune system. Scientists at Esa have observed that an injection of D -Ala-D-Leu-enkephalin, a synthetic, opioid-like analogue of HIT also known as Dadle, can put squirrels into a hibernation state during the summer.

Further research has studied the effect of Dadle in non-hibernating animals such as rats, and the team has observed that cultures of human cells divide less rapidly when Dadle is present. This research suggests that Dadle may be an effective trigger for hibernation in humans.

Unrelated research by Mark Roth and his colleagues at the University of Washington, US, and the Fred Hutchinson Cancer Research Center in Seattle, US, has found that mice can be put in a state of near suspended animation using hydrogen sulfide gas. H2S is naturally produced in humans and animals in small quantities and is believed to help regulate body temperature and metabolic activity. 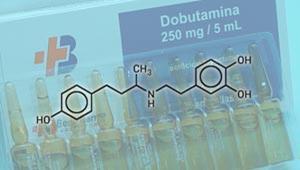 When put in a chamber filled with air containing H2S at a concentration of 80ppm, the test mice stopped moving and appeared to lose consciousness within minutes. The breathing rates of the mice dropped from the normal 120 breaths per minute to less than 10 breaths per minute and their metabolic rates dropped by 90 per cent. Their core body temperatures also dropped from 37 ? C to as low as 11?C.

’We are, in essence, temporarily converting mice from warm-blooded to cold-blooded creatures, which is exactly the same thing that happens naturally when mammals hibernate,’ explains Roth. ’We think this may be a latent ability that all mammals have and we’re just harnessing it and turning it on and off, inducing a state of hibernation on demand.’

After six hours exposure to the H2S-laced air, the mice were removed from the chamber and allowed to recover. Crucially, their metabolic rates, breathing rates and core body temperatures all returned to normal and tests showed they had suffered no ill effects from the gas. The team now intends to carry out similar studies on larger animals.

If it is possible to induce hibernation in humans, maintaining a healthy body and strong immune system during long periods of inactivity become very important factors; the human body loses 90 per cent of its muscle strength after just three months of inactivity. The team at Esa is already investigating compounds that could be used to sustain the astronaut’s physical health during hibernation. Helpfully, one such drug is already available and in widespread use.

Being able to trigger a state of suspended animation in human cells has possible benefits outside space travel. A major problem with transplanting human organs is preserving them while they are transported or stored. If they could be injected with a compound such as Dadle (D-Ala-D-Leu-enkephalin, a synthetic, opioid-like analogue of hibernation induction trigger) and held in suspended animation, this would greatly increase their lifetime while kept outside the body.

During long and difficult operations, placing a patient in hibernation and thus lowering their metabolic rate could relieve the burden on their system. Severely injured people could also be put into a hibernation state until hospital treatment is available. There is a military interest too. Suspended animation could be used to stabilise injured troops on the battlefield until a rescue team or doctor could reach them. ’Manipulating this metabolic mechanism for clinical benefit could revolutionise treatment for a host of human ills,’ says Mark Roth of the Fred Hutchinson Cancer Research Center in Seattle, US.

The treatments may also have potential in cancer research, where a suspended-animation state would allow patients to tolerate higher radiation doses without damaging healthy tissue. Cancer cells are not dependent on oxygen to grow so they are more resistant to radiotherapy. ’In most forms of cancer treatment we’re killing off the normal cells long before we’re killing off the tumour cells,’ says Roth. ’By inducing metabolic hibernation in healthy tissue, we’d at least be levelling the playing field.’

Research into using Dadle and H2S as novel therapeutic agents is already under way.

The drug dobutamine or   4-[2-[[3-(4-hydroxyphenyl)-1-methylpropyl]amino]ethyl]-1,2-benzenediol is widely administered to bedridden patients to strengthen their heart muscles while they are immobile or to help treat patients after a heart attack. Dobutamine is a synthetic catecholamine, a group of compounds that occur naturally in the body such as adrenaline, epinephrine or dopamine and are used as hormones or neurotransmitters. Dobutamine is a direct-acting inotropic agent: the drug increases the force of muscular contraction and, in small doses, produces relatively mild side effects such as increased pulse rate or high blood pressure.

However, the effects of long-term usage of the drug are unclear; it is known that it can cause arrhythmogenic effects in some patients, where muscle tissue can be replaced with fibrous tissue and fat. This would clearly be highly undesirable for an astronaut who would have to remain in peak physical condition throughout the mission.

An astronaut’s immune system could also be maintained using available compounds. Insulin-like growth factors (IGFs) are polypeptides with a high base sequence similarity to insulin that are used to treat growth disorders. There are two forms of IGF.   IGF-II plays a major role in the body’s early growth and development and remains essential for growth and development of the brain, liver and kidneys throughout life. The expression of IGF-I is seen in later life and affects almost every cell in the body, especially muscle, cartilage, bone, nerve, skin and lung cells. The compound also helps regulate cell growth and development, once again especially in nerve cells, and helps cellular DNA synthesis. Sustaining the health of all cells in the body maintains the immune system and helps fight infection.

However, there may be problems associated with the use of IGF-I in therapy. Research has suggested that the compound may play a role in the onset of cancer and diabetes and studies have shown that IGF-I stimulates the growth of both prostate and breast cancer cells. Other adverse effects include hypoglycaemia (low blood sugar); lipohypertrophy, where the cells in the body increase in size; and coarsening of facial features.

However, scientists are not in complete agreement about   IGF-I’s cancer risk or the implications of its prolonged use. For example, US milk is banned from sale in Europe because cows in the US are injected with genetically engineered recombinant bovine growth hormone (rBGH) to increase milk production. This leads to increased levels of IGF-I in milk that is considered by European scientists to cause cancer.

However, the US Food and Drug Administration advises consumers that ’the consumption of dietary IGF-I plays no role in either inducing or promoting any human disease, nor does it cause malignant transformations of normal human breast cells’, while US surgeon general C Everett Koop characterises cancer claims as ’blatant falsehoods as part of a long-running campaign to scare consumers about a perfectly safe food’. This disagreement has continued for many years and   long-term studies remain inconclusive.

Another major problem associated with long periods without moving is bedsores. Bedsores occur when prolonged pressure on a specific area of the body causes the capillaries to collapse and restricts the flow of blood to cells in the area. This leads to both restricted drainage of fluid from the cells and flow of nutrients into them and eventually causes cell death and necrosis. One possible way to prevent this could be to use electrical stimulation to exercise the astronaut’s body and muscle tissue and cause movement to alter the pressure points. Once again, however, there are no long-term studies on such treatment.

If all these physical issues were overcome, there is still the question of how well the human mind would adapt to long periods of unconsciousness. Scientists are not in complete agreement over this, but Wendy Exton, former chief medical officer of Halton Haven Hospice in Runcorn, UK, who has worked with coma victims, believes this issue may be minor. ’Psychologically, the human mind tends to cope quite well with the loss of time,’ she explains. However, she agrees that further research is required. ’Humans have many layers of consciousness. We would need to look closely at how these are affected before humans could be confidently placed in suspended animation for long periods.’

It is evident that even if the technology and chemistry to control human sleep ever exists, there is a long way to go before we obtain it.

Andrew West is a science writer based in Rugby, UK

Space food has evolved significantly since John Glenn ate apple sauce from a tube while in orbit around Earth during project Mercury in 1962. However, there is no way to keep fresh food edible for months or even years in space. Currently on space flights, drinks are powdered and food is either freeze-dried or sealed in lightweight pouches that can be heated in an onboard microwave oven. 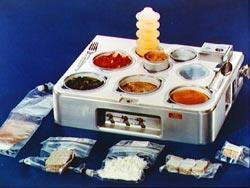 There are currently about 300 items of food to choose from and the menus repeat every 10 days. This would get very boring after years in space. Recently however, Nasa has begun research into a food replicator system. The device will not replicate food from the atom up like in Star trek, but would take a small number of common ingredients such as oil and sugar and, using a ’cook book’ of mathematical formulae, mix them together in different ways to create your desired dish.

While the device is currently in the very early stages of development, Nasa hopes that the project could end the boredom of space food within the next 40 years.