Had it not been for nitrous oxide's subversion as a recreational folly, its utility as an anaesthetic could have been uncovered much earlier, as John Mann discovers

Had it not been for nitrous oxide’s subversion as a recreational folly, its utility as an anaesthetic could have been uncovered much earlier, as John Mann discovers

The terrified patient awaiting amputation in the Thomas Rowlandson cartoon (see below) was an all too familiar sight in 18th century surgeries. With access to nothing more than alcohol and laudanum - a herbal tincture of opium - for pain relief, the patient was as likely to die from shock as he was to succumb to post-surgical septicaemia. The introduction of diethyl ether in 1846, and chloroform one year later, ushered in the era of anaesthetics. But it could have happened half a century earlier if the anaesthetic properties of nitrous oxide had been appreciated by Thomas Beddoes and his associates at the Pneumatic Institution in Bristol, UK. 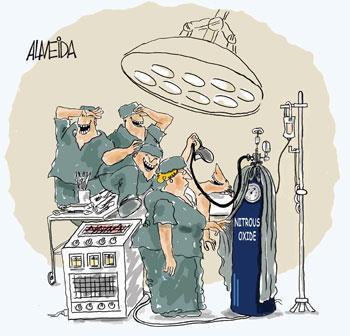 Beddoes was one of the most interesting figures of the late 18th century who combined eminence as a scientist, medical doctor and essayist with great zeal as a social reformer and political agitator. Born in Shropshire in 1760, he had a privileged education which included courses in medicine and chemistry at the University of Edinburgh, followed by study for a medical doctorate at the University of Oxford.

He was made a reader in chemistry at Oxford in 1788, and quickly became one of the university’s most popular lecturers. However, he became disillusioned by the religious fervour and restrictions on study under what he called ’the shadow of this ecclesiastical and scholastic institution’, and resigned his readership in 1792. The next 16 years of his life were devoted to attempts to use his chemical and medical knowledge for the benefit of mankind.

His inspiration came initially from the work of Joseph Priestley and Antoine Lavoisier, who had both laid claim to the discovery of oxygen in 1774-1775, though the latter had more clearly demonstrated that the newly discovered gas was consumed when substances were combusted in air. Oxygen was to be one of the major gases of what Beddoes termed ’pneumatic chemistry’. It became a key constituent of his therapy for diseases like consumption (tuberculosis) and asthma - where it was well known that a change of air could be beneficial.

The first premises for his Pneumatic Institution were located in the Hotwells area of Bristol, just down the hill from Clifton, once a thriving spa centre just a few miles down the River Avon from the more famous spa town of Bath. Beddoes’ earliest experiments involved administration of oxygen to himself and to his patients, and he claimed immediate success in the treatment of pulmonary consumption as well as predicting (in a letter to the great polymath of the day Erasmus Darwin) that his therapy might also be of benefit to those suffering from typhus, diabetes, palsy and hysteria. 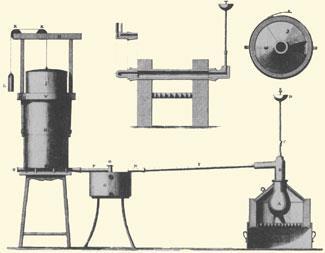 Source: © CONSIDERATIONS ON THE MEDICINAL USE AND ON THE PRODUCTION OF FACTITIOUS AIRS (1795)

Watt’s gas generator, used by Beddoes to produce and capture a variety of gases

His pronouncements began to attract the attention of rich benefactors, and the Pneumatic Institution was visited by Georgiana, Duchess of Devonshire and Tom Wedgwood, son of the pottery magnate Josiah Wedgwood. Their personal and financial support allowed Beddoes to commission a new gas generator from the country’s leading engineer, James Watt. This new equipment allowed Beddoes to produce oxygen from mercuric oxide; hydrogen from zinc and sulfuric acid; and carbon dioxide from red hot chalk; with each gas collected and stored in oiled silk bags. 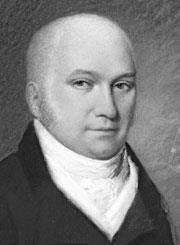 In 1795 the growing reputation of the Pneumatic Institution attracted the interest of two aspiring young poets, Robert Southey and Samuel Taylor Coleridge, who had recently moved to Bristol. Both were intensely interested in the relationship between body and mind, and so it was natural that they should wish to observe the affects of Beddoes’ experiments on the levels of perception of his patients.

Not surprisingly they were soon participating - consuming both the gases and other substances available in Beddoes’ institution. Coleridge began taking laudanum in 1797 because he was ’tottering on the edge of madness’, while Beddoes helped Southey experiment with ether during the harsh winter of 1798. Southey was apparently fearful that he had a heart defect and claimed to be exhausted by overwork, though in reality he was probably a hypochondriac.

However, Beddoes was quick to realise that his scientific investigations needed better publicity than that afforded by testimonials from a handful of grateful consumptives and two impoverished poets, so he embarked upon a series of lectures. In particular, he began to expound his strong views about preventative medicine that centred around his belief that the air people breathed could influence their susceptibility to disease.

For example, in his experience butchers never died from consumption. He therefore proposed the introduction of inhalation therapy using air collected from the vicinity of livestock. This novel yet esoteric idea was never put to the test, since more exciting discoveries followed the appointment of the young Cornishman Humphry Davy as laboratory superintendent in 1798.

Davy, born in Penzance in 1778, was by all accounts passionate about science and had been carrying out chemistry experiments (from making fireworks to smelting metals) from an early age. Shortly after his appointment, he and Beddoes relocated the Pneumatic Institution to new premises in Clifton in March 1799, and were soon offering free ’pneumatic treatment’ to anyone with consumption, asthma, scrofula and ’obstinate venereal complaints’. 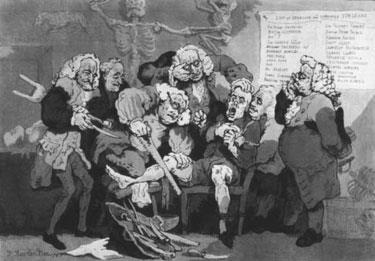 Before anaesthesia, surgery was a painful and risky business

They were, not surprisingly, immediately inundated with willing volunteers. Despite long hours spent with the patients, Davy embarked upon new research involving ’dephlogisticated nitrous air’ first described by Priestley in 1772. This was in reality a mixture of nitric oxide (NO) and nitrous oxide (N2O), which Priestley had prepared by the action of nitric acid on iron filings. Davy quickly managed to separate the gases by allowing the NO to oxidise to nitrogen dioxide, which he absorbed in aqueous base. The residual nitrous oxide was collected in Beddoes’ oiled silk bags. He subsequently showed that it could be more easily obtained by careful heating of the potentially explosive ammonium nitrate, keeping the temperature below 240?C.

In April 1799, Davy sampled the gas for the first time and reported a slight dizziness, followed by an enhancement of his senses - ’the objects around me became dazzling and my hearing more acute’. After this he ran and leaped around in a high state of hilarity. Beddoes was obviously hugely impressed by the antics of his young associate, and wrote at once to his mentor Erasmus Darwin and his sponsor Josiah Wedgwood about this gas that ’acts by giving excitability or life.’

Southey was soon experimenting with this new exotic substance, and wrote to his friend Tom Wedgwood that the gas ’made me tingle in every toe and finger tip - it makes one strong and happy, so gloriously happy’. While Beddoes tried to carry out a serious investigation of the therapeutic benefit of nitrous oxide, Davy embarked upon a programme of self-administration, taking as much as six quarts of gas at a time - a whole bagful!

The intense pleasure he always experienced led him and Beddoes to promulgate the idea that discrete pleasure centres existed in the brain, and might be stimulated by nitrous oxide, thus freeing mankind from the usual constraints of the body and mind. Davy also suggested that pain could be diminished since he had cut himself badly during one of his self-administration sessions, and had felt little pain.

Unfortunately, it was the pleasurable side of nitrous oxide that caught the public’s imagination, rather than the potential for pain relief. The famous Gillray cartoon of Davy demonstrating ’laughing gas’ to an audience at the Royal Institution in June 1801 (opposite) shows the amused and even derisory view of London Society. 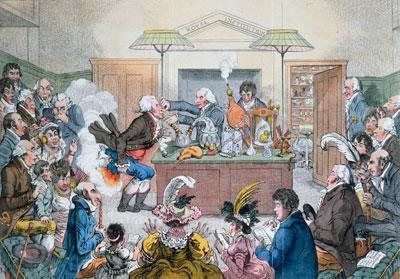 With the likes of Coleridge (now consuming vast amounts of laudanum) declaring that nitrous oxide had given him ’more unmingled pleasure than I had ever before experienced’, the serious scientific and medical work of the Pneumatic Institution was quickly overlooked.

In fact, the medical benefits of nitrous oxide were mixed. Although there had been some apparent success with palsy, alarmingly, in women the gas often produced hysteria. Increasingly the Institution came to be viewed as a place where patients became the subjects of the ever more esoteric experiments of Davy and Beddoes.

This growing notoriety was not helped by Beddoes’ widely known support (in the form of his many pamphlets) for Jacobin activities and his outspoken opposition to the war against Napoleon’s France. These views attracted the anger of the government, which encouraged production of various articles and pamphlets that satirised the activities of the Pneumatic Institution, promulgating the view that it was a hotbed of iniquity and licentiousness.

To counter these aspersions, in 1800 Davy produced a 600 page report of his experiments, under the title Researches chemical and philosophical, chiefly concerning nitrous oxide or dephlogisticated nitrous air, and its respiration. This contained the first suggestion that nitrous oxide might have utility in surgery: ’as nitrous oxide in its extensive operation appears capable of destroying physical pain, it may probably be used with great advantage during surgical operations.’ However, the growing notoriety of the Institution - and the association of the gas with the strange activities of those who took it - completely obliterated this positive suggestion. 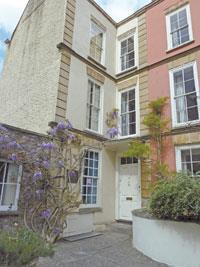 6 Dowry Square, Bristol, the original site of the Pneumatic Institution

Davy moved to the Royal Institution in 1801 and began other research, most notably his experiments with electricity and electrolysis. These led ultimately to his isolation of the elements sodium, potassium, calcium, barium, magnesium and strontium. in 1807-8 Beddoes struggled on alone until his death in 1808, concerning himself more and more with what he called ’imperfections and abuses in medicine.’

The Pneumatic Institution never recovered from the bad press it received at the turn of the 19th century. And while nitrous oxide became popular with audiences of the new music halls and at ’laughing gas parties’, its potential medical benefits were not pursued.

It might have stayed this way if the US dentist Horace Wells had not tried it on his patients in December 1844. Even then, his initial success could not be reproduced when he tried to demonstrate the efficacy of the gas to the medical profession. It took another dentist, Gardner Quincy Colton to properly establish the utility of nitrous oxide, and with his associates he successfully treated more than 25,000 patients between 1863 and 1866.

Subsequently, the 50:50 mixture of nitrous oxide and oxygen (known as gas and air or Entonox) became especially popular in obstetrics - not least because it can be self-administered by the patient and produces powerful analgesia without loss of conciousness. The neuropharmacology of this analgesia - as well as the ability of the gas to produce euphoria and a relief of anxiety - are still poorly understood. It appears that nitrous oxide interacts with many of the neurotransmitter pathways, particularly those mediated by the N-methyl-d-aspartate (NMDA) receptors.

Finally, in dentistry, nitrous oxide has largely been superseded by the use of local anaesthetics together with benzodiazepines (including diazepam and lorazepam) which produce mild sedation coupled with amnesia. This makes tooth extraction an almost pleasurable experience, although not necessarily a laughing matter!