The periodic table has become something of a style icon while remaining indispensable to chemists. Over the years the table has had to change to accommodate new elements. But some scientists propose giving the table a makeover while others call for drastic changes to its core structure. 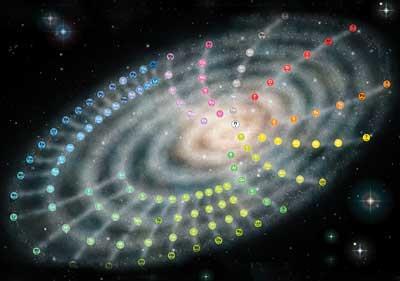 More than 1000 periodic systems have been published since the Russian chemist Dimitri Mendeleev developed the mature periodic system - the most fundamental natural system of classification ever devised. (Not to mention the hundreds if not thousands of new systems that have appeared since the advent of the internet.)

Such a proliferation prompts questions as to whether some tables are more valid than others and even whether there might be one optimal periodic system which best reflects the relationship between the chemical elements.

The underlying science embodied by the periodic system is deceptively simple. If the elements are placed in a natural sequence according to increasing atomic number there appears to be an uncanny repetition in their properties, albeit an approximate one.

Using atomic number the elements can be arranged into a one-dimensional sequence, which is the precursor for any periodic system.

But the periodic table is a two-dimensional display of the elements. It cuts the sequence at particular places in order to reflect the chemical similarities of elements. The resulting strips can be pasted, one underneath the other, to display the approximate chemical recurrences as vertical columns or groups.

The notion of chemical reactivity is something of a vague one. To make this idea more precise, the periodic table pioneers focused on the maximum valence of each element and looked for similarities among these quantities (see Mendeleev’s table, p48).

The method works very well for the elements up to atomic weight 55 (manganese) after which point it starts to fall apart. Although there seems to be a repetition in the highest valence of aluminium and scandium (3), silicon and titanium (4), phosphorus and vanadium (5), and chlorine and manganese (7), this is not the case with potassium and iron. Whereas potassium shows a maximum valence of one, iron shows a maximum valence of three. It does not fit properly underneath potassium and nor do the next two elements, nickel and cobalt. But the following element, copper, does show a valence of one and two. 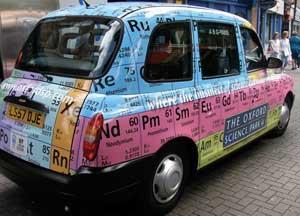 Ignoring the valence of two gives at least some reason for placing copper underneath potassium. Similarly, zinc fits perfectly underneath calcium since both elements show a maximum valence of two. 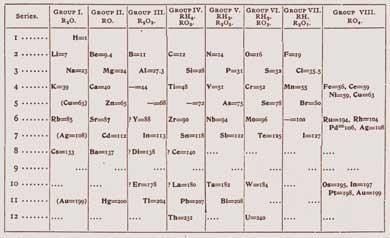 Mendeleev’s table of 1871 contained a new group of elements:

The question is what to do with iron, cobalt and nickel? Mendeleev solved this problem by creating an anomalous new group, or rather a group containing three elements in each place. He placed the new group, which he labelled VIII, to the right of the main body of his compact or so-called short-form periodic table. A similar situation occurs with ruthenium, rhodium and palladium, and later with osmium, iridium and platinum, which Mendeleev likewise expelled from the main body of the table and placed into the anomalous group. He called these ’transition elements’, because they represented transitions in the sequences of elements which showed similarities in their maximum valences, before such behaviour was taken up again as in the case of copper and zinc, silver and cadmium, and finally gold and mercury. 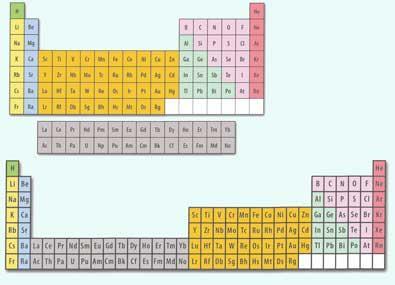 Today’s transition elements are not the same as Mendeleev’s - the sense in which they are ’transitional’ has changed. In order to appreciate this change we must consider the electronic configuration of atoms, none of which was known at the time of Mendeleev and his contemporaries.

An atom of potassium has a configuration of 1s2, 2s2, 2p6, 3s2, 3p6, 4s1 followed by calcium, which is 1s2, 2s2, 2p6, 3s2, 3p6, 4s2. But then something strange happens - the following 10 elements after calcium have a configuration involving the occupation of the 3d orbitals. It is only when this process is completed that subsequent atoms resume the filling of s and p orbitals.

And just as Mendeleev solved the problem by removing his transition elements from the main body of the table, so modern chemists and physicists solved their problem by removing a block of elements: the
d block. But instead of placing these new transition elements to the right of the main body of the table, they are traditionally placed between two unevenly separated portions of the main table, the s block and the p block.

In the 1940s, American chemist Glen Seaborg made a further modification to the periodic table, this time involving the inner transition elements called the actinides. As a result of his work these elements - which had previously been housed in the main body of the medium-
long-form table - were also removed to join the lanthanides and to create
the long-form periodic table
(see page 48). 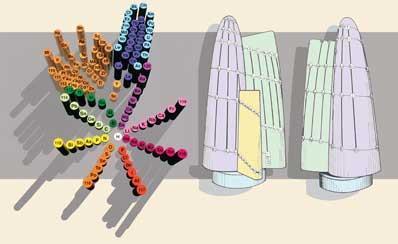 All these forms are still fairly traditional, although the act of removing elements from the main tables does not have to be carried out on a two-dimensional display. Today, several two and three-dimensional periodic systems have been devised in order to accommodate the transition metals in novel ways
(see above).

But there is still nothing drastic involved in these arrangements, despite their appearance. Tables with more significant variations place some elements in different groups. One such radical arrangement is the left-step periodic table in which helium is placed at the top of the alkaline earth metals rather than at the top of the noble gases.

An interesting debate has developed over which elements should be placed in group three of the conventional table. As long as the medium-long-form prevailed it appeared as though lanthanum and actinium were equally good candidates for membership to group three as were lutetium and lawrencium. But with the growing willingness to display the elements in a long-form table, the choice in favour of lutetium and lawrencium becomes inescapable. If one places lanthanum and actinium below scandium and yttrium in a long-form arrangement the sequence of atomic numbers is violated in a rather shocking manner.

Finally, it appears that the recent synthesis of super-heavy elements up to and including element 118, (with the exception of element 117), is reawakening an interest in how best to represent the periodic system.

With the possibly imminent advent of the g-block, formally starting at element 121, it will become necessary to create a new block in the table.

Should this be placed as a footnote to a long-form table or perhaps incorporated into a very-long-form table with 50 columns? Needless to say, several versions of both kinds can already be found - this is an issue that won’t be resolved in a hurry.

Eric Scerri teaches chemistry and history and philosophy of science at UCLA in Los Angeles, US. He is the author of   The periodic table, its story and its significance, Oxford University Press, 2007