Thinking about buying a chemistry set for someone this Christmas? A nostalgic look at an inspirational toy that could be on the verge of a comeback

Thinking about buying a chemistry set for someone this Christmas? A nostalgic look at an inspirational toy that could be on the verge of a comeback

Chemistry sets just aren’t what they used to be. The days of stinks in sinks and bangs in basements are well and truly gone, but are certainly not forgotten. Just take a look at the biographies of distinguished chemists: more often than not, their fond memories of childhood are strewn with broken glass, tinted with spectacular colours and reek of sulfurous smells.

A personal experience of chemical reactions is crucial to get children interested in science, argues author and neurologist Oliver Sacks, whose ’Uncle Tungsten’, the owner of a lightbulb factory, introduced him to the wonders of experimentation at an early age. ’I do not think that there can be any adequate substitute for having a chemistry set or a little chemistry lab and doing experiments oneself,’ says Sacks, ’thinking them out, taking responsibility for them and occasionally facing risks too.’ 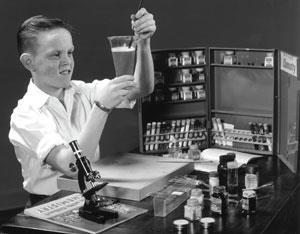 But in these safety-conscious and litigious times, this is far from easy. ’There are "chemistry sets" on sale today that simply don’t contain any chemicals,’ says Rosanne DiVernieri, Collections Coordinator at the Chemical Heritage Foundation in Philadelphia, US and curator of an ongoing exhibition on chemistry sets. There is just no comparison between modern sets and those from the 1940s and 1950s - the heyday of the chemistry set.

’Back then, children were experimenting with everything they could get their hands on, they were given free rein of their garages and basements and occasionally blew them up,’ she says. So popular was the chemistry set during this period set, that manufacturers frequently boasted there was one in ’every house on every street in America’.

The origin of this quintessentially 20th century phenomenon can be traced back to the chemical chest, a beautifully crafted and exorbitantly expensive piece of portable kit manufactured from the early 18th century onwards. At first, these chests, which held everything from complex glassware and ceramic vessels to pre-packaged chemical preparations and reagents, were aimed at a serious and seriously niche market: as one early manufacturer put it in 1730, ’to facilitate and promote the Practice of Chemistry by putting a commodious Laboratory into the hands of Gentlemen’.

But new markets soon emerged, with mineralogists, metallurgists and medical students all standing to benefit from this mobile, must-have laboratory. And as the price for a portable chest began to tumble, a new and impressionable kind of consumer stepped forward and dug a youthful hand into its pocket. 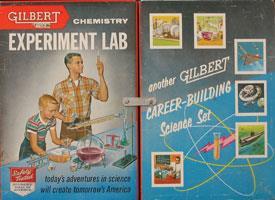 The first chemistry sets targeted exclusively at children appeared in the 1830s, says Salim Al-Gailani, a graduate historian of science at Cambridge University, UK. ’As soon as chemical manufacturers began marketing towards children they had to invent ways to make chemicals more appealing.’ A good way to do this was to draw on the Victorian obsession with magic, he says.

Chemistry and conjuring were so closely bound up that an 1881 copy of Boy’s Own Paper  went so far as to suggest that ’most so-called magical illusions are chemistry experiments,’ says Al-Gailani. With children desperate to make their own fireworks, experiment with disappearing inks and perform colour-changing tricks, publishers began to cash in. Towards the end of the century, a rash of handbooks, manuals and penny pamphlets appeared that taught children ’chemical magic’ of the sort taking place in the music halls around Britain, he says.

But the outbreak of the First World War took its toll on this kind of recreational chemistry, particularly in Europe. This might explain how two American companies - Porter Chemcraft and A C Gilbert - came to dominate the story of the chemistry set from around 1920 right up until 1960. Indeed, if you owned a set in this period, there’s a very good chance it was made by one or other of these manufacturers, says John Tyler, a retired science teacher, keen collector of chemistry sets and author of The Chemcraft Story: The Legacy of Harold Porter.

Both companies employed sophisticated marketing techniques to push their products on children and parents alike. ’Experimenter today, scientist tomorrow,’ promised Porter Chemcraft right up to the 1950s, when its slogan became even more aspirational: ’Porter Science prepares young America for world leadership.’ This shift is reflected in the images used on the boxes. Early on, most sets showed a stereotypical laboratory scene, often with a boy holding up a test tube. By the late 1950s, however, this domestic setting had been replaced by distant horizons, rocket ships and nuclear symbols.

Harold Porter set up clubs for the owners of Porter Chemcraft sets, giving members fancy certificates, sending out monthly newsletters and publishing experiments the children had designed, says Tyler. ’It was clever stuff.’ Alfred Carlton Gilbert, who became known as ’the man who saved Christmas’, also encouraged children to undertake their own experiments and in 1937 launched a $100 prize for the ’boy chemist of the year’.

This focus on boys is pretty typical of the early sets, says DiVernieri. ’They were almost exclusively aimed at young boys in an effort to get them interested in science,’ she says. Girls did eventually get their own dedicated sets in the late 1960s and early 1970s. But with pink packaging and contents that nudged girls towards careers as lab technicians rather than scientists, they were clearly products of their time.

As science began to contend with the sinister side of its image, chemistry sets fell from grace. ’A greater focus on safety and the emergence of environmental and anti-nuclear movements in the 1960s, caused people to question whether free-range science should be marketed towards children,’ says DiVernieri.

The deaths of Gilbert and Harold Porter in 1961 and 1963, respectively, also had an impact. ’When the principals were gone, there was no real drive or direction to their companies,’ says Tyler. A series of high-profile lawsuits in the 1970s only made matters worse. In spite of safety warnings plastered all over the boxes, accidents were bound to happen. ’There was nothing dangerous about the chemicals themselves,’ says Tyler. ’It’s how they were used - put anything into a test-tube, stick a cork stopper on top, apply heat et voila  you’ve got a potential lawsuit.’

It’s hard to see how the chemistry set can return from this low point. ’Not in America,’ says Sacks, ’where there is a sort of nursery atmosphere, and a hysteria about risks and insurance.’ Conceivably, he says, a virtual set courtesy of the internet or a ’nano set’ containing minute quantities of reagents could give children a safe introduction to chemistry. ’But if chemistry sets or something equivalent cannot come back, a certain realm of childhood may be lost forever.’

DiVernieri is more upbeat. ’We’re going to see a resurgence of the kind of sets produced in the 1950s,’ she predicts. ’With the rise of home-schooling and the emergence of alternative schools, particularly in the US, more and more people will demand sets that can be used at home, but that don’t [disadvantage] their children when it comes to science education.’ If chemistry sets are about to reinvent themselves for the 21st century, they will almost certainly be coupled up with some kind of web-based interactive element, she suggests. Let’s hope she’s right.

Henry Nicholls is a science writer based in London, UK

’It was the greatest puzzle that sodium, this flammable and malleable metal, and chlorine, this extremely reactive gas, formed innocent table salt. To check this out, I bought a piece of sodium, burned it in chlorine gas, and re-crystalised the precipitate. It was a white powder which I poured over a big slice of bread and it was table salt indeed, the best kind.’

’It was at the age of nine or ten that I was given a chemistry set. I am a great believer in chemistry sets..There was the magic of colour changes and bangs.. We chemists, aged 10, used to make our own fireworks. But you can’t do that now.’

’When I was 11 years old my mother bought me one of those chemistry sets and I stayed with it. I discovered that I could buy additional apparatus and chemicals using my father’s privilege at the drug store. I began building up a home laboratory.’

’My interest in the sciences started with mathematics in the very beginning, and later with chemistry in early high school and the proverbial home chemistry set.’

’Something about tubes filled with things with exotic names intrigued me. My objective with that set was to figure out what things I might put together to cause an explosion. I discovered that whatever chemicals might be missing from the set could be bought at the local drugstore. .We could go down to the hardware store and buy 100 feet of dynamite fuse, and the clerk would just smile and say, "What are you kids going to do? Blow up the bank?"’

’I still remember my excitement when I first glanced at paramecia and amoebae through a rather primitive toy microscope. I then converted a bathroom, seldom used by the family, into a laboratory and spent hours playing with chemistry sets.’

’When I was nine years old, my parents gave me a chemistry set. Within a week, I had decided to become a chemist and never wavered from that choice.’

’I really got a kick out of growing crystals. That did seem quite magical. However my main memory is of distilling formaldehyde with a school friend. The pungent aroma got in our eyes and had us running out into the back yard.’

’I received a chemistry set when I was about 10. I remember playing with it in the basement of my parents’ house and it may have interested me more than I realised.’

’I set up some scientific experiments at home in my room. I had some test tubes and would heat some substances, such as wood in them. I could have created an explosion, but I didn’t-I was lucky. I was intrigued by these experiments, especially when observing the substance changing from solid to a burning gas.’

’My older brother Theodore.presented me with the proverbial chemistry set on my eighth birthday..I was hooked. I created a small laboratory at the end of a storage area for canned goods and used my budding woodworking skills to build shelves for the ever expanding collection of test-tubes, beakers, and flasks.’