Signs of water on Enceladus

The idea that liquid water exists below the surface of one of Saturn’s moons has been given a boost thanks to researchers in the US and China who have detected ammonia, various organic compounds, and possibly argon in plumes of gas and ice particles that spew out of the moon’s south pole.

The work should help scientists further understand the formation of this and other planetary bodies and keeps hope alive that Enceladus, Saturn’s sixth largest moon, might have the necessary components to support extraterrestrial life. 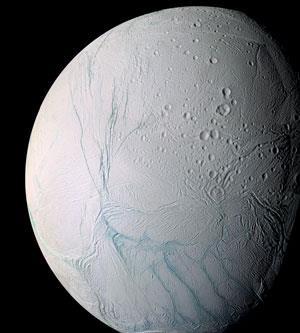 Enceladus is one of over 50 moons orbiting Saturn

When plumes of ice water were first observed erupting from Enceladus by NASA’s Cassini spacecraft in 2005, scientists immediately began to wonder if they were being propelled by liquid water present in the moon’s interior. Now, Jack Hunter Waite Jr and colleagues from the Southwest Research Institute in San Antonio, US, and a number of other institutions in the US and Taiwan have added to mounting evidence in support of this theory by analysing INMS (ion neutral mass spectrometer) data on the plumes’ gas constituents obtained from a recent Cassini flyby.

’Our evidence [for liquid water] comes from the detection of ammonia which acts as an antifreeze and can lower the melting point of water ice,’ explains Jonathan Lunine, one of the paper’s co-authors and a planetary scientist at the University of Arizona in Tucson, US.

Moreover, the team believe their analysis points to an abundance of an isotope of argon (40Ar) in the plumes. The most plausible explanation for its presence, they say, is that a fluid must be leaching either the 40Ar or its parent potassium out of the rock deep inside Enceladus’ interior. ’Ice doesn’t do that so it really should be liquid,’ adds Lunine.

Last month, German scientists, led by Frank Postberg from the University of Heidelberg, put forward strong evidence for subsurface liquid water by publishing their discovery of sodium salts in Saturn’s outer-most ring which is thought to originate from Enceladus’ plume material. ’The two studies are complimentary and now, for the first time, we are getting an idea of the full picture of what’s happening on Enceladus,’ says Postberg.

Also excited about the new findings is Dave Stegman from the University of Melbourne in Australia, who has previously hypothesised the presence of ammonia and liquid water on Enceladus based on dynamic modelling work. ’Certainly, the discovery of ammonia will help influence what scientists consider to be a viable model for Enceladus,’ he says.

The latest study is also important for its discovery of diverse organic molecules detected in the plumes. ’Their presence indicates that chemistry is going on in the interior,’ says Lunine. What’s more, finding these organic molecules adds to the possibility that Enceladus may have the right conditions for life to exist. ’This work helps build the case that the components for life are there - heat, liquid, some organic compounds, and chemical gradients,’ adds Stegman.