A library of model oligomers has been synthesised by chemists in the UK and Colombia in order to better understand the behaviour of polyfluorene light-emitting polymers.

Many modern displays, such as you might find on your stereo or mobile phone, are based on organic light-emitting polymers (LEPs). Efficient and stable red and green emitting polymers have been known for some time, but blue emitters are a problem. 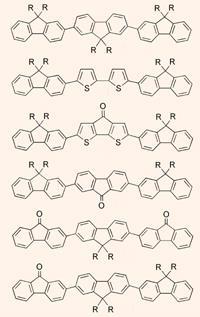 Blue polymers are engineered to produce higher energy photons than their red or green counterparts, and they tend to be harder to synthesise and less stable. Franklin Jaramillo-Isaza from the University of Antioquia in Colombia and Michael Turner from the University of Manchester, UK, have collaborated to produce a set of model LEPs which will help in the design of better blue polymers.

One of the most promising blue polymers is polyfluorene, which can be used straight from solution and easily made into high quality thin films of the sort needed for organic light-emitting diodes (OLEDs). Unless the material is very pure, however, OLEDs made from polyfluorene degrade very quickly and their emission changes irreversibly from blue to green.

Researchers now know why this happens - impurities quickly form in the polymer when an electric field is applied to it - but as polymers are quite large and complicated materials it took several years before the reason could be pinned down.

Jaramillo-Isaza and Turner have synthesised a library of much shorter polymer chains - oligomers only three units long, whose building blocks are monomers of fluorene, fluorenone (the main impurity in fluorene polymers) and thiophene, another material used to make LEPs. Because they are such short and simple materials, this library will be a very useful tool for modelling LEPs in order to better understand how they work and why, and for designing the next generation of blue materials.