Coffee is the number one source of antioxidants in the US diet, claim analysts.

Coffee is the number one source of antioxidants in the US diet, claim analysts.

Joe Vinson and colleagues at the University of Scranton, US, analysed the total polyphenol content of more than 100 food items and used consumption data from the US Department of Agriculture to calculate the average per capita antioxidant intake. 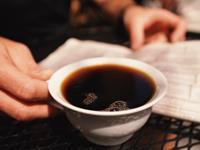 Coffee far outranked other sources of antioxidants, on the basis of levels per serving combined with the amount consumed. It is followed by tea, bananas, dried beans and corn.

In terms of total polyphenol levels by serving size alone, coffee was second, behind dates, and followed by tea, dark chocolate and dried beans.

Vinson also found that two thirds of the antioxidants in the US diet came from drinks, while nuts provided 15 per cent, vegetables 10 per cent and fruit seven per cent.

Existing US databases underestimate the antioxidants in food because they are based on the analysis of selected compounds. This work looks at total polyphenols, including those phenolic groups that are bound to sugars and fatty acids, said Vinson, speaking at the American Chemical Society’s national meeting in Washington DC.

’We were the first to put content and consumption data together,’ he said.

Very few of the polyphenols get absorbed by the body, but they are important because they may be responsible for some of the health benefits that have been attributed to vitamins, he said.

The next step is to measure the effect of the polyphenols. ’It is easy to do analysis, but you have to go to the next level for proof - animal models of disease, and humans - to see whether there is a correlation between levels of these things and some biochemical effect, for instance does it affect your blood pressure.’