Scientists from the US have made a computational model of the formation of breast acini, the sac-like part of the milk-producing glands, to understand complex events occurring during the progression of breast cancer.

Jonathan Tang from the University of California, Berkeley, and colleagues, made a 3D model of acini formation, for the first time, to study how three different cell activities - apoptosis (programmed cell death), proliferation (cell division) and polarisation (organisation of cell components) - work together to form the tissue. In doing so, they hoped to determine how changes to these activities cause cancer.

’We believed that such a model would enable us to identify which perturbations cause disorganised structures that resemble tumours, giving us a deeper insight into the complex nature of cancer,’ says Tang.

The team set up an in vitro model to replicate what happens to normal cells when they form acini. Then they used the model to determine the changes required to replicate the growth of cells of a common type of breast cancer called ductal carcinoma in situ, by decreasing apoptosis and increasing cell proliferation. They found that the abnormal cells had very large structures with low cell densities. The speed of the growth indicates that the acini structure grew much faster than the cells comprising it, says Tang. 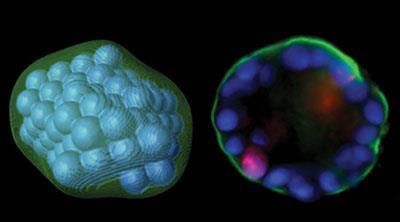 ’Our computational model could not replicate this behaviour using any combination of parameters for proliferation, apoptosis and polarisation, contradicting the current theory that ductal carcinoma in situ is the result of only high proliferation and low apoptosis. Instead, our model suggests that other mechanisms must be at play,’ explains Tang.

The simulations suggest that an excess of a protein called AKT-1, which inhibits apoptosis, must also disturb cell-cell and cell-extracellular matrix (tissue that provides structural support to cells) communication, reminding us that extracellular context can dictate cellular behaviour, he adds.

’We have the ability to measure one signalling event at a time, but we don’t have the ability to understand how multiple complex signalling events are integrated and how they interact. So I think there’s a lot of promise for this kind of work,’ says Catherine Park, an expert on the treatment of breast cancer from the University of California, San Francisco, in the US. She adds that she hasn’t seen anything like this before, especially in three-dimensional models. ’Work on two-dimensional tissue cultures has been done, but signalling and phenotypes are very different when you put cells into a physiologically relevant context,’ she concludes.