US researchers have developed a mouse model of Parkinson’s disease and used it to generate the most compelling evidence yet that amphetamines, including Ecstasy, can reverse symptoms of the disease. 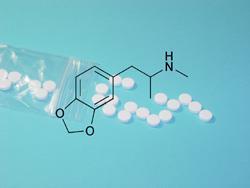 A man with Parkinson’s disease reported, four years ago, that taking Ecstasy (MDMA) gave him relief from his symptoms. Experiments showing that Ecstasy alone was sufficient to unfreeze this patient’s limbs were also a revelation to the scientific community, and the start of fresh investigation into the neurochemistry of the disease.

Parkinson’s disease is characterised by degeneration of neurons in the region of the brain that controls movement. This leads to a shortage of the brain chemical dopamine. Current treatments involve boosting dopamine levels with L-DOPA drugs.

Ecstasy has no effect on dopamine levels, but releases significant amounts of a different neurotransmitter, serotonin, into the brain. Serotonin is behind the euphoric effects of Ecstasy, but exactly how it restores movement is unknown.

There is still a lot to learn about neurotransmitters, says Raul Gainetdinov, assistant professor at Duke University Medical Center in Durham, North Carolina, whose team is studying the phenomenon.

Gainetdinov suggests that the antiparkinsonian effect of amphetamines may not be down to dopamine or serotonin, but rather to endogeneous substances called trace amines that are structurally related to dopamine.  ’Recent evidence suggests that MDMA and amphetamines can bind to trace amine receptors with unknown functional consequences,’ he  told Chemistry World.

The study’s lead author, Tatyana Sotnikova, said: ’the findings suggest that Ecstasy can improve movement control independently of dopamine and, importantly, provide evidence that drug activation of other neural pathways may be sufficient to restore movement even in the virtual absence of dopamine neurotransmission.’

The mice used in the study lack detectable brain levels of dopamine, and exhibit Parkinson’s type symptoms. ’The model is exciting because it allows us to examine the potential contribution of systems other than dopamine to Parkinson’s disease,’ said team member Marc Caron, professor of cell biology at Duke University Medical Center.

’We may be able to discover avenues for treatment that had never been thought about before or that were impossible to investigate,’ said Caron. The mice will provide a valuable test bed for potential therapeutic drugs.

L-DOPA can produce unwanted side effects including uncontrolled movements known as diskinesias in the later stages of Parkinson’s disease. The researchers found that lower L-DOPA doses might be effective if combined with amphetamines.

Patients with Parkinson’s disease should not reach for amphetamines, caution the Duke team, but rather wait for synthetic chemists to develop related, but safer, alternatives. Helen Carmichael