Engineers have developed a way to produce hydrogen for fuel cells to recharge batteries in portable electronics, such as laptops.

Engineers have developed a way to produce hydrogen for fuel cells to recharge batteries in portable electronics, such as laptops. 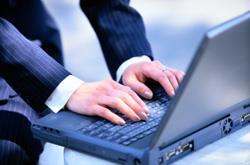 The technique combines two previously known methods for producing hydrogen. Each has limitations, making it impractical when used alone, but these are overcome when the methods are combined.

One of the methods produces hydrogen by combining sodium borohydride with water and a catalyst. However, expensive catalysts such as ruthenium are needed. The other method uses combustion of nanoscale aluminium with gelled water. The drawback with this is that not enough hydrogen is produced to be practical for fuel cell applications.

Arvind Varma and colleagues at Purdue University, US, have combined both methods using a triple borohydride metal-water mixture. This system does not need a catalyst because the energy for the reaction comes from the aluminium combustion. It also has a high enough yield to make it promising for fuel cell applications.

’We can convert 6.7 per cent of the mixture to hydrogen which means that for every 100g of mixture we can produce 7g of hydrogen,’ said Varma, ’that yield is better than alternatives on the market.’

Varma envisages a system that will have a credit card-sized, disposable cartridge with 20-25 pellets. When a battery runs down below a certain threshold, an electrical wire from the battery ignites the pellet. This would release the right amount of hydrogen to power the fuel cell to recharge the battery to full power. Byproducts from the reaction are environmentally benign and can be disposed of or recycled.

The team is continuing to optimise the process. The researchers are looking into different materials, such as magnesium instead of aluminium, and other borohydrides that have a higher hydrogen content, such as lithium borohydride, instead of sodium borohydride. They aim to reach 8-10 per cent hydrogen yield which, they say, will make it possible to develop hydrogen fuel cell systems with better energy and power characteristics than direct methanol fuel cells.

In parallel with this research, the team is developing a prototype including fuel cartridge, igniter and fuel cell. Varma expects to have a functional fuel cell unit in six months and anticipate it to take a year or more to develop the cartridges.

The work, presented at the American Chemical Society national meeting in Washington, DC, interested researchers, including Tom Autrey, senior research scientist at the Pacific Northwest National Laboratory, and investors. Decisions on funding a start-up company will be made by the end of September. The company will be run by a chief executive chosen by the investor. ’We will be advisers,’ said Varma, ’we want to continue with research’.