A solution to a sticky problem

New sealants for closing up wounds during hospital operations have been developed by scientists in Australia, which have been shown to be stickier, safer and easier to manipulate than current sealants.

Surgical sealants are applied over tissue surfaces to prevent air leaks after lung operations or fluid leaks from the spine after a spinal operation. These leaks can cause complications, resulting in greater postoperative pain, longer hospital stays and increased mortality. Currently used natural sealants, such as fibrin and collagen, could be contaminated with blood-borne viruses, for example, hepatitis B or HIV. As such, synthetic sealants have been considered a safer alternative. Although synthetic sealants exist, there is a need for one that is safe, flexible and easy to use.

Qizhi Chen at Monash University, Clayton, and coworkers have made a family of synthetic sealants from poly(glycerol sebacate) (PGS) and lactic acid (LA) that possess these properties. The PGS-co-LA sealants were synthesised by polycondensation of glycerol, sebacic acid and lactic acid, after which the team discovered that the polymers were exceptionally sticky. In fact, the polymers are more adhesive than fibrin sealants and a commonly used synthetic sealant. In addition, they can be applied as a liquid at 45 degrees Celsius and they solidify to form a flexible patch. This prevents the sealant sticking straight away - a problem with current sealants - giving the surgeon time to get the material in the correct position before it sets. 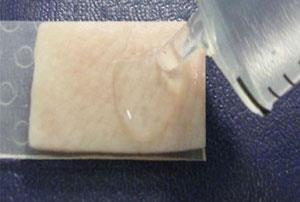 The sealants have high adhesive strength and can be pasted as a liquid, making them easy to manipulate during an operation

Brian Amsden, an expert in biodegradable and biocompatible polymers for use in biomedical applications at Queen’s University, Canada, states that although this is an interesting approach to this problem, ’the group hasn’t tested the approach in a live situation where there will be blood and exudates. The presence of the blood may interfere with effective bonding of the polymer to the underlying tissue.’

Chen and coworkers are looking for clinical partners for animal trials and expect to face challenges regarding controllable biodegradability. ’To tailor the degradation rate of sealants to match specific clinical applications remains a challenge,’ says Chen. However, the PGS-co-LA system is a promising candidate as a soft tissue sealant and ’in the future it may replace current, expensive fibrin sealants,’ he adds.