A torch to fit in your back pocket

In a real life display of the use of photovoltaics, a solar powered torch the size of a credit card has been developed by a team of scientists from Denmark, the Netherlands and the US.

Organic and polymer solar cells (OPV) have reached a technological level where they can be produced commercially using roll-to-roll methods that are cost effective. Frederik Krebs, from the Technical University of Denmark, Roskilde, and colleagues have made a new device that combines 16 solar cells connected in series that are used to charge a battery that powers a white light emitting diode. 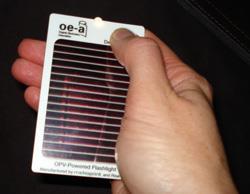 Production required 35 steps, and combined the polymer solar cell with printed circuitry and flexible lithium polymer batteries. Tests were run on the lamp to determine its efficiency and study the effects of humidity and design on performance.

This new pocket-sized flashlight was able to get a yield of 89 per cent and operated for hours at a time. Krebs explains: ’Even if the flashlight is far from solving the world’s energy problem, it clearly demonstrates that polymer solar cells are capable of fairing outside the laboratory and can be made available to the public in an operational device.’

Until now, very few examples have been manufactured beyond a few units. This is the first time that a complex device has been commercialised at this scale - 10,000 units have already been made. Examples were even handed out at the most recent Large area Organic and Printed Electronics Conference (LOPE-C).

’While the OPV powered lamp demonstrated in this work shows how this technology can be used in regions of the world where direct access to electricity by conventional sources is difficult, the methods developed will have a broader impact in the field of printable organic electronics in general,’ comments John Reynolds, an expert in conducting polymers from the University of Florida, US.

Krebs and his team are now tackling the next challenge, which is to make polymer solar cells with longer operational lifespans capable of working for years at a time in outdoor conditions.