A uniform junction for uniform nanotubes

Scientists have made a uniform junction unit for branched carbon nanotubes 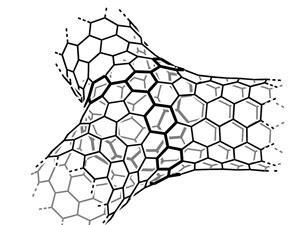 The junction is a strained, conjugated carbon nanocage. Strained cages are rare and forming strained hydrocarbon cages consisting of sp2 and/or sp-hybridised carbons such as this is a formidable task, said the researchers.

Kenichiro Itami from Nagoya University, and colleagues, made their all-benzene nanocage because branched nanotubes are attracting attention as potential small logic gates or transistors.

The team started with an assembly of cyclohexane-based L-shaped units and benzene-based three-way units by cross-coupling and homocoupling to give an unstrained cyclic precursor. Then, they converted this into the strained nanocage by acid-mediated aromatisation.

Physical studies on the cage revealed a high fluorescence quantum yield (efficiency of fluorescence; ratio of the number of photons emitted to the number of photons absorbed) and a relatively large two-photon absorption cross section (an optical process in which two photons of identical or different frequencies are absorbed to excite a molecule from one state, usually the ground state, to a higher energy electronic state).

Itami’s team now plans to explore applications for the nanocage, such as in optoelectronics and host–guest chemistry. ‘We are now in a position to initiate the bottom-up synthesis of branched carbon nanotubes using the junction unit and a sidewall unit as key components,’ they said.