Mifepristone prevents the development of tumours in mouse mammary cells

The active ingredient of the abortion pill - mifepristone, or RU-486 - prevents the formation of mammary-cell tumours in mice with a mutation in the breast cancer susceptibility gene, BRCA1, report scientists in California. The study might lead to new therapies for the prevention of breast cancer in women with mutations in BRCA1. Normally, the BRCA1 protein plays a role in DNA repair and tumour suppression in breast and ovarian tissues by interacting with hormone receptors.

Now, Eva Lee and colleagues at the University of California, Irvine, have shown that BRCA1 promotes the degradation of the receptors for progesterone, a hormone that promotes cell proliferation in the mammary glands of rodents and humans and plays an important role in pregnancy and menstruation. 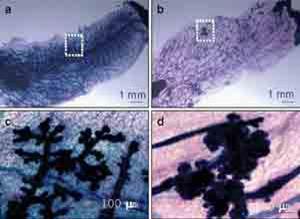 Mammary glands from mutant mice used as models for breast cancer. Panels (b) and (d) show tissue from mice treated with the progesterone-blocking drug mifepristone and panels (a) and (c) show tissue from control mice. The drug inhibited mammary tumour development.

To test whether or not the action of progesterone and the development of tumours can be blocked, Lee’s team treated the mutant mice with mifepristone, a drug that competes with progesterone for receptors. In untreated or placebo treated mice, tumours had formed by the time the mice were eight months old. But in animals treated with the morning after pill, no tumours were detectable even at 12 months.

In women who carry a mutated BRCA1 gene, one of the common, extreme, methods for preventing the development of cancer is surgery to remove the breasts or ovaries. Lee hopes that clinical trials of progesterone antagonists will give at risk women a new choice for preventing breast and ovarian cancers.

’In the future, antiprogesterone therapy may provide an option other than removal of the breast,’ said Lee.

The findings do have potential clinical implications, agreed Eliot Rosen, a molecular biologist at Georgetown University, Washington DC, US.  ’Although the mouse model doesn’t exactly mimic human BRCA1 cancers,’ he told Chemistry World, ’these findings suggest that you could prevent breast cancer from developing in women with BRCA1 mutations by treating with a progesterone antagonist.’

Nevertheless, warned Rosen, ’Clinical trials are a far leap from these studies.’

This article was originally entitled  Morning-after pill might prevent breast cancer. Many thanks to readers for pointing out that the morning-after pill and the abortion pill are quite distinct.