The number of pharma patents being filed by universities around the world is soaring compared with those coming from industry, according to a report from Thomson Reuters, The changing role of chemistry in drug discovery. While industry still files nearly five times as many patents as universities, in the past five years the gap has narrowed, with academic pharma patents more than trebling, from 602 in 2005 to 2025 in 2010. For industry, it’s just over doubled in that same timeframe, from 4135 to 9187.

’This seems to show that [industry] is patenting more than ever in efforts to protect its intellectual property developments, but also academia is waking up to the need to protect itself, and raise its ability to generate revenue streams,’ the report claims. 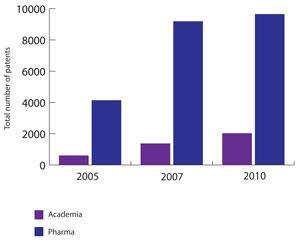 It indicates the growing role of academia in drug discovery, and industry’s priorities. In one therapeutic area, infection, which is now less of a priority for industry, more than a third of the 600-plus filed patents in 2010 came out of universities. In contrast, just 16 per cent of the 2010 patents in cardiovascular disease were from academics.

Another report, Patenting in the UK from Patanalyse, reinforces this finding. It claims that the universities’ emphasis on biopharma is ’most likely related to the active financing of life science activities by government and government agencies’. The report states that industry still spends significantly more per patent than academia with the UK R&D spend per patent in pharma companies about 16 times higher than most other industrial sectors, with a notional R&D spend per patent of around ?32 million. A drug may be supported by only a few patents, whereas more complex products like mobile phones are underpinned by many more and development costs are much higher in pharma, bumping the per-patent figure up significantly.

The Thomson Reuters report also claims that industry productivity has declined dramatically over the past decade, with both R&D costs and time-to-market rising. While pharma product sales have risen by almost 250 per cent and R&D spend is up by more than 150 per cent, time-to-market has risen more than 20 per cent, and the output of new drugs is down 65 per cent. The result is put down to site closures, restructuring and consolidation that have characterised the past few years.

One growing area is repurposed drugs - products already on the market for one disease being developed for another. There were 80 of these in 2001; by 2010, there were 222. This strategy is particularly common for orphan (rare) diseases as many of the ’big’ diseases are well served by cheap generic medicines.

As David Leahy, chief executive of Molplex, says in the report, the era of ’big products’ is over, and while orphan drugs offer much smaller returns individually, it all adds up. ’We will see more drugs that offer smaller advances and smaller but numerous markets, more niches in terms of disease and population,’ he says. ’There will be more $50-200 million (?31-127 million) a year targets, and hopefully there will be a lot more of them as the industry has got to grow.’