Brendan Abrahams and his team from the University of Melbourne, Australia, were surprised to find that alkali metal cations prefer to surround themselves entirely with aromatic systems, despite being created in an aqueous solution.

Hydrogen bonding holds the two shells together to form the clam-like structure. The shells are anionic with the cations forming the ’flesh’ inside. ’It seems to be a really nice match inside the clam-like structure between the cation and the electron-rich cavity provided by the aromatic surfaces. It was a surprise to us that a metal ion would do that,’ says Abrahams. 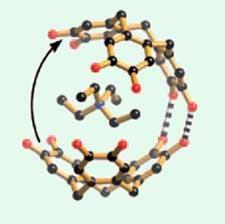 They found that Rb+ and Cs+ were the right size to fit inside the clam. No clam formed when they used the smaller K+ cation, and with larger cations the clam shells opened up. With the larger cations the clam hinge was just a single, or pair, of hydrogen bonds. The fact that the clam still forms even when the hydrogen bonding is disrupted by the larger ions shows the importance of the electrostatic attraction between host and guest.

The researchers made the discovery while making molecular building blocks for coordination polymers and oligomers linked with metal ions. This work has produced some tetrahedral and other large molecules.

Although the researchers haven’t come up with any direct applications for their discovery yet, Abrahams is optimistic about where future research will take them, saying ’who knows what this might lead to’. But for the time being, he says it is just a chemical curiosity.