Scientists in France studying a local deposit of 55 million-year-old amber have unexpectedly isolated a natural product never seen before. Akino Jossang and colleagues suggest the compound’s precursor came from an ancient tree related to a species now found only in the Amazon rainforest - indicating Paris once enjoyed a rather more tropical climate than it does today.

The team, from the National Museum of Natural History in Paris, were trying to trace the source of the tree resin that fossilised to form the amber - discovered in the Oise river area of the Paris basin in 1997. As part of these studies, Jossang powdered some of the amber and extracted it with solvent - isolating the new compound, which the team has named ’quesnoin’.

’It is very difficult to isolate pure known compounds in amber, so to discover a new structure was unexpected and exceptional,’ Jossang told Chemistry World. 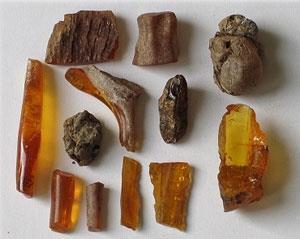 The amber from the Oise river deposit near Paris

The new compound is a member of the diterpene group of natural products, a family which also includes the gibberellin plant hormones and other related structures found in today’s plants. While the left hand portion of the molecule has the same structure as many other diterpenes, the right side of the molecule consists of a novel ring structure, bridged by a single oxygen atom.

’This is a structure I’ve not seen before, it’s truly very different,’ said Lew Mander, who studies diterpenes at the Australian National University in Canberra.

By analysing the possible mechanisms by which quesnoin formed, Jossang claims that the most likely chemical precursor of quesnoin is a known natural product called isoozic acid. This compound is today found in Amazon rainforest tree Hymenaea oblongifolia - suggesting that the tree which produced the amber was a tropical one, said Jossang. According to plate tectonics theory, 55 million years ago the land mass that now forms France would have been in the tropical zone. 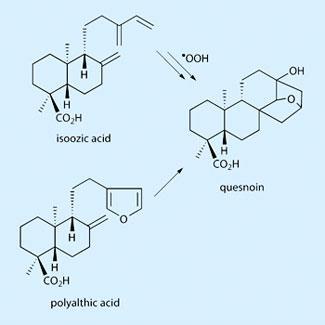 But Mander is not convinced that quesnoin forms from isoozic acid, pointing out a mechanistic error in Jossang’s proposal that the oxygen bridge forms by attack of a peroxy radical. Mander suggested instead that other known compounds, which already incorporate the key oxygen atom in the form of a furan ring, were more likely precursors. ’Starting from a furan precursor (such as polyalthic acid) gets you to quesnoin much more directly - which, applying Occam’s razor, would be much more plausible,’ he said.

Whatever the source of the bridging oxygen atom, the molecular rearrangement to form quesnoin would have to have proceeded via a highly strained intermediate. ’Quesnion may only have formed because it was entombed in resin for a very long time, and exposed to high temperatures and pressures - which would explain why it has never been isolated from a contemporary plant,’ said Mander.