Amino acid synthesis hints at how the genetic code expanded

The detailed pathway for the biosynthesis of pyrrolysine - the 22nd and latest amino acid to be discovered - has been outlined by US researchers. The results show that each pyrrolysine is made from two lysine precursors, pointing towards a route by which new amino acids could have been introduced into the genetic code during evolution.

There are 20 common amino acids that are widely recognised as making up all proteins. These are known as the canonical amino acids. But protein synthesis is more flexible than we once thought. And while synthetic biologists have realised it is possible to expand the language of the genetic code by introducing amino acids of their own design, we are still - albeit infrequently - coming across rare but completely natural amino acids beyond the canonical 20. Pyrrolysine is the latest, discovered a decade ago in methane-producing archaea (ancient microbial lifeforms).

Until now, pyrrolysine remained the only natural amino acid for which there was no established biosynthetic pathway. But Joseph Krzycki and colleagues at Ohio State University in Ohio have revealed that pyrrolysine is made by combining two molecules of the canonical amino acid lysine - a result Krzycki didn’t expect. ’We had a discussion about a week before we actually observed it that theoretically it would be possible,’ he says. ’But we never predicted it in any papers. So that was a bit of a surprise. I stared at that for about an hour before I realised it was actually what I’d said the week before.’ 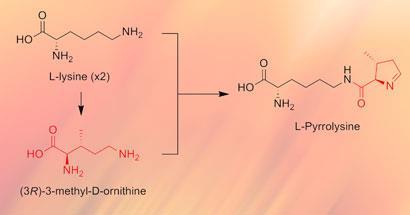 Krzycki’s team transferred genes for pyrrolysine production from archaea into Escherichia coli bacteria  and then used stable isotope labelling and mass spectrometry to trace the path of ’heavy’ lysine precursors. They saw that the bacteria incorporated the heavier carbon (13C) and nitrogen (15N) isotopes to form heavy pyrrolysine. Their results also indicated that lysine was most likely converted to pyrrolysine via an ornithine derivative, in reactions catalysed by enzymes encoded in the gene cluster they had introduced.

According to Krzycki, the pathway his team uncovered fits with the so-called coevolutionary theory for how the genetic code evolved. Under this theory, there were only a few amino acids to begin with, but new amino acids could be synthesised from existing ones. ’This would kind of fit with that - that pyrrolysine is now coming from lysine and lysine is derived from aspartate,’ he says.