Chemists in the UK and India have developed a simple, one step synthesis of gold nanoparticles incorporating an antibiotic, without using any other chemicals. The particles make the antibiotic more stable and could overcome some types of bacterial resistance.

Speaking at the American Chemical Society national meeting in Boston, US, Carole Perry from Nottingham Trent University described how her team discovered that the beta-lactam antibiotic cefaclor can be used to control the synthesis of gold nanoparticles.

Perry explains that the process gets around several problems with other methods used to attach antibiotics to metal nanoparticles. ’When you buy or make nanoparticles, you end up with (often toxic) chemicals on the particle surfaces,’ she says. ’These have to be removed, then you need to find some way to attach the antibiotic to the surface, which usually involves further chemical modification steps.’

The team’s method is very simple, requiring no fancy equipment: ’All you need is a balance to weigh out the components,’ Perry says. The particles are made by simply mixing a gold salt with cefaclor in water between room temperature and 70?C and stirring for a few minutes or hours. Although the team have not fully investigated exactly how cefaclor transforms the gold ions into gold metal, Perry believes that the free amine group on cefaclor is responsible for the metal reduction. 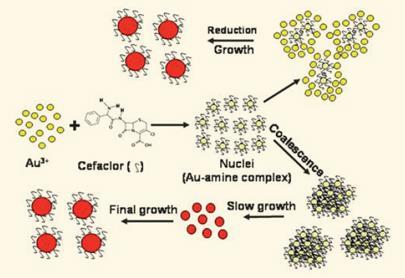 There are two possible ways to synthesise the antimicrobial gold nanoparticles. The resulting particles could be useful in overcoming some kinds of bacterial resistance

Beta-lactam antibiotics like the penicillins and cephalosporins disrupt bacterial cell wall formation, but many strains of bacteria have developed resistance. Perry explains that the nanoparticles could overcome some of those resistance mechanisms by delivering a concentrated dose of cefaclor. The cell wall is then disrupted before the cefaclor can be broken down by the cells defensive enzymes. This then allows the nanoparticle to get inside the cell, where the gold can interfere with DNA replication.

’This synergy between the gold and a conventional antibiotic is very interesting,’ says Ramanathan Nagarajan, who develops antibacterial textiles at the US Army Natick Soldier Research, Development and Engineering Center in Massachusetts, US. ’Classically people have used silver for a lot of antimicrobial applications, so it could be interesting to develop something that has different advantages compared to silver systems.’

Perry is enthusiastic about the scope of the discovery: ’Many other antibiotics have free amines that could work in the same way,’ she says, ’and it could be useful for people designing new antibiotics to incorporate into the design process.’ She adds that the extra stability of the gold-supported cefaclor has allowed the team to investigate applications such as sticking the particles to surfaces, with a view to using them in hospitals or wound dressings.