Antioxidants don’t always protect us from cancer, US researchers have shown. Some tumour cells can actually use antioxidants to protect themselves from natural cellular defence mechanisms, enabling them to survive and proliferate. The study provides insight into the altered metabolism of tumour-forming cells and could help improve current treatments.

Joan Brugge and her group from Harvard Medical School in Boston, US, were investigating changes in breast cancer cells that allow them to survive without being attached to the normal extracellular matrix. They found that treating cells with vitamin E-like antioxidants blocked the usual programmed cell death cycles, allowing the cells to survive free from their usual scaffolding by switching their metabolism to use fatty acids rather than glucose as fuel.

Normal cells need to be attached to a matrix to function properly and even survive,’ explains Brugge. She adds that as potential tumour cells start to proliferate rapidly, they quickly run out of space to stay attached to the matrix, so have to find ways to dodge the normal mechanisms by which detached cells are programmed to die. One of the most common mechanisms of cell death is apoptosis (a kind of programmed cell suicide), but the team found that when they blocked the apoptosis pathways, the detached cells still died, which hinted at a major change in the metabolism of detached cells.

’We found that there was a severe reduction in ATP [adenosine triphosphate] in cells within 24 hours of detachment,’ says Brugge. Cells use ATP as an energy source, so it seemed that part of the reason detached cells were dying was that they were running out of energy. The principal source of ATP for cells is metabolism of glucose, and the team found that detached cells lose the ability to transport glucose through their cell membranes. ’We found that expressing a [cancer-causing] gene called ErbB2, which is altered in many human tumours, allows the cells to transport glucose even when they aren’t attached,’ says Brugge, which gives one possible route for cells to survive away from the matrix. 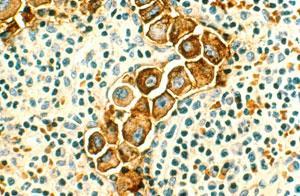 But, says Brugge, glucose is not just used for energy generation; it is also the source of natural cellular antioxidants. When they looked at detached cells, they found raised levels of highly oxidising reactive oxygen species, which they reasoned could be a second line of defence against tumour generation in detached cells. ’We were curious what would happen if we neutralised the reactive oxygen species [without using ErbB2 to restore glucose transport], and that’s when we got this really surprising result,’ Brugge says. ’By simply treating the cells with antioxidants, we were able to maintain normal levels of ATP in the cells.’

The researchers checked to see if the antioxidants were also promoting glucose uptake, but they weren’t, so the team reasoned that the cells must be getting energy from another source. ’Other labs have shown that matrix-attached cells can use fatty acid oxidation as a source of energy when they are deprived of glucose,’ says Brugge. That suggested that perhaps the detached cells weren’t able to exploit that pathway because the reactive oxygen species were inhibiting it. ’We found that fatty acid oxidation was severely reduced in detached cells, but that it increased on treatment with antioxidants.’ This meant that treating cells with antioxidants, rather than preventing the formation of tumours, allowed the cells to bypass another natural defence mechanism.

’The really interesting thing that this work shows is that the physiology and metabolism of the cells change profoundly after detachment,’ comments Doug Conklin from the University at Albany Cancer Research Center in Albany, US. ’The fact that the chemistry of these cells is different could possibly regulate whether or not they go on to become metastatic [form tumours at other locations around the body].’

Conklin was also interested in the team’s findings about using fatty acid oxidation as a source of energy: ’Fully-fledged tumour cells aren’t eating fats - they spend a lot of energy synthesising fatty acids, so using them as an energy source would be a futile cycle,’ he says. ’I think the explanation could be that Brugge’s group are looking at normal breast cells that have only just been detached, so they may still have [metabolic abilities] that tumour cells have lost.’ This could give some insight into how the cells’ metabolism changes in the early stages of tumour formation.