Any colour so long as it's green

New anti-microbial polymer coating can be applied from aqueous suspension.

Surfaces in hospitals, kitchens, schools, and just about everywhere have to be scrubbed clean and sterilized all the time to make sure that potentially harmful bacteria don’t settle on them. In a move that could end the chores, Andreas Fuchs and Joerg Tiller from the Freiburg Materials Research Center (FMF) in Germany have developed a polymer coating that kills microbes on contact and thus renders a surface permanently sterile without releasing a chemical into the environment. 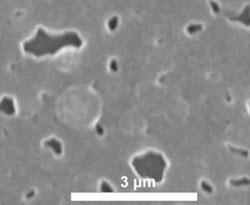 Alexander Klibanov, who led a previous research effort addressing the same target (Chemistry in Britain July 2001, p19) explains what has been improved: ’This study describes a potentially useful, "greener" approach to making non-leaching anti-bacterial coatings. Fuchs and Tiller employ water-based bactericidal paints instead of the previously developed ones based on organic solvents,’ he told Chemistry World.

The crucial trick is that Fuchs and Tiller used an antimicrobial emulsifier to keep insoluble polymer particles in aqueous suspension, from which they can be applied to any kind of surface. This emulsifier consists of a hydrophobic polystyrene block and a hydrophilic block made of the known antimicrobial agent poly(4-vinyl-N-methylpyridinium iodide) (P4VMP). Varying the composition of the polymer itself, the researchers found that a combination of equal parts of polystyrene and butylacrylate gave the best fusion between the particles, leading to a smooth and closed coating, which completely prevents the growth of Staphylococcus aureus cells.

Furthermore, as Tiller explained, ’the coating is not only active on the surface but also in the bulk. Thus, you can scratch it and it still works.’ Apart from the possible use of the new recipe as a long-term sterilizer, the authors also see potential for their antimicrobial emulsifier in commercial water-based paints, which often contain toxic water-soluble biocides, which might leach into the environment. Combining the functions of emulsifier and antimicrobial agent in one molecule might eventually deliver an altogether greener paint.