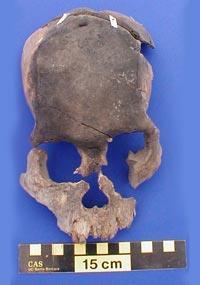 So-called trophy heads, left by the Wari Empire in Conchopata, central Peru, have distinctive holes drilled in the top. Contemporary paintings reveal the skulls had a ceremonial role. They appear to have been skinned, smashed and burned prior to burial. Controversy surrounds whether the skulls’ original owners were revered locals or enemy outsiders.

’That’s the big question,’ said Kelly Knudson of the Center for Bioarchaeological Research, Arizona State University, US. There is a long history of ancestor veneration in the Andes, often performed using skulls, so that might be the explanation. Equally, the skulls - of men, women and children - could be victims of raids on rival communities.

’Very different treatments of the dead, but they might look similar archaeologically,’ Knudson told Chemistry World.

Knudson used strontium isotope analysis to address the question. The ratio of 87Sr to 86Sr provides a distinctive geologic signature. The Sr isotope ratio in bedrock is reflected in adjoining soil, plants, and animals, she said.

Geologists have not yet measured Sr isotopes in the bedrock near Conchopata, so Knudson’s team looked at how the isotopes are taken up by local guinea pigs. ’We let the guinea pigs average all the strontium isotope values in one field, so we can use one guinea pig and potentially get the information we would get from, say, 10 rocks.’

The Sr isotope ratios measured in non-trophy heads were all alike, indicating they had eaten foods from the same geologic zone all their lives. The trophy heads had much more variable enamel and bone Sr isotope signatures.

’Given the high variability in the trophy head Sr isotope signature, it is unlikely that these individuals represent venerated local ancestors,’ Knudson told the ACS National Meeting, in Atlanta, US.

Knudsen’s work is interesting, Robert Tykot at the University of South Florida told Chemistry World. The Sr isotope ratio in bones and teeth reflects a person’s diet, and Tykot had wondered whether locals might be eating food imported from somewhere else. Knudson said the research so far suggests that the population of Conchopata at the time the trophy heads were created - 550-1000 AD - ate only a local diet.