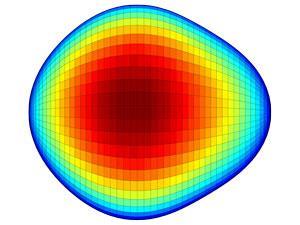 The core of an atom isn’t always a perfect sphere. The strong forces between protons and neutrons can squash nuclei into different shapes, like rugby balls or flattened spheres. Now, an international team of researchers led by Peter Butler from the University of Liverpool, UK, has found evidence that the radioactive nuclei of some radon and radium atoms are lopsided like pears. The lopsided atomic nuclei may help to refine nuclear theory, as different model have predicted slightly different pear shapes.

To measure the shape of nuclei, the team created unstable isotopes of radon and radium at CERN’s Isotope Separator facility ISOLDE, and fired them at metal targets as particle beams. This excites the nuclei and causes them to radiate gamma rays. Differently shaped nuclei emit different patterns of radiation, so a gamma detector can be used to measure the pattern and work out the shape of the nucleus. This is exactly what the team did – and spotted the elusive pear shape for nuclei of radium-224 and radon-220 atoms.