Helen Blackwell, a chemist at the University of Wisconsin-Madison, US, has developed compounds that can target specific bacteria to prevent them from cooperating with each another, leaving them more vulnerable to antibiotics.

About 30 years ago, scientists realised that the bacteria in a growing colony use simple organic molecules to communicate with each other. This allows them to regulate the size of the community, and collectively form a polysaccharide coating. The coating forms an impregnable biofilm that prevents antibiotics from reaching the bugs.

’We wanted to design some compounds to interrupt these conversations,’ said Blackwell. Stopping the bacteria communicating doesn’t reduce their numbers, but it does prevent them from teaming up. The strategy is relatively new: ’there are only about five labs worldwide who are working in this area,’ said Blackwell.

In her latest research, Blackwell has proved that the conversation-stopping compounds can be tailored to silence specific species of bugs living in mixed communities - rather like interrupting only English-speakers at a multilingual UN meeting. 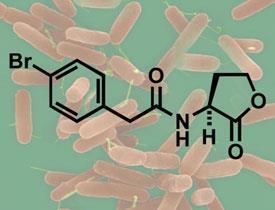 She and her team have produced a series of N-acylated L-homoserine lactones, key signalling molecules used by Gram-negative bacteria. At least two compounds are good at blocking biofilm formation in Pseudomonas aeruginosa, a widespread and otherwise harmless bacterium that causes disease in burns victims or patients with compromised immune systems.

The researchers found that adding a halogen atom to an aromatic ring in their compounds was enough to make the compounds highly specific - and that simply switching the halogen atom’s position in the ring could retarget its activity to a different strain of bacterium. ’We didn’t believe such a tiny change could have that effect, but it does,’ said Blackwell, who presented the research on 10 September at the American Chemical Society conference here in San Francisco.

Blackwell’s team used efficient microwave synthesis to make their conversation-stopping molecules. ’This makes for quicker and often cleaner chemistry,’ said  David Spring at the University of Cambridge, UK, who is also researching the use of lactones against bacteria in this way. Rapid microwave synthesis has helped Blackwell’s team build large libraries of analogous compounds in mere hours, which can then be screened against bacterial cultures.

Since the compounds are not actually killing the bacteria, there is no selective pressure to drive the evolution of antibiotic resistance, said Blackwell. ’These compounds don’t kill the bacteria - they just keep them from behaving badly,’ she said. The molecules are also cheap and easy to make, and the group are seeing early success in treating infected worms. It’s some of the most significant work in the field to date, commented Spring.

Blackwell thinks that if the compounds prove themselves in clinical trails, they could be particularly useful as a routine preventive treatment for any patients that are vulnerable to bacterial infection.