Following an explosion at a US plant last year, Bayer CropScience is slashing its stock of toxic methyl isocyanate

One year after an explosion that led to two fatalities, Bayer CropScience is to eliminate 80 per cent of its methyl isocyanate (MIC) stockpile at its Institute, West Virginia site. Bayer will spend $25 million on further safety improvements at the site over the next year, including underground storage tanks for MIC, the chemical that killed thousands after the Union Carbide plant accident in Bhopal, India 25 years ago.

The runaway reaction last August at Institute - a sister plant to the Union Carbide one in Bhopal - did not involve MIC. The Institute plant was bought by Bayer in 2002 and since then the company has reduced its stockpiles of toxic chemicals such as MIC and phosgene. 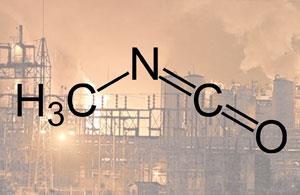 A malfunction in the methomyl plant used to make Larvin pesticide led to a residue treater rupturing and flying 15m through the air, according to the US Chemical Safety Board (CSB). The CSB is in the process of completing its report on the incident, but in an interim statement, CSB Chairman John Bresland highlighted significant lapses in process safety management, including inadequate training on new equipment and operators overriding critical safety systems.

The methomyl plant explosion occurred just 25m away from a vessel containing around 6 tonnes of MIC used by Bayer as a pesticide raw material. Bayer now says that the methomyl plant will not be rebuilt, and that it will cease to produce MIC-based pesticides within a year, although other processes on site will still require MIC. Bayer said that it aims to attract new businesses to its 465-acre site, and plant manager Nick Crosby has assured the local community that no jobs will be lost as a result of the methomyl unit closure. Bayer has also installed dedicated emergency phone lines and appointed an emergency services leader.

Maya Nye, a spokesperson for local group People Concerned About MIC, says that Bayer has had to work hard to regain resident’s trust: ’Bayer refused to communicate with us and emergency response officials about the dangers that existed that night,’ says Nye. In April, a US House of Representatives committee found that Bayer CropScience had deliberately withheld and destroyed information after the explosion.

Bill Buckner, Bayer CropScience president and CEO says: ’While MIC was not involved in the explosion at the Institute site in August last year, we have taken seriously the concerns of public officials and the site’s neighbours, and we are making very substantial changes in how we operate our facility in the future.’

Nye says her locals are delighted with Bayer’s latest announcement and that ’Bayer should be commended for taking a first step to addressing a 25 year old concern, especially without laying off any workers.’ However, until it is removed completely, residents are still fearful that the remaining 20 per cent of the MIC is sufficient to cause a disaster as large as Bhopal. Following Bhopal other plants around the world reduced large-scale MIC storage.

Bayer will buy methomyl from outside sources to make its Larvin pesticide. MIC requirements will be reduced due to the US Environmental Protection Agency (EPA) revoking approval for the pesticide carbofuran. Bayer was producing MIC for its tenant, FMC Corp., to make carbofuran at the site. However, Bayer will continue to use MIC to produce aldisol, an ingredient in the pesticide Temik, and carbaryl, an ingredient in Sevin for the time being.