Mitochondria, often called the powerhouse of the cell, have been harnessed in a new battery-like device that could one day power small portable devices like mobile phones or laptops.

Mitochondria convert fatty acids and pyruvate, formed from the digestion of sugars and fats, to adenosine triphosphate (ATP), the cell’s energy supply. Along the way a tiny electrical current is generated, and Shelley Minteer and coworkers from Saint Louis University in Missouri, US, have now harnessed those flowing electrons to put them to work in a new biological battery device.

Speaking at the American Chemical Society national meeting in Boston, US, Minteer described how her team has built a biological battery that incorporates whole mitochondria capable of producing a current anywhere from microamps to milliamps per square centimetre, depending on the surface area of the mitochondria and the load density. 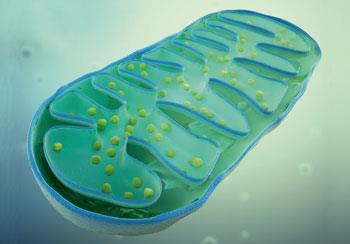 Mitochondria generate energy within cells, and could now be tapped in new bio battery devices

Minteer notes that commercially available batteries contain metals, and need to be recycled. However, battery recycling facilities aren’t widespread in many areas.   ’My research is about transitioning from these metal-based batteries to a biological battery,’ she said. ’The living cell does energy conversion very efficiently.’

Similar to a traditional battery, the bio version contains two electrodes. The cathode houses the conversion of oxygen to water, while the anode holds the immobilised mitochondria. ’Once the substrate comes in it can be completely oxidised to carbon dioxide, and when that happens, electrons go through the wire and do work.’

The bio battery is completely renewable and biodegradable, and is stable at room temperature and a neutral pH for up to 60 days. Minteer says the new batteries would be best suited to small devices that have intermittent use.

Right now, the test cell is in an open glass container in the lab, but for future commercial use, it would be in a hard plastic container. The fuel, any high energy dense liquid, would be added through a sealed, disposable cartridge that would be replaced as needed.

In the future, Minteer wants to increase the surface area within the device so they can increase the loading density of the mitochondria because at the moment they’re limited by the amount can put on the electrode. They’re also looking at ways to improve the energy density output, and reengineer the size of the device to be as compact as possible.

Evgeny Katz, an expert in biochemistry at Clarkson University in New York, US, describes this as ’an extremely interesting approach,’ because the mitochondria can ’consume the whole biochemical, producing much more energy and power from the oxidation process’. He was also impressed with the very high stability of the mitochondrial battery. ’In most biofuel cells, the critical issue is not only how much power you produce but how long you can get it,’ Katz explains.