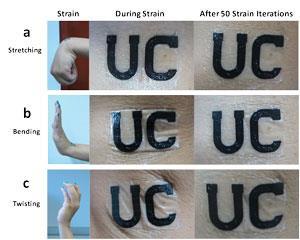 The tattoo can survive being twisted and stretched by everyday movements

As healthcare becomes more personalised, researchers are developing new ways to monitor the body on a continual basis. Wearable biosensors provide a solution but in order to be effective they need portable power. To avoid the need for batteries a Californian team has created a biofuel cell tattoo that can scavenge energy from sweat to generate electricity.

To date researchers have investigated systems that produce energy from glucose and oxygen in the bloodstream. However, these are invasive and need to be implanted in the body. The team from the University of California San Diego in the US has sidestepped this by using a fuel found on human skin – lactate in sweat.

Lactate is formed when the body cannot generate enough energy from aerobic respiration. Anaerobic respiration is triggered, converting glucose or glycogen to lactic acid, generating energy in the process. Joseph Wang and his team have taken advantage of this to create a biofuel cell that uses a lactate-oxidase enzyme at the anode to oxidise lactate to pyruvate. A cathode, based on platinum particles, reduces the oxygen present, and together they power the cell.

Wang and his team tested the cells on human subjects, printing the biofuel cells as temporary tattoos and applying them to the arms of exercising individuals. In trials, Wang found that the power produced while exercising ranged from 5 to 70µW cm-2. Fitter individuals produced less lactate and therefore generated less power. However, for fitter subjects Wang suggests the biofuel cell could be coupled with an energy storage device. ‘One may envision a fit user to continuously wear the tattoo biofuel cell and generate energy, which will be stored in the wearable storage device. Over time, the stored energy can be used to power other devices,’ he says.

The redox reactions that occur within the biofuel cell

Serge Cosnier, who works on implantable biofuel cells at the University of Grenoble, France, thinks the research is a real advance. Unlike pacemakers, biofuel cells are difficult to sterilise and put in the body – Wang’s approach gives researchers an alternative, says Cosnier. Additionally the amount of oxygen available to implanted cells is limited. ‘With [the sensor] outside the body there is more oxygen for the biocathode,’ says Cosnier.

Shelley Minteer, at the University of Utah, US, says: ‘It’s an application that probably doesn’t require nearly as much invasiveness in terms of the person but yet also opens up some real applications in terms of self-powered sensors.’

Wang says the current system is proof-of-concept, but could be used to power devices such as low-energy LEDs. With further improvements, the team hope to be able to power diverse devices, such as wearable biosensors used for glucose monitoring.